Skip to content
Posted on September 20, 2011January 20, 2015 by Andrew
When we arrived in Casablanca we haggled with a taxi driver to take us straight to the Hassan II Mosque, which is the second largest religious building in the world (behind the mosque at Mecca).
The photos don’t do it justice at all. 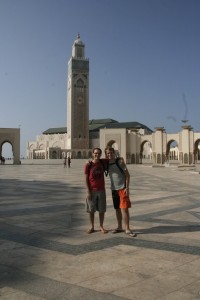 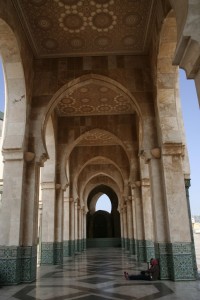 From there, Paul checked out the art gallery while Frankie and I made our way along the pseudo-european beachfront for a swim.
Frankie came up with an ingenious way for us to swim together without endangering our valuables: we put everything important in her little bag and buried it under mine.
It didn’t occur to us until we were in the water that if my [worthless] bag got nicked, we’d have no marker to find our valuables. Suddenly didn’t feel like such a good idea!
We then walked for what seemed like hours to a lighthouse that had seemed like a great landmark when we’d been looking at it from afar. Eventually we found our way back to the hotel and Paul.
We finished off the night at a cute little shisha bar.

Unfortunately, something I ate didn’t agree with me… and let’s just say I got up several times in the night and I feel guilty for not tipping whoever had to clean our bathroom!