Climbing a holy mountain at 2am will leave you dazed at the best of times, but add a million stars and a few dozen bellowing camels into the mix and I defy you not to feel like you’ve stepped into a Christmas carol.

We even had heavenly activity in the form of a lightning storm over Saudi Arabia while we were waiting to be picked up from our hotel in Dahab. Having disappeared only for a quick snooze after a tiring day, watching a lightning storm over Saudi Arabia while drowsy at midnight felt rather like an episode of the Twilight Zone.None of us thought we got any sleep on the two hour drive to Mt Sinai, but clearly we must have as it only felt like it took half an hour – including the two abrupt awakenings as the driver swerved to the correct side of the road to avoid a head on collision. Egyptians have somehow decided that the safest place to drive in the middle of the night is right down the centre-line, like a slot car. I’m not sure if it’s just a misguided road safety tip or actually an attempt to subvert would-be kidnappers – who apparently operate in the area.Either way, we were quite glad to arrive at the base of Mount Sinai.It starts off easy. For the first 45 minutes or so, you’re barely going uphill at all. It’s quite a pleasant stroll, and it’s quite exciting realising that you can’t see any light at all besides the moon and your torch. And ahead of you, the torches of others form a large daisy-chain of lights far up into the distance. We reached the first rest stop with minimal exertion and then patted each other on the back.When Rachael asked how much ground we’d covered so far, our Bedouin guide started laughing. Apparently this stop was the first of six, and it merely signalled that we’d reached the start. My bad.I started to distract myself from the climb by staring up at the stars. I was overwhelmed by the sheer number of them – more than I’d ever seen. Several rest stops and around 90 minutes later, I almost overbalanced when I caught the sight of a shooting star out of the corner of my eye. Having never seen one before, this gave me quite a lift! Some of the others reported seeing three or four. My eyes were clearly too focused on avoiding camel poo to notice the rest of them.
About half an hour before the summit, the path reached its steepest point and became a series of abrupt steps. Being allergic to exercise, it took all my strength not to sit down on every fifth one. But sunrise was approaching quickly – and we’d climbed all night for the promise of dawn so weren’t about to waste any time.At the point where strong winds hit the trail, a group of Bedouin shopkeepers make a killing lending blankets to climbers. They’re great as long as you don’t mind smelling like camel. At about the same point, the trail reaches a point where you can see the horizon stretching in front of you. I was suddenly aware that an impending glow had rendered my torch obsolete, and switched it off.

For some reason, I always imagined the summit to be rather large and flat. Perhaps with a nice grassy patch. I guess I always thought it would have to be quite roomy in order to fit both Moses, God, and the two stone slabs that became the ten commandments. But it’s really quite tight on the top, and there are dozens of grannies and nuns who worked as hard as we did to make it, so every climber jostles for the best spot like a queue of Ryanair passengers.

Fortunately, Rachael found us a wee spot around the way and down a bit. The rocks were somewhat precarious – and of course there was no safety railing – but most importantly we could sit alone as a group and feel proud of our efforts as we waited for the sun to surface.

Around ten minutes later, we let out a collective gasp when a sliver of intense scarlet light became visible. Though we’d been anticipating its arrival, the sun was far larger and more brightly coloured than we’d expecting. It wasn’t hard to see why the Ancient Egyptians considered the sun the most powerful of gods. 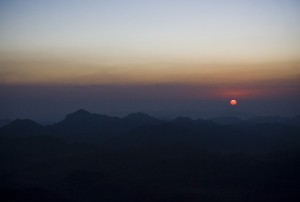 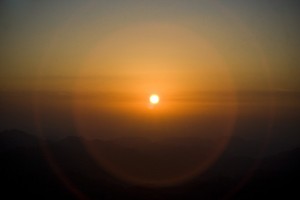 We spent around 45 minutes at the top taking photos, sitting in silence and watching the sunrise, talking about some of the many events that had happened there, and even singing Leonard Cohen’s Hallelujah.

Then, it was time to begin the trek back down. We opted for the lesser-known route: 3,750 steep steps directly down the side of the mountain. The path was created by a monk who intended its climb to be used as penitence. I can barely comprehend how hard it would have been in other other direction. Long before reaching the bottom, most of us were getting the yips – our knees threatening to twitch at exactly the wrong moment and fling us down to the rocks below.

The way down felt vastly different to the climb up. Partly because it was steeper and there were no camels, but mainly because the sunlight enabled us to see the immense canyon we were climbing. As a kid, I always imagined Mt Sinai would resemble the mountains I was familiar with – grassy and fertile. But it turned out to be more like the Grand Canyon: vast, bare, red, and rocky. 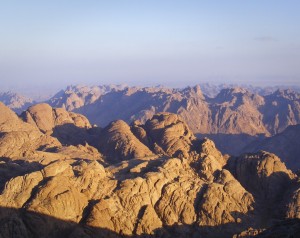 Our descent took less than half the time our climb had taken. At the base of the mountain, we visited St Catherine’s Monastery – the oldest Christian church in the world. Sadly we weren’t able to go inside, as we were pressed for time to get back in time for our onward journey to Jordan.

Later that afternoon, we found out that other tour groups had been cancelling their Mt Sinai climbs following kidnappings in the Sinai area. I’m relieved that I didn’t know this in advance as it may have made me uneasy about taking part. And I’m stoked that our group were fortunate enough to have to opportunity.

I spent the night in a Christmas carol, and it was choice as.