I’m completely exhausted. Going to Universal Studios, Disneyland and Disney’s California Adventure in one day will do that to you!

We got up early to make it to Universal Studios just after opening. We got the rides out of the way first, to beat the queues. On the Jurassic Park ride, Paul’s jeans got soaked completely through. Doh! 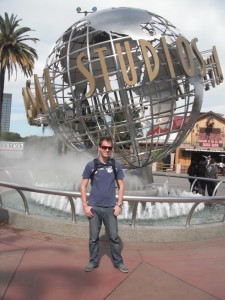 The highlight of the park was definitely the Studio Tour, which included a trip up Wisteria Lane and a new King Kong thing that Peter Jackson designed.

When Universal closed, we headed to Disney’s California Adventure to see their unbelievable new light, water and laser show: World of Color. We were lucky – when we asked the information desk where to go, the girl behind the desk gave us two fast passes from people who had just left the park, which gave us the perfect front row spots! We got soaked, but it was worth it.

It absolutely blew our socks off. Though by now it was 10pm, we got our energy back and decided to cross over to our third park of the day, Disneyland, and stay until closing.

We had enough time to do the teacups, It’s a Small World, and the Finding Nemo Submarines before catching the last shuttle back to our car just after midnight.

It was 1:15 by the time we got to bed. I have no recollection of my head hitting the pillow.