You know that feeling when you open the dishwasher just after it finishes and the steam devours you and you can’t breathe or see?

That’s what it feels like in the jungle. All the time.

Our much anticipated 10 day jungle retreat was cancelled two days before we arrived in Iquitos, Peru – the largest city in the world that is completely inaccessible by road.

We couldn’t find any similar jungle retreats online that had availability, but an information centre gave us a flyer with phone numbers for a few. We called about seven, but only one answered. Their English was as weak as our Spanish. All we understood was that they would pick us up the next day.

What could possibly go wrong, we thought.

They collected us in a rush at 10:30am. We drove for an hour, then they gave us gumboots. It turned out that two nights ago in the heavy storms the road had collapsed in three places, which we would need to cross on foot.

After passing the third road slip, we hopped on a three-wheeled mototaxi for another hour into the middle of nowhere. Along the way we saw three huge bird towers. Thousands of massive black birds swooping and spiralling like one organism in the shape of a tornado. I thought they were bats at first. Edgar Allen Poe couldn’t have written a better omen.

We were dropped on the side of a nondescript country road, where our guide led us deep into the jungle.

I was grateful for the gumboots.

We slipped and slid our way through mud pools and on planks over swamps. I kept hearing rustling movements from the trees and was curious about what was nearby. 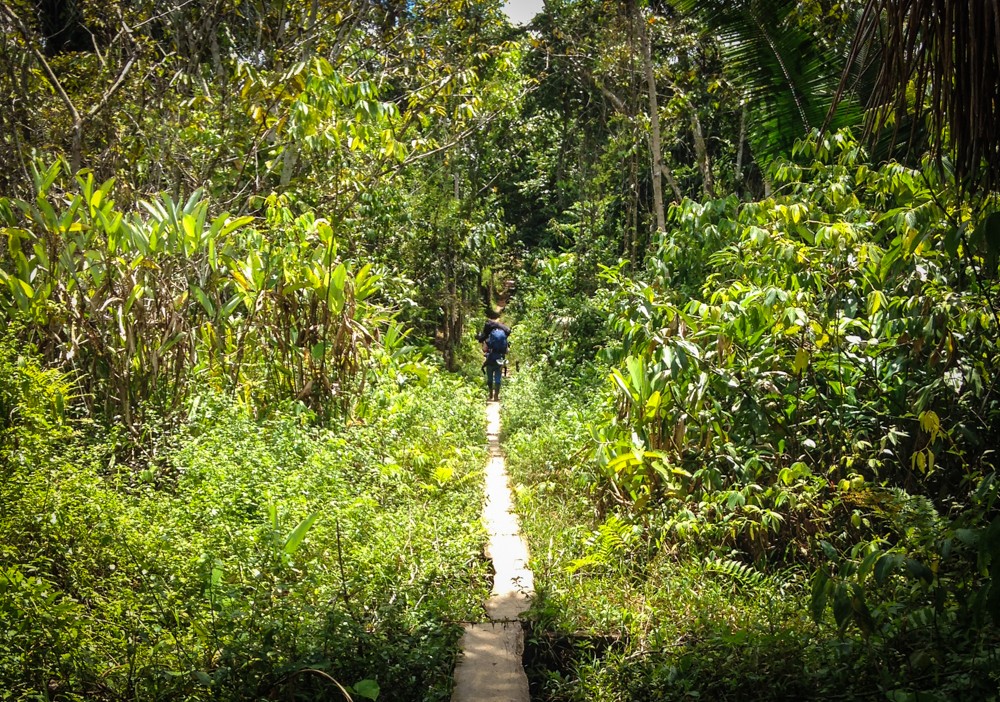 Then the planks stopped, and we had to wade through mud that reached almost to the top of our gumboots. It felt like walking through knee deep glue.

About an hour later, we arrived at the camp, sweating like snowmen in a sauna. 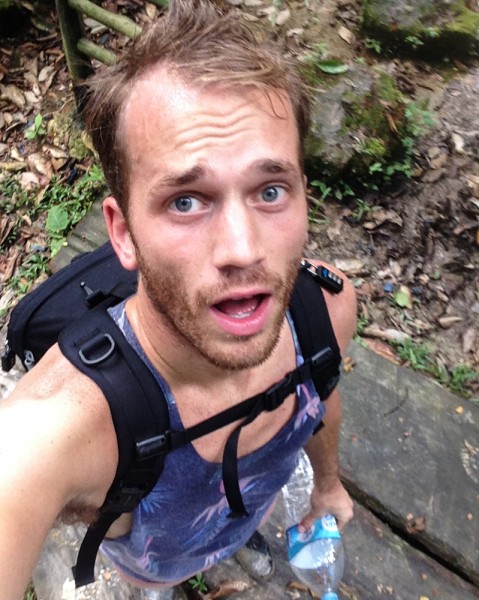 Rebecca, my travel buddy, immediately got stung by something. It was really painful and bled but the guides didn’t seem to care. So far so good. 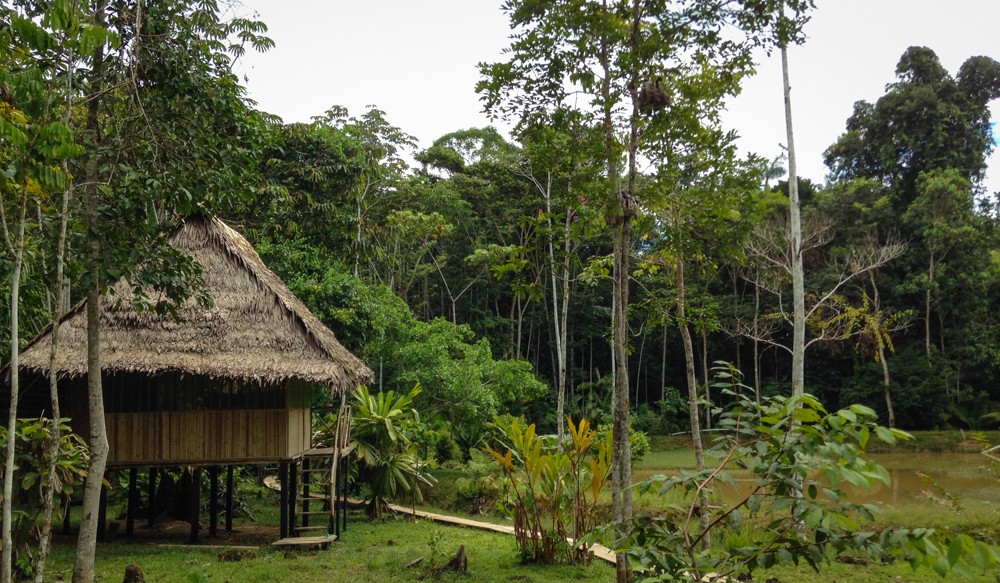 We met a lovely French lady called Ines. She was staying for two months. She told us how she’d visited this camp three times now, because she loved reconnecting with nature, and the medicine from the shaman.

That morning, Ines had found a six foot anaconda in her bathroom.

It came to eat the huge rat that had in turn been eating Ines’ leather toiletries bag.

And it wasn’t docile. It greeted her at eye level, 30cm from her face. Ines reenacted the encounter by swaying from side to side, squinting her eyes, and baring her teeth.

She noped out of there.

We also met a nice Canadian guy called Thomas. He’d been in the camp for a month but was leaving the next day because of the bedbugs. His legs were covered in open sores.

He said he used to have an anger problem but thanks to the isolation of the jungle he felt better than ever.

When Thomas arrived, he told us, the rain had lifted the water level and the mud we’d crossed was waist deep. He could see big snakes swimming past him.

Suddenly I felt like I was in way over my head.

I was surrounded by things that wanted to kill me, and I was with the kind of people who would treat a snakebite with vanilla beans and positive thinking. If I get bitten, I want a helicopter and a hospital.

Everyone had the same kind of hollow eyed, shellshocked look about them. They were all clearly malnourished but they sang the praises of the camp and its resident shaman. It was a little incongruous.

I think I accidentally joined a cult.

At 4:00 we had a floral bath, an Amazon custom that also happens to feel extremely cult-like.

Step One: get in the muddy brown Amazon river and wash yourself (!)

Step Two: panic when you see two dinner plate sized spiders on a nearby tree.

Step Three: get freezing cold water (and flowers) dumped on you.

Step Four: panic for the next half an hour whenever little flowers fall from your head onto your body and you think it’s a jumping spider.

We were told there would be no dinner tonight because of the ceremony. Um, ok.

I was clever enough to not bring a torch, so my only light was the one on my phone. As the sunlight disappeared, I was all too aware that my ability to see would last only as long as my battery.

And did I mention the 6 foot anacondas?

We arrived for the ceremony at 6pm as instructed. I had no idea what to expect.

We met in a large octagonal hut built on stilts over the river. Around the edges were eleven thin mattresses; one for each guest.

Outside, a woman was singing beautiful but eerie Peruvian music.

I tried my best to remain positive and open-minded. Sure, it was out of my comfort zone, but I crave interesting travel experiences and this sure fit that bill.

After an hour sitting in silence, we got called up to the shaman one at a time. He sat on a throne thing surrounded by bottles. He handed me a cup.

It tasted like when you vomit in your mouth and then swallow it again. Or how I imagine the witches brew from Macbeth would taste. Eye of newt with a hint of bile and turpentine.

Everyone else had brought water to wash it down but I forgot mine.

I felt like it was burning my throat so I had to borrow Rebecca’s water. You’re not meant to talk to each other in any way so that was a fairly desperate move.

And then they blew out the candles. The moon was dim so it took over 15 minutes before I could see a single thing faintly illuminated in the room.

And then everyone else started groaning.

It was horrible. They all sounded like they’d been hit by buses.

And then it kind of hit me: we’d all poisoned ourselves. I’d literally drunk the kool aid handed to me by a Peruvian shaman cult leader in the Amazon jungle.

Other people in the room were making horrible noises. Like a combination of groaning, crying, scratching.

I sat there for what felt like hours but didn’t have any of their symptoms, for which I was grateful.

I passed the time by trying to imagine I could see the stars through the roof.

They came round offering more ‘medicine’. No thanks.

My stomach was churning. I had to go to the toilet, with my phone as my light. I checked for snakes before I sat down.

Over five hours after it had begun, the translator thanked us and said the ceremony was over.

And then the smoke started to really get to me. I felt the back of my throat get dry, and I started to retch. I puked my guts into my bucket.

Trust me to wait until after the ceremony.

The translator asked the guy who had sounded the most violent how he was feeling. He said he’d never felt better in his entire life.

Back in my hut, I counted three large wasps and four larger cockroaches. I didn’t even care, more concerned with the potential presence of any large snakes and spiders the light from my phone may be failing to illuminate.

I couldn’t sleep. Not for hours. I was so tired and I just wanted to be anywhere else. The holey net and my industrial strength repellent were no match for the mosquitoes and bed bugs. I could feel them all over me, ravaging me, all night. Good thing I took my malaria pill.

I needed the toilet but held it until dawn, terrified of encountering an anaconda in my bathroom in the dark.

Outside, the noises of the jungle were louder than a jumbo jet. Several times I could hear unmistakable growling right outside my hut. When I told Ines about it the next day, she said it was a jaguar.

I didn’t even know they had those here.

I made up my mind to leave. Thankfully, Rebecca had come to the same conclusion on her own, and we had a brief moment of hysterical laughter as we regaled our experiences. The camp was certainly not at all what we thought we had signed up for.

I’m all for interesting, horizon-broadening, even difficult experiences. But joining a cult in the jungle was just a smidge too far.

Unfortunately, we were made to find our own way back. So I can officially say that I have navigated my way through knee deep mud in the Amazon jungle alone.

I hate to think how many snakes, spiders and jaguars we passed. Sometimes it’s better not to know.

Back in Iquitos, we ended up getting cheated and spending the night in a seedy hotel with a shower that was neither warm nor clean.

It was the best shower of my life.