As the train began to lurch forward, someone grabbed me. I turned and saw a man from the lowest caste, the untouchables. His left eye was milky white, and the right one was missing. He used a stick to help him walk. Through a large scar on his head, I could see his ivory coloured skull had a crack in it.

He wasn’t asking me for money. He just wanted me to get out of his way. I was standing in the middle of a cramped aisle in his carriage. My backpack, though not too full, was cumbersome, and the space was so tight that I couldn’t turn around. I managed to back up and then open the door to the toilet so I could angle inside to let him pass.

The toilet was little more than a hole in the bottom of the train. Clearly this was the kind of train that lurches, judging from the state of the floor. I imagine the smell was horrendous, but by this point my nose had thrown the towel in.

It was my first night in India.

Ten days ago, I had quoted fares from New York to India out of pure curiosity, and been shocked to find one for just $95 plus taxes. After the stars aligned (or conspired) in my favour, I quickly set about organising visas, plotting a route, and booking the train journeys that would stitch together the various pieces of my trip.

Or, at least, attempting to book them.

The Indian train system is the largest reservation system in the world. They have over 30 million passengers every day, and a website that appears to have been made in 1992.

I’ll spare you the details, but it took me 7 days and 17 calls to India to actually get a login to book a ticket. I also then had to wait until 1:30am New York time to check that it actually worked, because the website is down for four hours a day (and that’s just the planned outages). Thankfully, after literally hundreds of failed attempts, I finally managed to book tickets.

But, of course the train I wanted was full by this point. Thankfully, the Indian public are notorious for cancelling tickets. There’s a very complicated waitlisting system that relies on last-minute cancellations, and a whole infrastructure of third-party websites that can predict your likelihood of getting a confirmed ticket.

For this particular journey, I had booked six tickets, with the intention of cancelling five. My best chance was on the Mangalore Express, which had a 93% likelihood of success.

And the website was down all day, so, despite checking every 20 minutes all day as I explored Mumbai, I had no way to know all six of my tickets had been cancelled until I got to the station.

When I finally found out my tickets were worthless, I was bounced around several different queues all over the station before finally being told that the only way I’d make it to Goa was if I purchased a general ticket.

The general ticket line had at least 300 people in it, with two people serving them. By this point, my train was in 20 minutes.

A kind man took pity on me and helped me cut to the front of the line and purchase a general ticket for the price of a New York subway ride. This was a 12 hour train.

When he ushered me onto the carriage just in time, I tried to tip him, but he refused, telling me to pay it forward.

My cancelled ticket had been for an air-conditioned carriage, sharing a compartment with just three others. There would have been bedding, a light, power, and a way to securely stow my bags.

I found myself in a carriage that had none of these things, and at least 200 people in it. Everyone stared at me like I was a purple alien.

The train rumbled forward, clanking like the tin man with a stomach ache. That’s when the untouchable man grabbed me, and I ended up in the toilet in order to let him past.

I decided to walk up the carriages until I found the controller. Perhaps I could bribe him to let me sleep in the bed of someone who hadn’t shown up? Surely there’d be one.

I passed a mother who hid her face from me. A child selling chai tea from a large thermos. A third gender person in a fuchsia sari with gold trim who was clapping her hands and blessing people for tips.

It was extremely difficult to walk up the carriages, and I wasn’t having any luck finding the controller. A young newlywed couple took pity on me and let me put my pack on the end of their bed while I waited. This section was the lowest sleeper class, with bunks stacked three high. There was no bedding, and the mattresses were paper thin. The walls were an unsettling shade of pale blue, lit with fluorescent bulbs that made everything look radioactive. Large fans on the ceiling looked like relics from WWII, and did little to cool the humid Mumbai night.

But I was grateful to put my pack down. 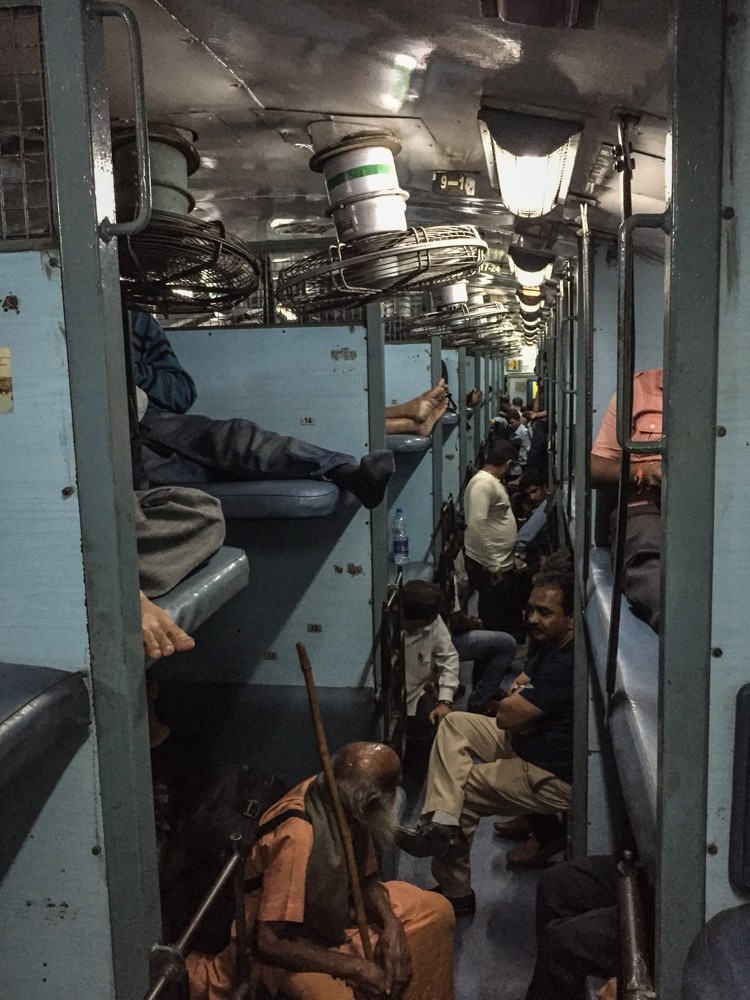 When the controller came around, he fined me twice the cost of my general ticket for sitting in the wrong class (still cheaper than a big mac combo so I didn’t fight it). I offered him double if he could find me a bed, but he told me the train was completely full. I got the impression that he’d have happily taken my bribe, but truly didn’t have anywhere to put me.

After around two hours, the carriage was beginning to set up for the night. I was still standing. Having spent the previous two nights on overnight flights, I had been battling exhaustion for hours already. I had no idea how I would survive the night standing. The newlyweds again took pity on me. “Tourists shouldn’t have to stand”, they said. As the husband climbed to his tiny mattress on the top level, he gestured for me to follow him, telling me we’d sit at each end.

I was endlessly grateful.

When I got up there, the reality of my precarious spot became apparent. The beds are designed to lay flat on; with the roof about 30cm above your nose. To sit upright, I had to both slouch forward and bend my neck completely to the left in order to fit. And of course, as I was sharing the tiny space, I couldn’t straighten my legs either. There was no barrier on the edge of the bed. If I slouched too much in my sleep, I would fall the entire height of the carriage down to the floor.

The ceiling behind my head had a covering barely thicker than tinfoil. On it, was a handprinted skull and crossbones with “danger: hi voltage” scrawled beneath it.

I had planned to take a sleeping pill and wear a face mask on this journey, but my luggage, though locked, was unsecured. I was too concerned about its safety to risk a deep sleep. I hid my passport down my underpants.

I couldn’t sleep, but it was too dark to read, and my phone was on 7% so I didn’t want to drain it just killing time. Every three or four hours I’d check it to see how much time had passed. It was never more than 45 minutes.

I’d been warned about the cockroaches. As I peered down, I could see dozens of them scuttling about, climbing all over the people who were stretched out on newspaper sleeping on the floor.

But nobody warned me about the spiders.

At 3am, I opened one eye to find a large spider dangling from its web directly in front of my face. As an arachnophobe, it was all I could do not to wake the entire carriage with my screams. Hit with an instant jolt of adrenaline, I managed to swipe the thread it was dangling from. At which point, of course, it climbed back up it ONTO MY HAND.

I shook my hand violently over the edge of the bed and managed to free myself from its deathly clutch.

I do feel sorry for the poor sod on the ground who it probably landed on. Hopefully it at least had the decency to devour a few cockroaches for him.

At about 5am it started to get light.

When I climbed down to stretch my legs, I saw a family with four young kids in the next compartment sharing a container of chai tea and large round poppadoms. They offered me some. Just grateful for the opportunity to stay out of my contortionist’s tomb a moment longer, I said yes. And then, I reached into my bag to see if I had anything to share, when I spied a familiar gold wrapper.

Kat had given me a block of my favourite chocolate: Whittaker’s Berry & Biscuit. What a find! I tore it open and hastily shared it out. Some of the other passengers began to stir, and peer in. I gave a piece of chocolate to anyone who wanted one.

As I sat there, seeing the grins of the children as they smeared chocolate on their teeth and laughed, I realised how stupid I had been. I’m not the one who gets to complain about this experience.

People who travel are the luckiest people in the world. How ridiculous for me to feel sorry for myself for being on this one train, when I was surrounded by hundreds of people for whom this journey was the highlight of their year.

I made it off the train safely, with all my luggage.

When I got to my accommodation in Goa, I went straight to bed. It was 9am. I slept for 19 of the next 24 hours.