Skip to content
Posted on August 16, 2012January 20, 2015 by Andrew
For a city so dependent on tourism, I find it fascinating that Athens doesn’t have any attractions from the last few millennia.
Like most visitors to Athens, I found the Acropolis and the ancient Agora enchanting. They’re the only places where we encountered crowds, despite coming in August. The modern part of the city is a distinct contrast – filled with boarded up windows and abandoned building projects. A sort of modern ruins. And the Acropolis, high on its proud hill, casts the entire modern city in its shadow. 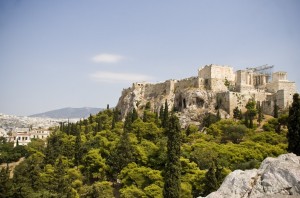 It’s undeniable that Athens was in its prime thousands of years ago, and I find it curious that what Athens used to be, even in ruins, is so infinitely more interesting to modern visitors than what the city is today, even compared to other ‘ancient’ cities like Rome and Cairo.
The effects of the global recession and ongoing eurozone financial crisis are easy to observe in Athens, and despite its remaining charm, I can’t help but wonder if the Acropolis will remain intact long after modern Athens has itself descended into ruin.