Skip to content
Posted on December 30, 2011January 20, 2015 by Andrew
The guy who picked us up at the airport looked like a James Bond villian. This was my first thought after laying eyes on the optimistic looking elephant holding a sign with my name on it. He looked like he could tip over a forklift. The second thought was “I wonder if he has KGB connections?” The third was “I wish I’d paid the extra 15% for a guy who speaks English!”. Before the fourth, I’d fallen asleep in the passenger seat of his tiny Lada. He obviously understood where to take us, because I drifted awake in time to see some Cyrillic symbols that vaguely resembled Izmailovo Gamma Delta, our hotel in the 1980 Moscow Olympic Village.
The next morning, we took the metro directly into Red Square. 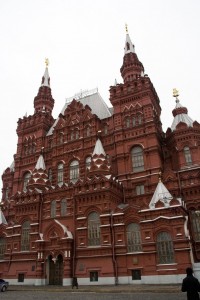 Before laying eyes on anything we recognised, we could tell we were in Russia. The architecture was so intricate, and every building looked like it should be in the guidebook. 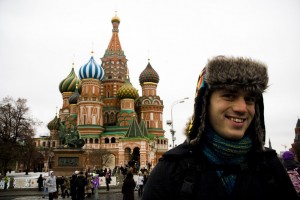 Without a word to each other, we walked all the way towards St Basil’s Cathedral, until there was nothing left to do but go inside!

As we walked in the first thing I noticed was that there was no communal space. No big worship area like I’m used to seeing in ordinary cathedrals. Instead there were several small altars. The largest one had a group of four men singing some sort of mournful Russian song in perfect harmony. I wasn’t sure if they were busking or just singing for the heck of it, but I listened through the iron gate for ages.

Back in Red Square we popped into Gum – an enormous department store. During the Soviet era, Stalin turned Gum into offices, but now it’s like an enormous shopping mall. I can’t decide whether I prefer it that way. 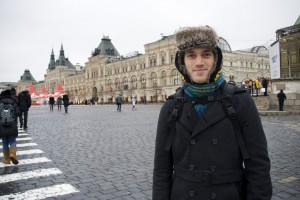 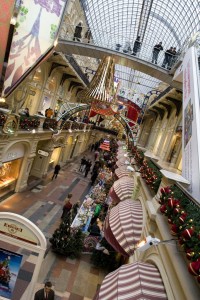 Naturally, the next step was the Kremlin, including the biggest bell in the world (202 tons). Which has never actually been rung, because it broke while it was still in the cast. Stink! 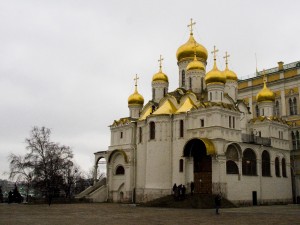 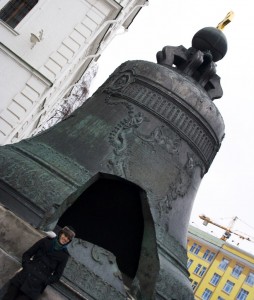 The next goal of the day was to see ice sculptures. It failed miserably (see the Life Lesson), but on the bright side we did get to walk along the river bank (for miles and miles!) while it was getting darker. 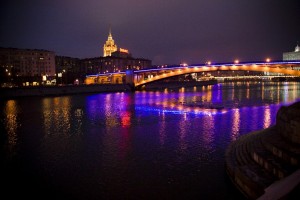 We sort of got to see ice sculptures. Or at least, we got within zoom photo distance. It’s funny. I didn’t realise what the sculpture was of until I processed the photos and saw these two one after the other! 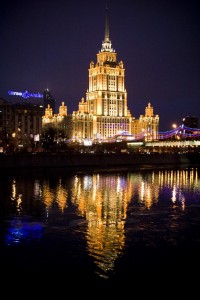 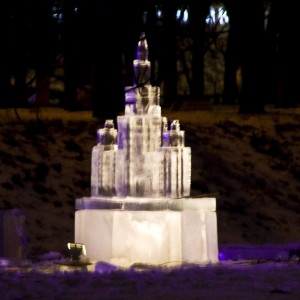 Cold and tired, we wandered for what felt miles, until accidentally stumbling across the largest shopping mall I think I’ve ever seen. This monument to capitalism feels at odds with former communist Russia, so it was kinda surreal. 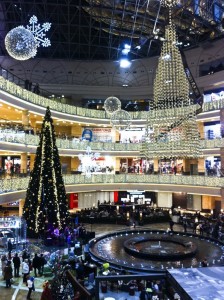 We slept very, very deeply back in the Olympic village.

2 thoughts on “Day One in Moscow”