Perhaps counter-intuitively, I’ve wanted to go on a cruise ever since I saw Titanic at the age of 11. The fancy dining halls, the Irish dancing, the soaring music at sunset; what’s not to love?

My best friend Kat left New Zealand for Dubai three months before I skipped off to the Americas. When she decided to join me in New York for summer, the idea of the Grand Birthday Caribbean Cruise was born. 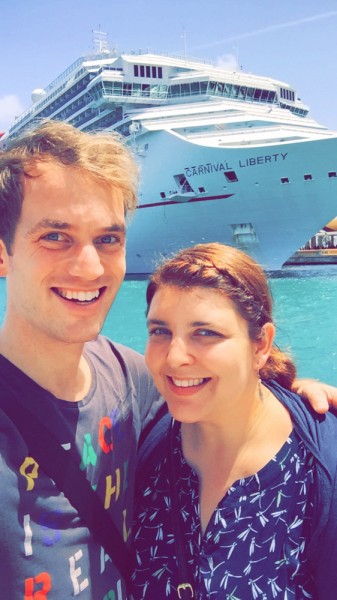 And so, we found ourselves boarding the Carnival Liberty in San Juan (Puerto Rico), on an itinerary that had me choking back tears of joy: St Thomas (US Virgin Islands), Barbados, St Lucia, St Kitts & Nevis, and St Maarten.

But, before I show you all the gorgeous Caribbean pictures, I have to prewarn you that the punchline of this post is that I realise cruises aren’t for me… which feels kind of horrible to say. Like the height of ungratefulness. So I will show you a picture of a monkey sitting on my head to stop you from cursing me. Because nobody can hate someone with a monkey on their head.

But I want to separate my comments on the lifestyle of cruising from the Caribbean itself, because this part of the world is spectacular.

I mean, who wouldn’t love the warm, turquoise water of the US Virgin Islands. 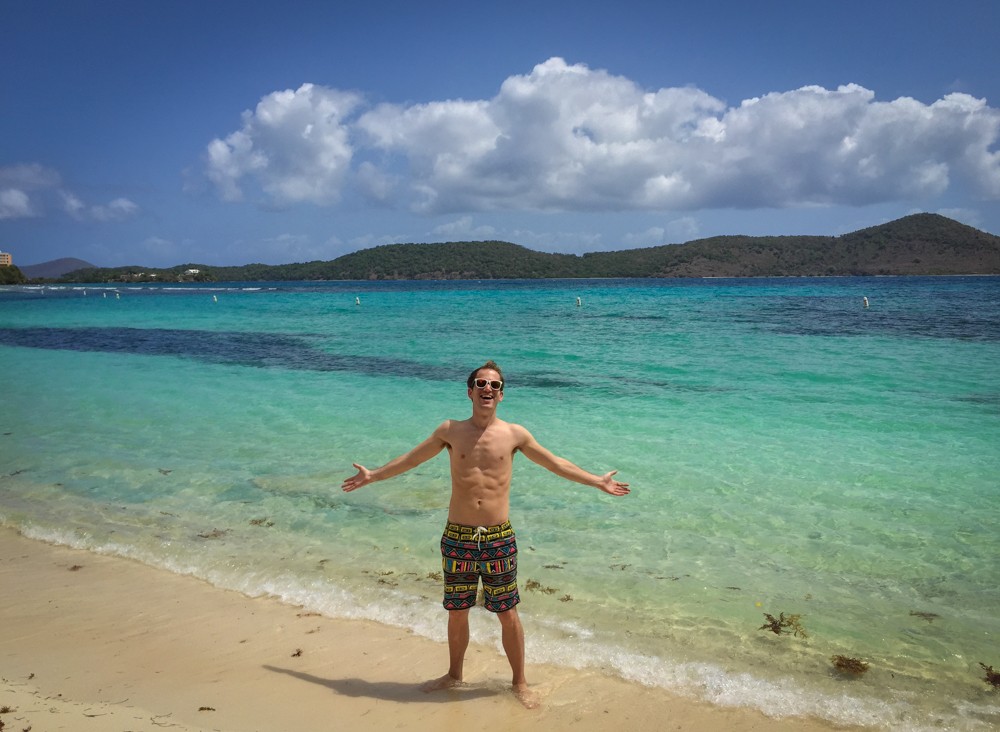 Or reading a book under a palm tree in St Kitts, just feet from the beckoning sea. 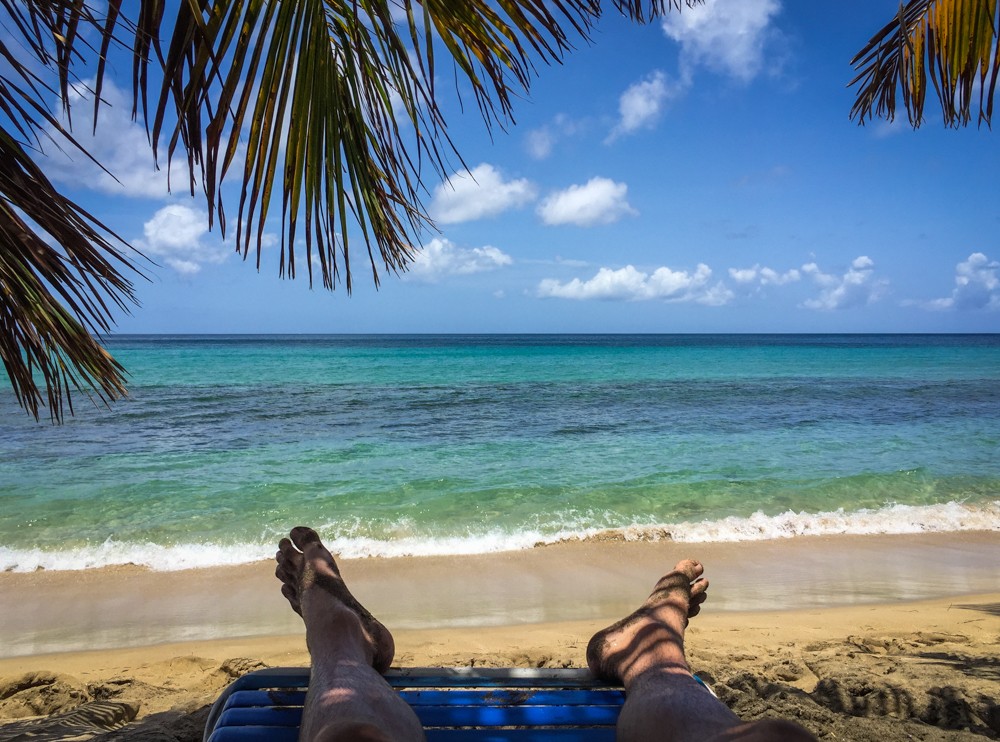 Drinking cocktails on the deck, by the waterslide. 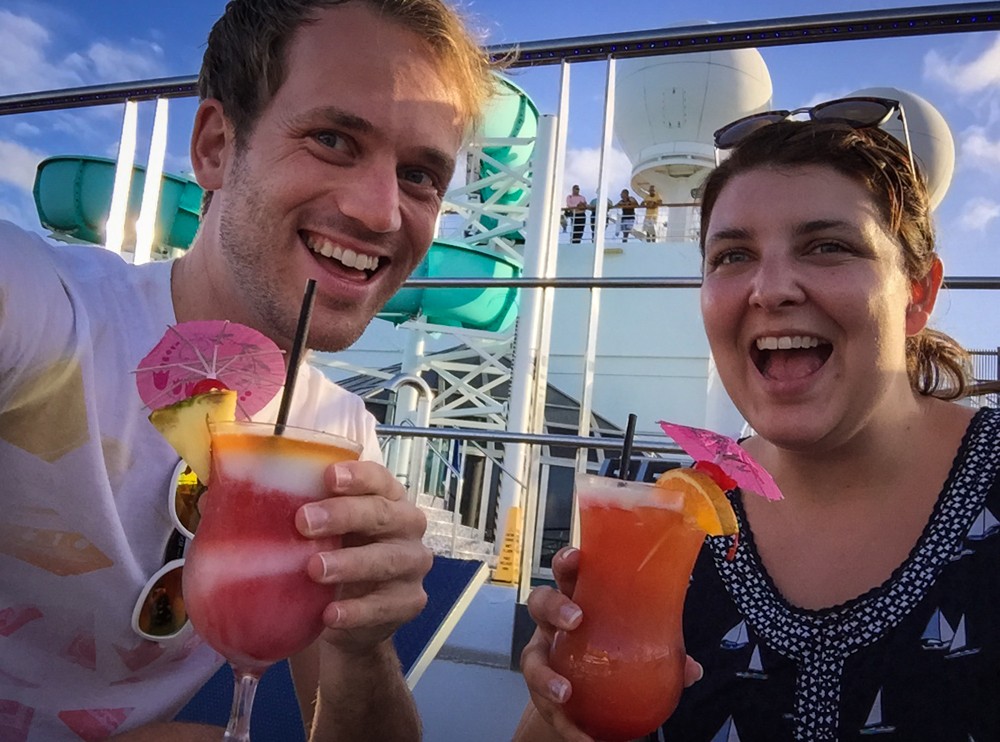 And sometimes, being able to see an entire island nation from a single vantage point. 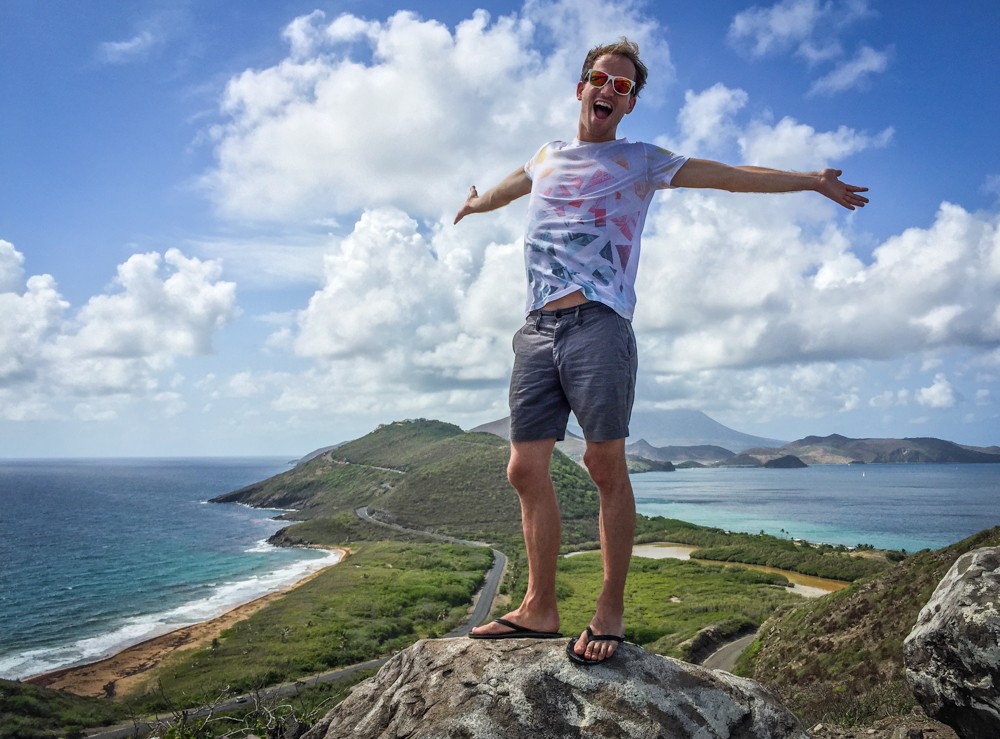 But, I can’t gloss over the fact that cruising changes the way you experience a place. And life on board isn’t always as glamorous as it sounds either.

In no particular order, here are 10 things I learned on my first Caribbean cruise:

1. Nobody else is on their first cruise

Cruisers are a particular breed. We didn’t meet a single person who had been on fewer than four cruises (and we kept asking – it became a game!) Our favourite interaction was with a couple we call “Alabama”, who felt the need to point out to us a little too quickly that he wasn’t her sugar daddy. Other notable guests include “Utah”, who was swimming with a cast on his arm and full neck brace (he just casually broke his neck last week), and “Texas”, who took more pills with breakfast than the average AIDs patient. 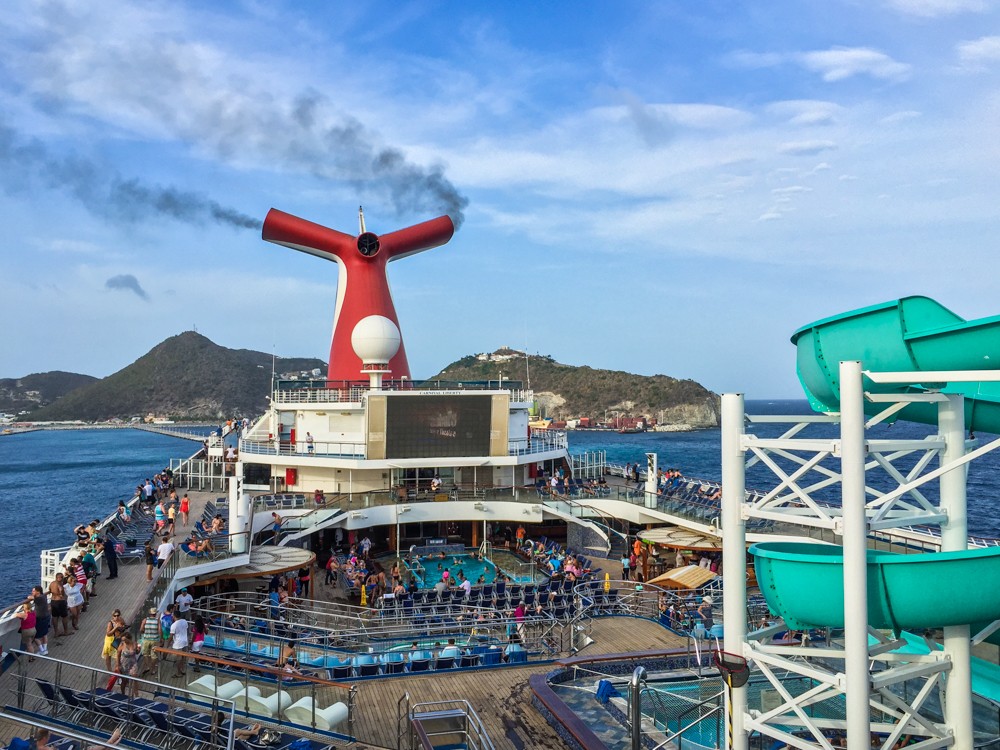 The dining room is lavish, and the plates are enormous, but quantity trumps quality and the mass-produced food was just like eating at Ikea. Sometimes quite nice. Sometimes really bad. But never particularly delicious. The one thing we kept hearing again and again from our fellow guests was how amazing the food was. This just… wasn’t our experience. And I think people were so impressed by the swanky surroundings that they didn’t notice they were being served sweetened cardboard.

3. It’s all about getting off

The best part is definitely when you arrive at a new destination, and you tell the cab driver “take us somewhere where nobody else on this boat will be going”. Every single other traveller will be going to the same beach – which is probably lovely when there isn’t a cruise ship in port. But when you’re bringing 2,500 other holidaymakers with you, finding your own slice of deserted paradise is as rare as it is wonderful.

4. Choice is an illusion

The dining room serves a different style of cuisine every night! We got to taste everything from “Classic American” to “Tastes of America” to “American Favorites”. It’s all pretty much the same thing, regurgitated slightly differently. You can choose to dine in at a ‘fancy’ restaurant, serve yourself from the buffet, or order Mexican, Asian, pizza, burgers, fish & chips, or deli sandwiches. On your first day, it seems like there’s a world of choice. But by day three, you realise that everything is American style and tastes roughly the same no matter where you choose to eat.

Our cabin was serviced twice a day by a (usually) friendly cleaner named Octavio. And the second time he came through, he would always leave behind an adorable little animal for us. (Extra points for giving us two animals on my birthday). 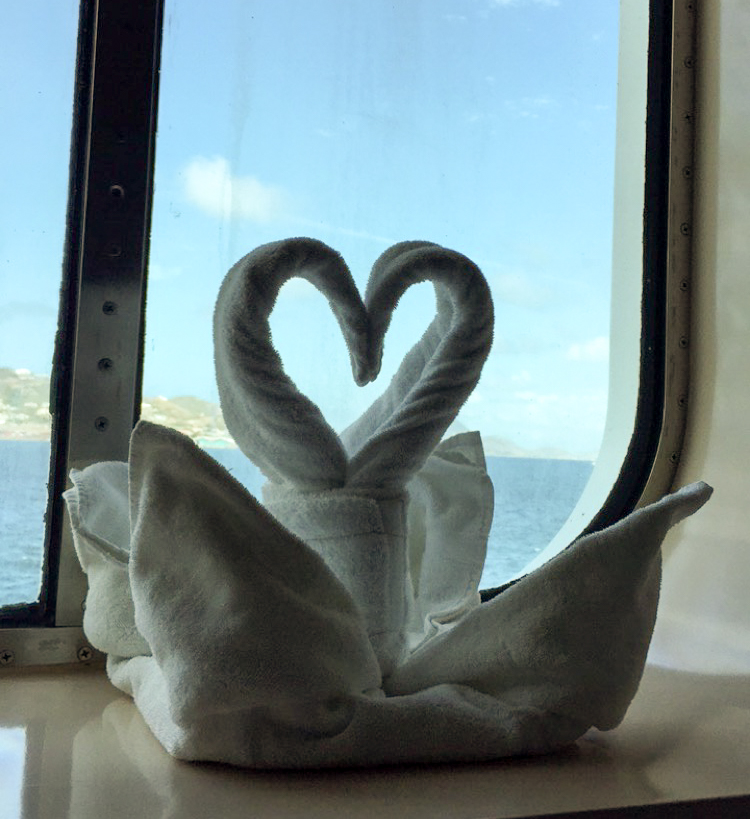 6. All food is either sweet or extra sweet

Every meal on a cruise ship comes with a side of diabetes. From the meat, to the baked beans, to the bread, to the fish, to the pasta salad: everything tastes like it has been pumped full of sugar. And the things that you’d expect to have sugar? Double it. The apple juice is concentrated so strongly that it’s the colour of coke. The cakes are so sickly that you can barely eat a spoonful.

7. You don’t need to pre-book excursions

The pre-booked excursions were almost all $100+. We used the excursions list to figure out what we wanted to do, then found our own way to do it upon arrival – usually saving around 50%.

We purchased duty free alcohol to prevent overspending onboard, but soon discovered there was a BYO ban. Thankfully, my shorts had a lot of pockets, and the guards seemed oblivious to the fact that I sounded like the Tin Man when I walked…

9. Entertainment is hit and miss

I’ve heard wonderful things about the shows and performances on other cruises. Ours weren’t particularly exciting. Bean bag bingo, anyone? How about “Hits of the 80s”? But Kat and I were pretty happy to spend our nights in the spa on Deck 12, so this didn’t bother us too much.

This one blew my mind. Order whatever you want (except alcohol), and it will be delivered to your room for free. Craving a chicken fajita wrap at midnight? Done. Can’t get out of bed without a coffee and fruit salad? No problem. Can’t be bothered queuing for lunch? One hand-delivered BLT coming right up. And I can neither confirm nor deny the rumours that we snuck salmon and cream cheese bagels off the boat for a free lunch in Barbados. 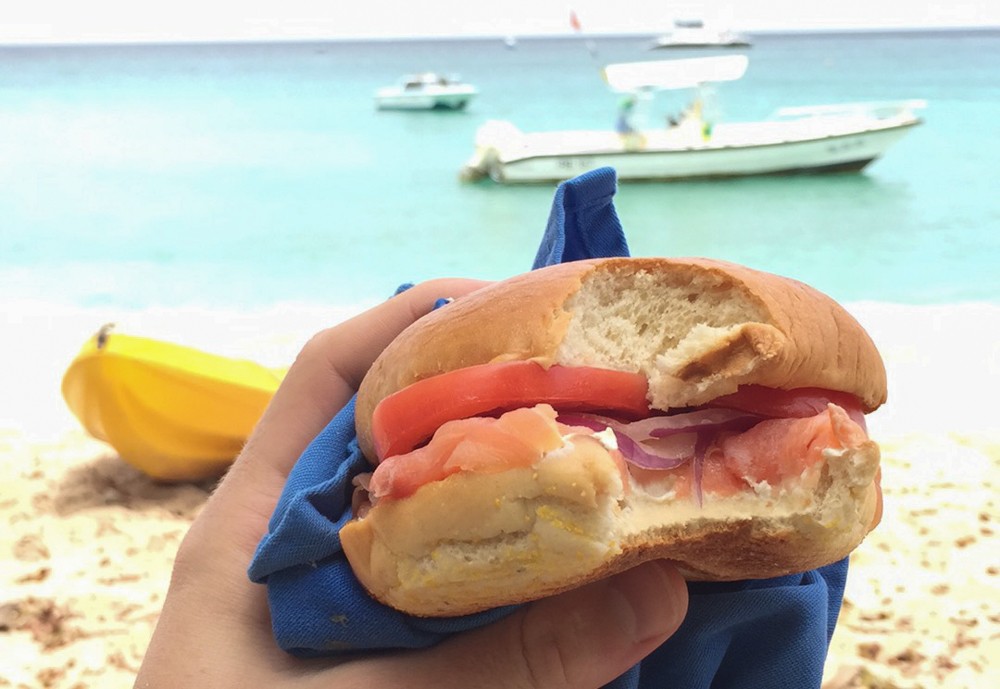 Everything considered, I’ve realised that cruising isn’t for me.

There’s fun to be had, but I would rather explore a new place on my own terms – even if that means I have to forgo the buffet.

And now I leave you with the most adorable moment ever; a photo that was too cute not to include even though it didn’t really fit. 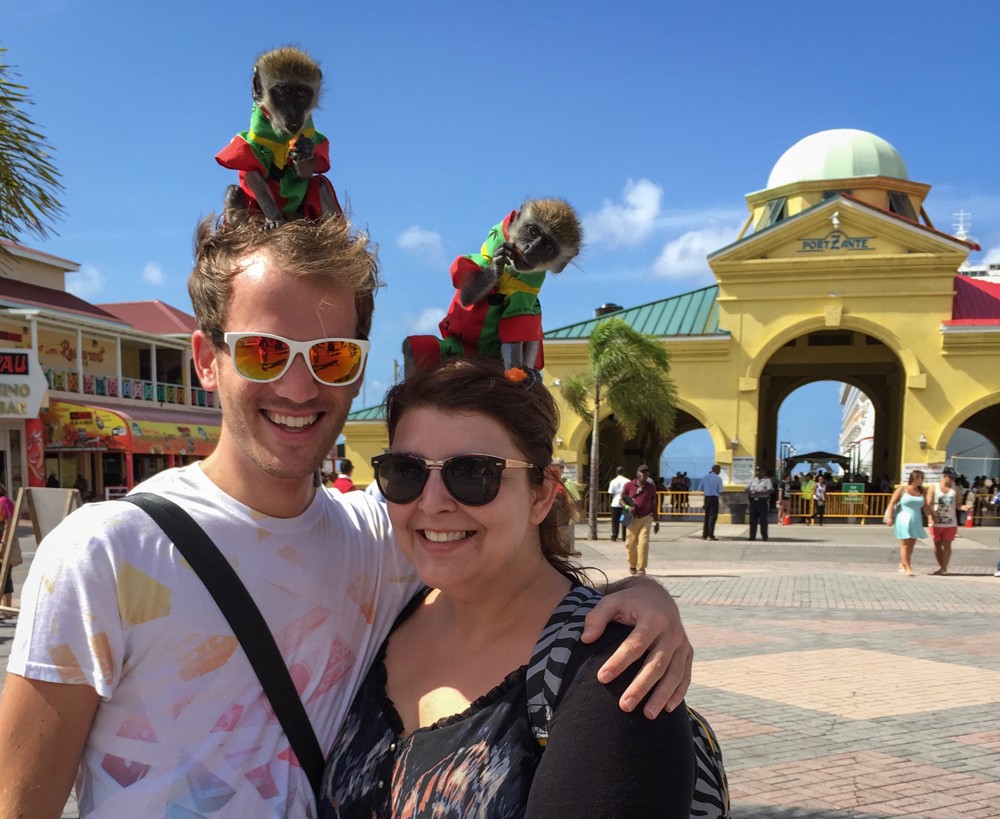