Skip to content
Posted on July 10, 2012January 20, 2015 by Andrew
I’m following a steep trail through enormous gum trees. Every few steps a red butterfly or scurrying lizard catches my eye. The air is fresh and were it not for the glimpses of turquoise water between the trees, it would be easy to believe I’m in a large forest. I’m starting to break a sweat.Though the UK may still be grey and miserable, there’s a tiny slice of the Caribbean on the continent, and somehow I managed to find it.

As I round a corner, suddenly I’m aware of the sun beating down on my shoulders. The path continues to climb upwards until I’m higher than the tops of the gum trees I was walking through.

To my left, I can see another of the Cíes islands. Ahead of me lies my reward: the lighthouse at the highest point on the island.

About half an hour later, I arrive. And what a sight. 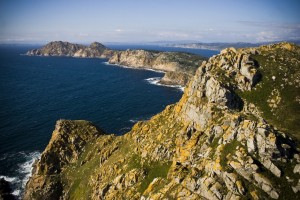 After soaking in the rugged magnificence of this spot for as long as I can, I start to feel like I could shout without a soul hearing me. So I do.

I discovered Islas Cíes quite deliberately. I wanted to spend my birthday on the most beautiful unblemished beach in Europe. I thought I’d end up somewhere in the Mediterranean. But The Guardian told me in its list of the best beaches in the world to come here, in rugged northern Spain.

Seeking to balance a spate of city breaks, I was thrilled to learn that the only accommodation on the island was in the campground. I bought a cheap tent from Amazon and dutifully paid the Ryanair excess baggage fees to cart it to the island.

Food on the island comes from one of two restaurants which are a lot like the serveries from school camp. There are no English translations so the menu felt like a food lottery. I stared wistfully at others’ paella, Spanish omelettes and sausage platters and hoped that the unknown dish I requested would be one of those.

Unfortunately whatever I ordered was Spanish for “two McChicken patties and a side of fries”. You live and you learn!

There are several gorgeous beaches on the island, and the next day I spent a pleasant afternoon walking around the rocks to find a small cove I could have entirely to myself.

I really had to pinch myself when we were leaving. I felt like I’d spent my birthday in paradise. And the highlight was definitely sitting on the edge of a flat rock on the highest point, with the sun warming my back and the wind teasing me to jump. 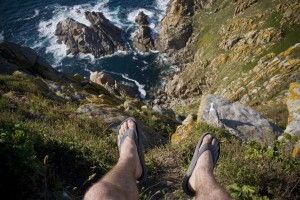 Islas Cíes will always feel like my personal secret – a special place where solitude enables the kind of personal reflection that opens a new chapter in your life. It’s so much more than a beach holiday.