Skip to content
Posted on July 10, 2011January 20, 2015 by Andrew
I hate getting older. But at least this year I had the beautiful island of Korčula to make everything seem better.

Korčula is about two hours north of Dubrovnik, and I had been tipped off to how great it was by others who had visited.

The atmosphere is relaxed, the water crystal clear, and the food well priced. We stayed for hours.

We walked around the coast for a bit until we found a secluded spot where we could swim alone. We sat on the rocks and dangled our feet in the water, until Paul’s leg was grabbed by a huge tentacle. He screamed and fell in. We still don’t know whether it was a squid or an octopus, but it sure was funny! 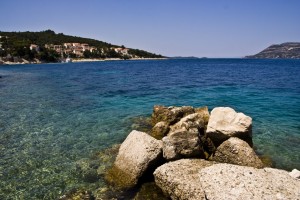 The trip back to Dubrovnik takes you through the main wine producing region of Croatia. Our driver took us to one of the wineries where we stayed for around an hour trying the local specialties, including one they’d served the pope only two weeks earlier!
When we arrived back in Dubrovnik, we bought some birthday cake in a bakery. Back in our room, we wrote postcards. I sat backwards when I’d finished, and sat backwards. Onto the cake. Not my finest moment.

Once I’d cleaned the chocolate of my butt, I looked up and saw the sky lit up like it was on fire. Sunset in Croatia is so dramatic! 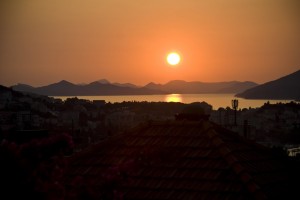 We headed back into the old town before it got dark. The sky kept changing hue.

Dubrovnik sure put on a good show for my birthday. I don’t think it had anything to do with it being the opening of the Dubrovnik Summer Festival, and the President being in town or anything.

People lined the streets. I know I’ve used the word festive a lot these past few weeks… but there’s no other word to describe it! Beautiful choral music filled the streets as thousands tried to catch a glimpse of the ceremony. 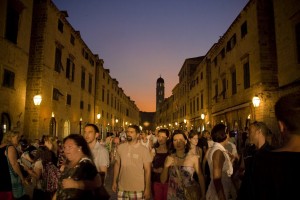 At about 10:30, Paul and I sat by the beach to watch fireworks over the harbour. They were spectacular.

The perfect end to a great birthday and a great trip. We flew out the next morning. I forgot to send the postcards.

5 thoughts on “Quarter of a Century in Korčula”