Skip to content
Posted on December 11, 2011February 5, 2015 by Andrew
Today I learned that you can’t lie to a Swiss train guard.
That they are humourless is no urban myth.

I’m ashamed to admit that it was a calculated decision… because everything is so expensive in Switzerland that we brought all our own food from home, and could only afford to sleep in a prison cell. The price for a single ticket from Zurich Airport to Lucerne is more than I made in a week when I worked at Countdown Lynfield. (Admittedly, I was on $6.46 an hour!)
When we arrived in Lucerne, having taken two trains with nary a ticket inspector in sight, we both immediately believed we had outsmarted the Swiss train system.

“We’ve still got two unclipped tickets!” I whispered as we left the station, taking care to ensure nobody could hear.

“If we pretend to be hapless tourists, we could use them on the trip back to the airport on Sunday!” responded Paul so quickly that I knew he’d been plotting too.

“We probably won’t get checked anyway. It’s worth the risk!” we agreed. 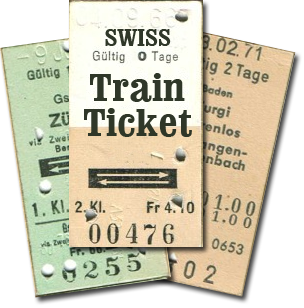 Apparently the new Swiss train fare evasion penalty system took effect today. The Aryan inspector who told me this through clenched teeth about five minutes after the train left Lucerne had discarded my pitiful whimper of “we must have accidentally bought tickets in the wrong direction” without even looking up from his shiny new penalty fare payment machine.

I’ve always been a hopeless liar. Not wanting to appear guilty, I continued to protest my innocence as he barked for my details.

If I’d realised I’d have to keep up the charade for so long, I’d never have bothered. He couldn’t figure out how to work his little machine and ended up in front of us for over 20 minutes, most of them spent with the tech helpdesk feeding him step-by-step instructions on how to work it.

Meanwhile the whole carriage is looking at us like heathen criminals, so I loudly discuss with Paul “how on earth has this happened?” and “is he sure the correct tickets aren’t in his bag” and “we know the guy’s only doing his job but this is so unfair because we did pay for our tickets” etc.

Unfortunately, Paul’s as bad at improv as I am at lying. The first rule of improv is to run with it. You go along with the story your scene partner comes up with, however stupid it may seem.

My scene partner didn’t go along with it. Instead I was met with a ‘don’t bother, no one believes you anyway’ look and, to the ticket inspector, “don’t worry about him, we’ll pay the fine now”.

So I shrank into my seat and hand over my credit card. The penalties have doubled since yesterday. They’re  now three times what I used to make in a week at Countdown Lynfield. And he makes us buy tickets as well.

I always seem to learn Life Lessons the wrong way. Today I’m just glad ‘thou shalt not lie’ isn’t one of the Ten Commandments!