Skip to content
Posted on December 10, 2011January 20, 2015 by Andrew
First time in Switzerland. And it feels fantastic! 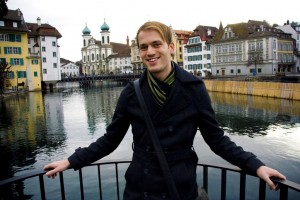 We flew into slick Zurich airport, and are staying an hour away in Lucerne. The Swiss transport system works like clockwork… which figures, I guess!
We chose Lucerne because we felt it symbolises ‘real’ Switzerland. Nestled in the Alps, it’s tiny compared with Zurich or Geneva, has beautiful architecture, a friendly vibe, and jaw-dropping mountain views. 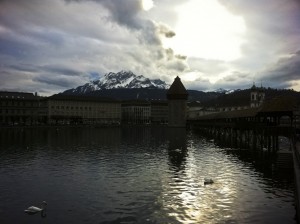 A surprising gem in Lucerne is the statue of the dying lion. It’s carved directly into an enormous rockface. Mark Twain (who spent a lot of time in Lucerne) called it “the most moving and mournful piece of stone in the world”. 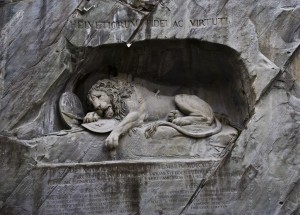 We visited two Art Galleries on the first day. The Rosengart Gallery and the Kunstmusem Luzern. The Rosengart Gallery was special because the entire gallery was donated by a wealthy widow who lovingly compiled it over decades, then donated it to the city. She was friends with Picasso and he painted her several times. As we were about to leave, I saw a familiar glimmer of life in the eyes of the elderly woman walking past me. Sure enough, it was an 80 year old Angela Rosengart! She gave me a knowing look.

Having deliberately put off most of our outdoor sightseeing for Sunday after reading weather reports, we were gutted to wake up to thick fog. Beautiful Mt Pilatus, so epic the day before, wasn’t even visible through the mist.

Unwilling to give up on our dream of going up the Swiss Alps, we visited the information centre for advice. She showed us live webcams that confirmed that the view up Pilatus was roughly like being inside an enormous ball of cotton wool.

But then she showed us another mountain called Rigi, an hour away by boat. And up there it was clear!

We were sold and boarded the boat about four minutes later.

Unfortunately, as we ascended the mountain on the steepest train I’ve ever been on, we realised there was still a whole lot of fog. As we climbed through the cotton wool white-out, we lost faith that it would clear.

Which only made it more wonderful when we eventually popped out above the clouds and saw the perfect view for the first time! The clouds rested halfway up the mountain like a ghostly lake, hiding all trace of anything man-made. We couldn’t see roads, cars, buildings, or even the water!

We walked as far away from the train platform as we could, and slipped and slid our way to the most deserted area on the summit.
Then we sat there and talked and read for an hour. 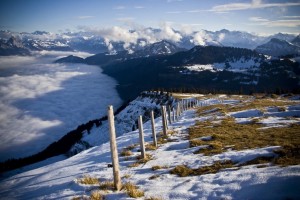 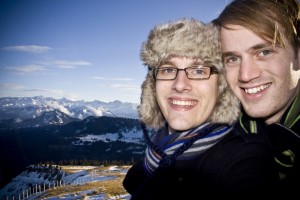 We took one of the last trains back down the mountain, spending our last 20 minutes sharing a mulled wine that, naturally, cost as much as a three course meal would back home!

We unintentionally caught our train back down the mountain just in time for one of the best sunsets of my life; with Mt Pilatus in the distance. 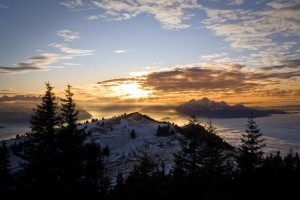 Halfway down the mountain we boarded a cable car. 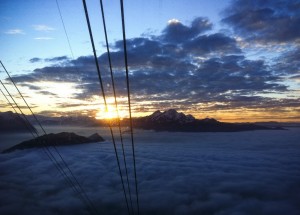 These photos were taken about ten seconds apart. 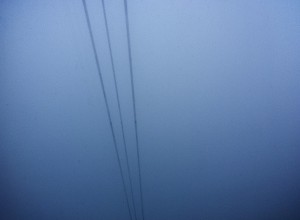 It was comparatively miserable at the bottom of the mountain. We felt like we were in on a secret about what was above the fog.

Still, the lake had a Stieg Larsson-like quality. 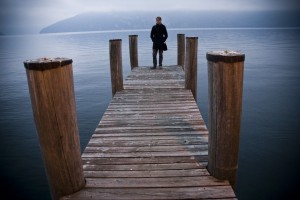 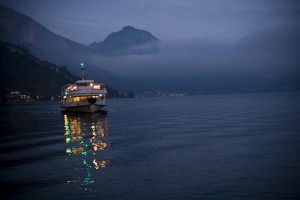 It was dark by the time we got back into Lucerne. The town is lit so beautifully at this time of year, and in the darkness you couldn’t tell the clouds were so low. 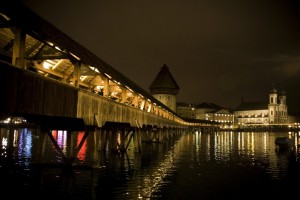 We had one last overpriced mulled wine, then headed back on the train to Zurich.

One thought on “A Weekend in Lucerne”