Skip to content
Posted on January 3, 2012January 15, 2015 by Andrew
Today I learned never to fly overnight and expect to go to work the next day.

It seemed like a flawless plan, except for the part where I had to set my alarm for 2:45am. Ironically, with the four hour time difference, this was actually 10:45pm London time. Yep. I was up and moving before most of my friends and colleagues went to bed the night before!

The only part I was worried about was getting through immigration. I was warned in advance to keep my head down and walk quickly. The scary people must have been home sick today, because we didn’t have a sniff of a problem.

We took off about half an hour late because the plane had been covered in snow and ice overnight, so they had to wash it off with antifreeze. 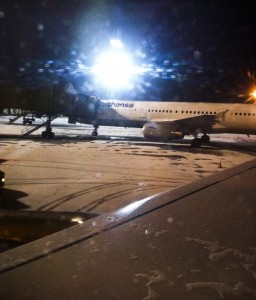 We were in Munich for two hours, then boarded on time for our flight to London. We sat on the plane for over an hour before takeoff, without any explanation.

Our scheduled landing time came and went, then the time we should have landed based on when we took off came and went… we had no idea why we weren’t at Heathrow yet.

Then the pilot came on and said “bad news, folks. We’re being diverted to Stansted!” The one time I get to fly out of a decent airport, and I get rerouted to the worst one. Wicked.

When we landed, the pilot came over the intercom and said “I have zero information, and there’s nobody here to help us”. An hour and a half later, he still had zero information. 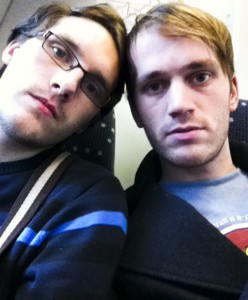 When we were finally able to get off the plane, Paul noticed that they didn’t appear to be refueling or offloading any luggage.
After an hour of waiting for our bags (the one time we fly with bags!) with the other 150 passengers, we were getting restless.
Finally a guy appears and says “we’ll have your bags out soon”.
We hear this many, many times over the next four hours while we’re stuck between passport control and customs with one snack machine, no water until 3pm, and 150 other grouchy displaced travellers, most of whom had missed connecting flights all over the world.
There was nobody from the airline present, nobody from Stansted gave a toss because we weren’t one of their flights, and the phone helplines didn’t know a thing about it.
I started to feel like Tom Hanks in The Terminal.
By the time we actually got our bags I was completely wired. I still wanted to go to work just so my day wouldn’t be a complete waste of time.
So I did. I arrived at 4:30pm, just 18 hours after I left my hostel in St Petersburg. I could almost have got to work in Auckland in that time!
We’re trying to get compensation for lost wages and displacement from Lufthansa… emphasis on trying. Let’s just say I won’t be travelling with them again anytime soon!
Oh well, I guess it could have been worse…