I’m proud of my suitcase. 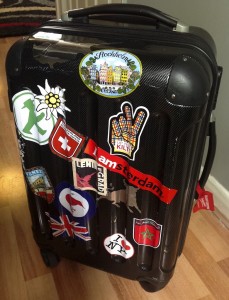 The only mementos of my travels are plastered all over it. When you travel as often as I do, collecting 2D souvenirs starts to seem as desirable as it is practical.

And, when I’m bored in a queue at an airport, I do love being able to stir pleasant memories just by looking at my luggage.

But the best thing about my heavily stickered case is that it’s clearly mine. They don’t come more unique than this. This is the Lady Gaga of carry-on wheelie cases.

I find it comforting to know that nobody is ever going to pick up my case by accident, and that if I ever lose it, it will be easier to spot in a line-up than a one-legged pirate in drag.

When Emily and I step off a train in Basingstoke, I get my first chance to test this theory. About thirty seconds after exiting the carriage, I suddenly realise how remarkably free my arms feel. Because they aren’t pulling anything along behind me.

I’ve left my suitcase on the train!

We’re going camping up north, and without my case I have no sleeping bag, no clothes but the ones I’m wearing (more stylish than thermal), and no toothbrush. Also none of the delicious snacks I bought for the journey.

We sprint back, but the train has already left. We find a station manager and tell him what’s happened. He rolls his eyes.

Emily’s friend Chloe is driving us up to Lincoln and offers to swing past Winchester on the way – the train’s next stop. We beg the station manager to rouse some initiative and radio Winchester with details of the carriage and case, in the hope that someone will be able to run on and rescue it. They promise to.

Then, we hightail it to Winchester. Knowing the train will already have passed through, I try to google a phone number, so we don’t have to bother going to Winchester if they weren’t able to get it off.

National Rail’s website delivers me two dead numbers for Winchester station direct, so eventually I just call the main call centre. I’m on hold for 10 minutes listening to eight bars of Clair de Lune repeating endlessly. When finally someone answers, I ask him to put me through to Winchester station. He asks me to spell it. After repeating it a few times at decreasing speed, he finally understands precisely which station I want to speak to.

“Sorry sir, we have a policy of not transferring anyone to speak with stations directly”.

Clearly sensing my exasperation, he says he’ll speak to them for me. Back on hold. Halfway through Clair de Lune, I’m cut off.

The station manager at Winchester looks at me with the expression I reserve for strangers who blow smoke into my face at bus stops.

“Yeah, sorry. It was really busy. There was no way I could get through all the people to grab your case”.

He’s clearly forgotten that we were just on that train… we know exactly how many people were on it: about half a dozen. He just couldn’t be bothered trying. Which would have been vaguely ok if he hadn’t said he would, when we radioed from Basingstoke before driving all the way here.

Part of me simply wishes he was a better liar, and had said he ran on but couldn’t spot it and wasn’t willing to hold up the train.

So, I give up and we continue north to Lincoln. An hour or so later I’m able to confirm that my case has arrived at the end of the line – Portsmouth. I arrange to pick it up from the left luggage factility at Waterloo later in the week.

It’s a great feeling when I’m finally reunited with it, as we’re off to Rome a few days later and I’d had visions of carrying my life in plastic bags.

Though when I open it up, I’m bemused to find that all the edible goodies have been removed from inside. Clearly my case was delivered by Santa!