Skip to content
Posted on May 19, 2012February 5, 2015 by Andrew
Apparently kids from Lincoln are quite nonplussed when they go to Paris and see Notre Dame, according to Emily and Chloe. After growing up next to this magnificent monstrosity, it’s not hard to see why.Even at midnight on a foggy night in spring, the lights of Lincoln Cathedral serve as a beacon for miles. Probably because unlike St Paul’s or York Minster (the only larger cathedrals in Britain) it’s perched high on a hill. We’ve been driving for about four hours since I left my suitcase on the train in Basingstoke, so the spires are a very welcome sight!

The street that leads from town to the cathedral is aptly named “Steep Street”. The next morning, after buying a few essentials to make up for the loss of my suitcase, we head up it. It’s hard not to enjoy walking up Steep Street… there’s a jolly mood that makes me wonder if it was JK Rowling’s inspiration for Hogsmeade. No wonder Steep Street has been named “Britain’s Great Street” winner 2012.

Emily convinces me to try an ostrich burger (which is delicious and tastes a lot like lamb), then we head towards Lincoln Castle to try and snatch a glimpse of the film crew working on the new series of Downton Abbey.

We’re out of luck, and return back towards the cathedral, which we explore briefly before a military service begins. It’s easy to spot the resemblance to Notre Dame. I’m intrigued to learn that Lincoln Cathedral also doubled for Westminster Abbey in the Da Vinci Code.

Near the Angel Choir, Emily draws my attention to a little imp that has been mischievously sculpted above a pillar. According to 14th Century legend, this imp was turned to stone by an angel, after being caught trying to destroy the cathedral. I love stories like that.

In the afternoon, we head down to a Young Farmers Rally. Though New Zealand kids have a reputation for being rough farm kids, this is a new experience for me.

It’s meant to be spring, but the wind is chilling us all to our bones. Luckily, I’m wearing about eight layers, thanks to resourceful Emily, who has nicked me warm things from just about every male relative!

Despite the arctic conditions, watching the tug-of-war is great fun.

After an Indian dinner, and some freshening up, we reattach our eight layers and head back to the rally – where we quickly assemble our tent before dark.

That’s right, you heard me. This fearless city slicker is going camping on a freezing weekend in the north. But first, it’s time to dance the night away.

The dancing is momentarily interrupted while I learn a valuable lesson: if a girl flicks something on to the ground from her hair and asks you what it is, and it’s a cockroach; lie!!

Unfortunately I cotton on too late and tell the truth, which predictably sparks half an hour of hysterical tears. I’ll chalk that one up to experience.

After the cockroach episode, I test my testosterone on the classic Young Farmers bucking bronco. 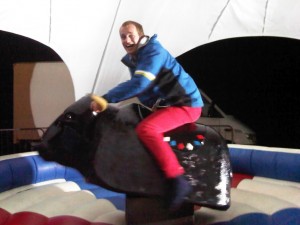 Emily, Chloe and I retire to our tent at around 1am. Wary of frostbite, I keep all eight layers of clothing on, adding a liberal amount of warm blankets too. We’d have slept snugly all night, were it not for the tent of marauding young farmers next door.

The next morning, after a shower and a quick nap at Emily’s mum’s house, I’m treated to Sunday roast in the 350 year old farmhouse she grew up in. This was the highlight of the weekend: like many antipodeans, I can scarcely wrap my head around the idea of so many generations existing within a single building.

Shortly after lunch, we return to the car for the long drive back to London.

It passes quickly – a sign of good company, I guess.