The fog was so dense that – though I was assured I was standing right in front of the Taj Mahal – the invisible backdrop to my selfie could just has easily have been a bronze bust of Elton John.

As my guide led me around, I tried to remember what it looked like from pictures I’d seen. I squinted a little bit and tried to guess how big it would be.

The sun had been up for nearly five hours. I started to feel like my Sunrise+Sunset Taj Package may have been an inside joke, and I imagined all the guides standing around in fits of laughter regaling hysterical stories of the tourists who were too dumb to know that the Taj was about as visible at sunrise as it was at midnight during a powercut.

We gave up and left.

Thankfully, a few hours later we got the call that the fog had lifted. My mood was immediately elevated somewhere between joyous and ecstatic.

Here, I present for your amusement a series of interactive images: drag the sliders to compare my photos taken from exactly the same vantage point just two hours apart… 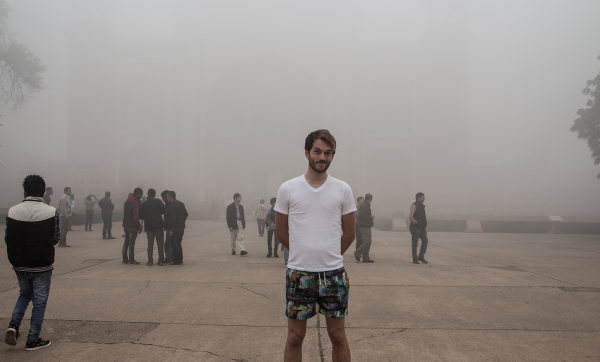 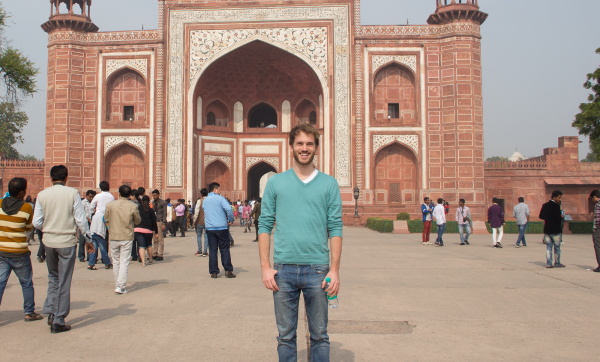 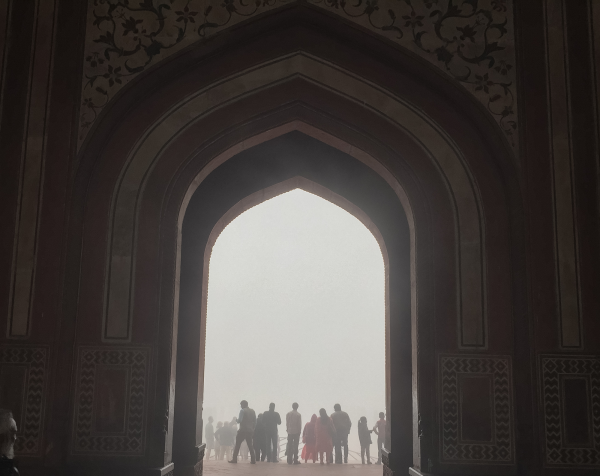 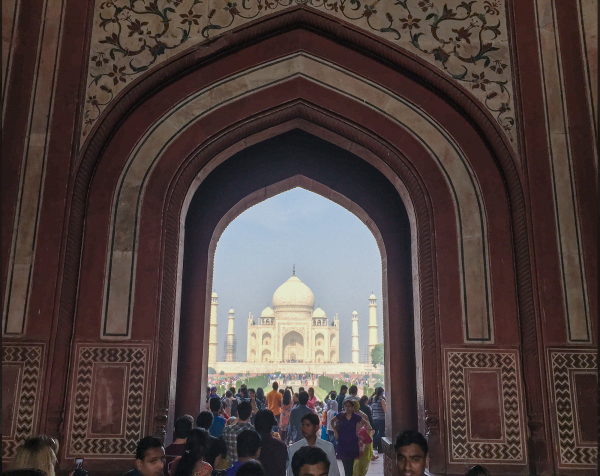 It turned out to be a lot bigger than I’d imagined. 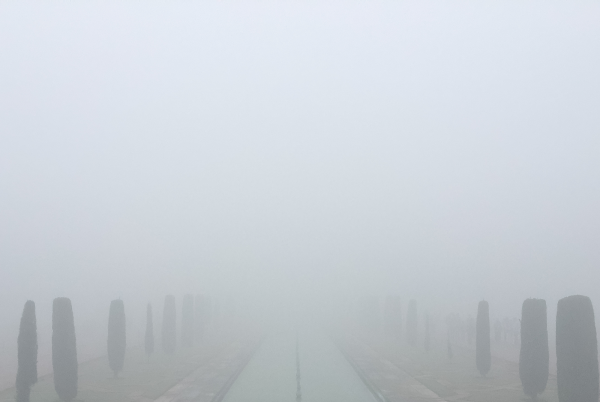 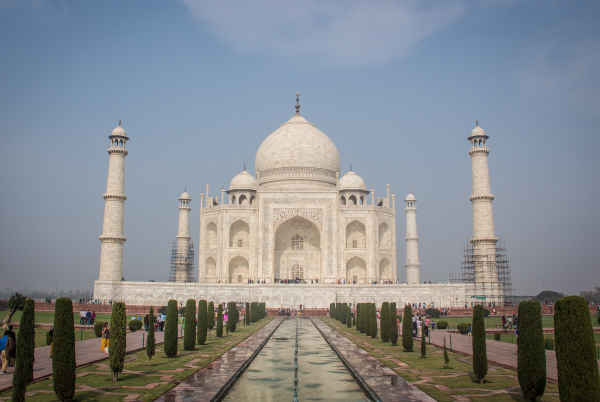 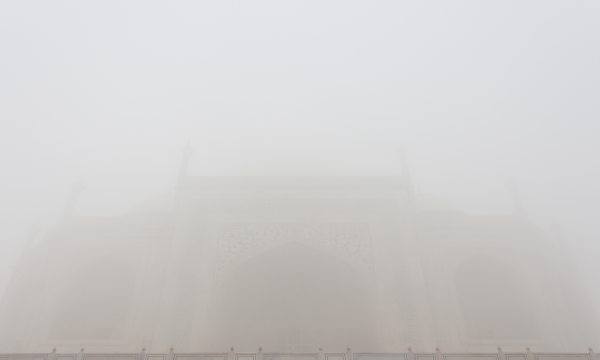 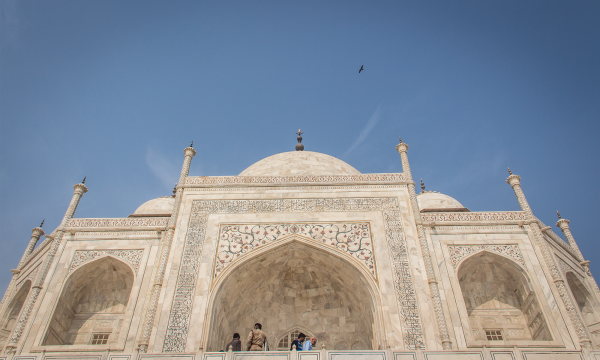 Even standing right next to it, I was completely unable to see the dome. 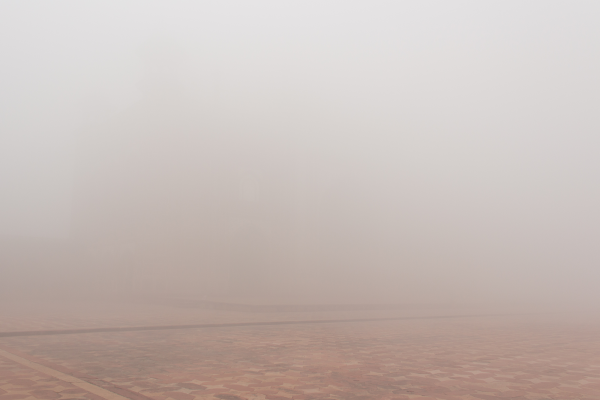 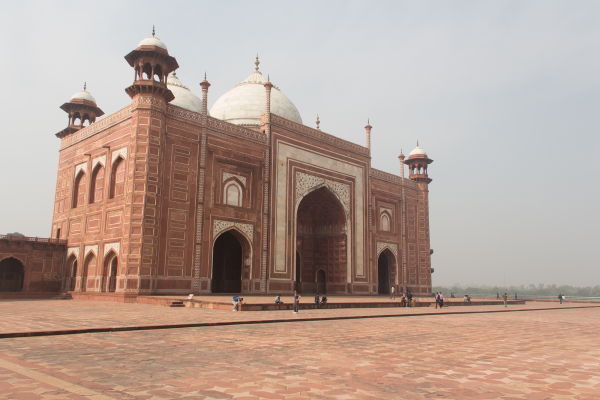 Beside the famous domed mausoleum are two red mosques. One is functional, the other is purely ornamental – to preserve the symmetry!

Ok, that’s the last of my interactive photos, but here’s some interesting trivia: the monkeys were nowhere to be seen after the fog lifted. 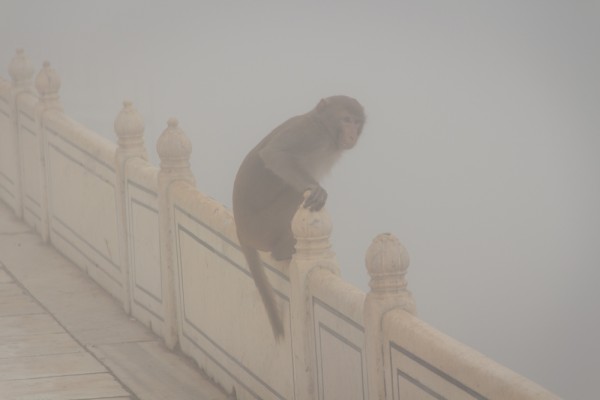 Some of the time we killed was spent drinking homemade chai tea from a clay pot at a roadside stall my guide swore was the best in India. We smashed the pots against a wall when we were done.

And then we waited. 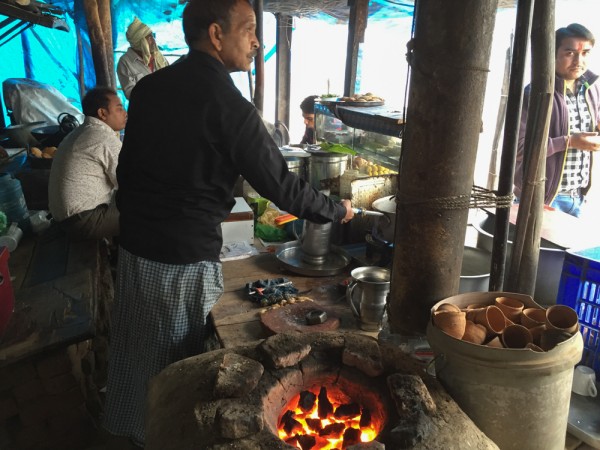 I can barely articulate how surreal it was to experience this enormous architectural marvel for the first time on my second visit. 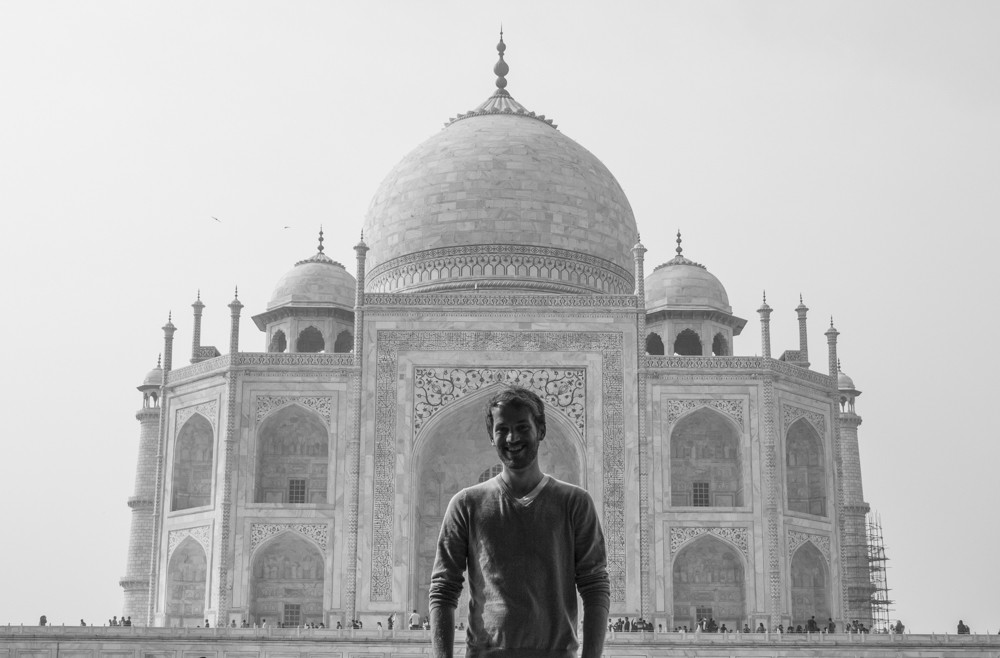 I wanted to soak in every detail, in case it disappeared again. 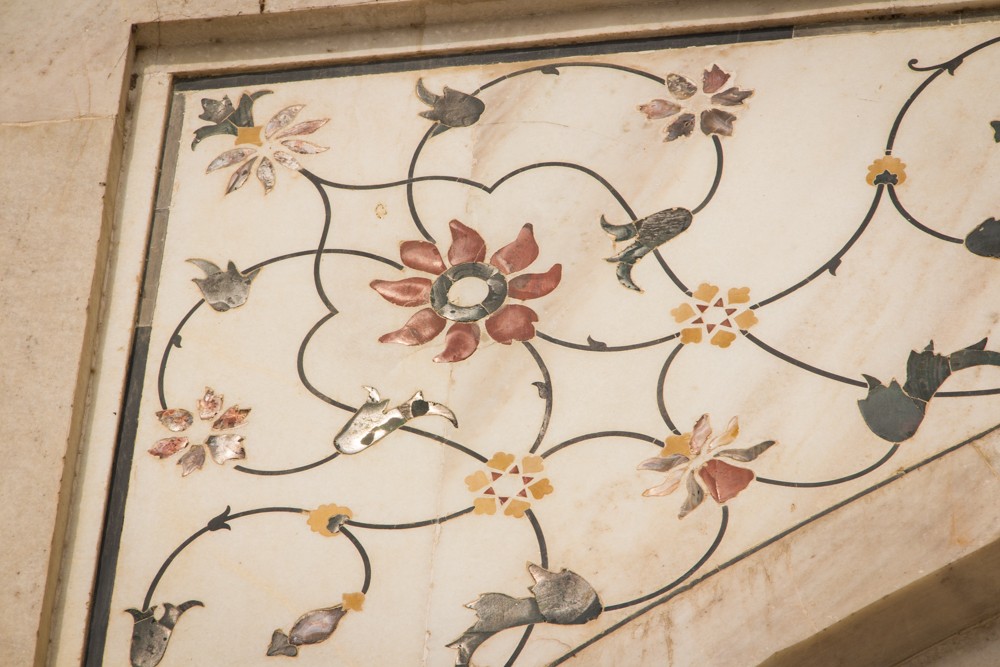 The first time I saw a photo of the Taj Mahal, I remember thinking that it looked delicate like lace. I now realise that the darkness I perceived as ‘holes’ or shadows was actually the encrusted semi-precious stones. 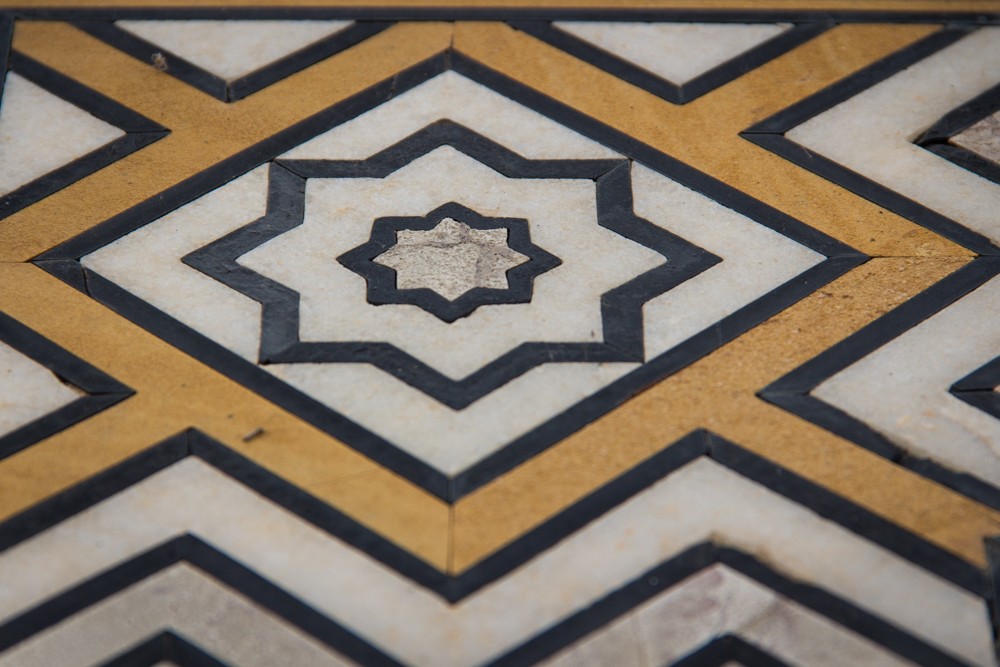 The jewels encrusted within the marble were ornate, exquisite, and endless. No wonder it took over twenty years to build by hand. 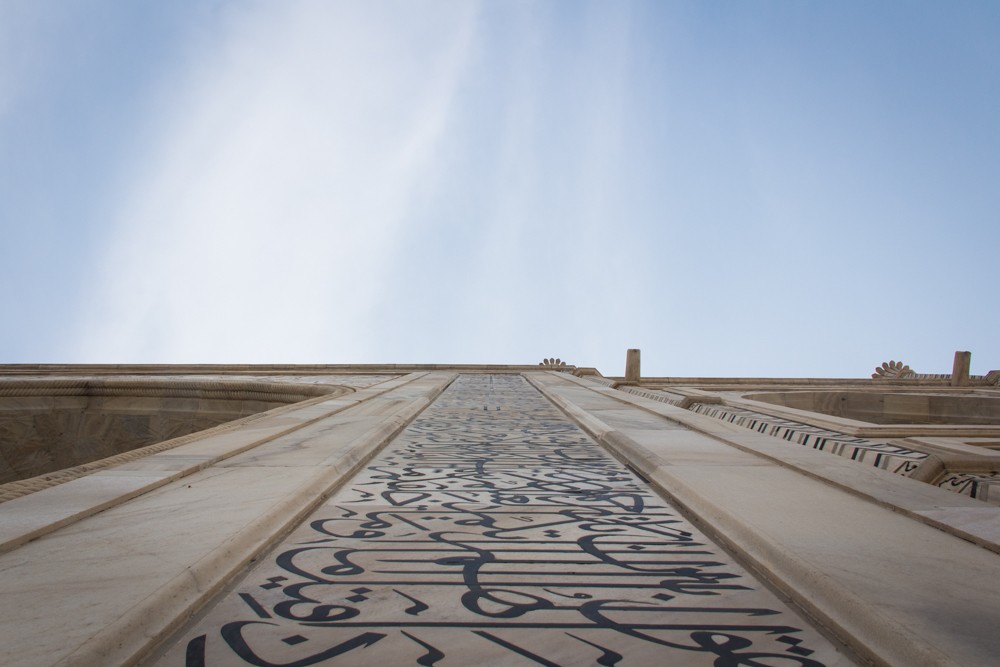 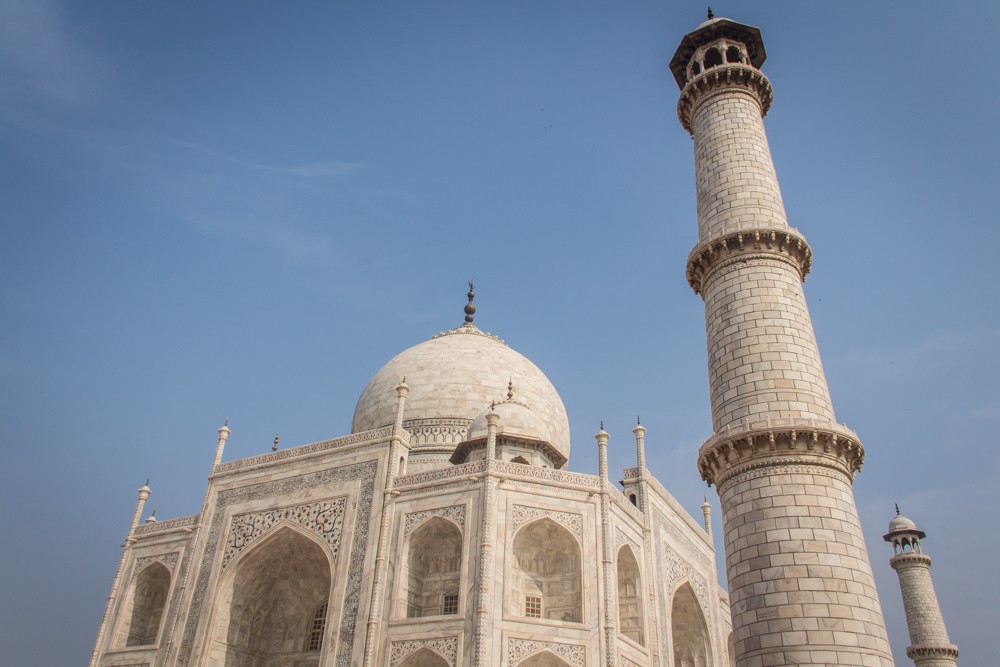 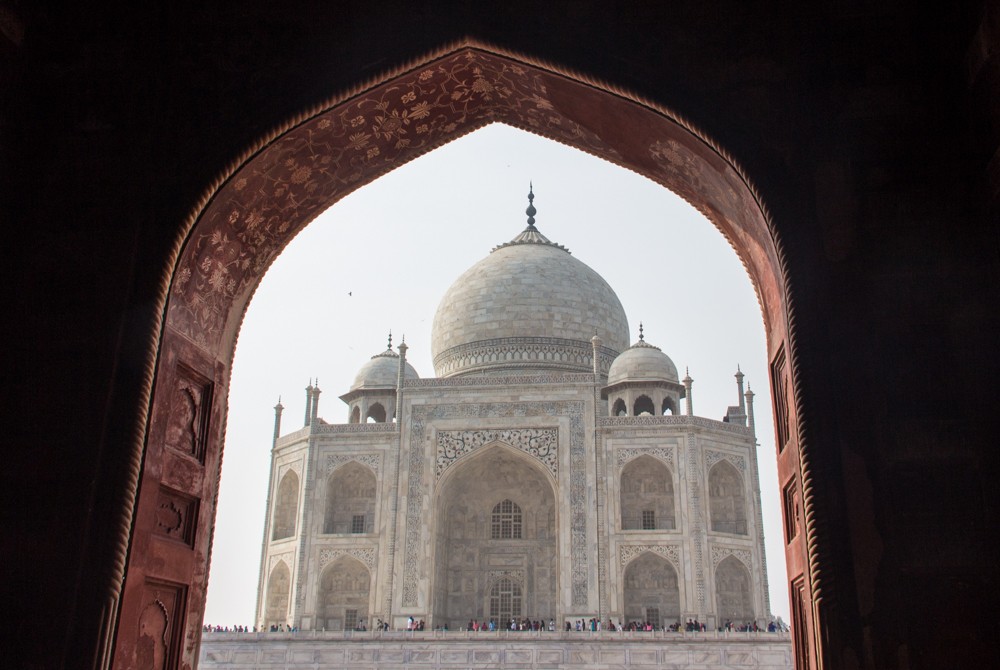 For a change in perspective, I asked my guide to take me to Mehtab Bagh, the famed gardens across the river.

As the thick haze began to descend once more, the sky was infused with a saffron hue I’d only seen in photos.

It was probably smog, but it was beautiful. 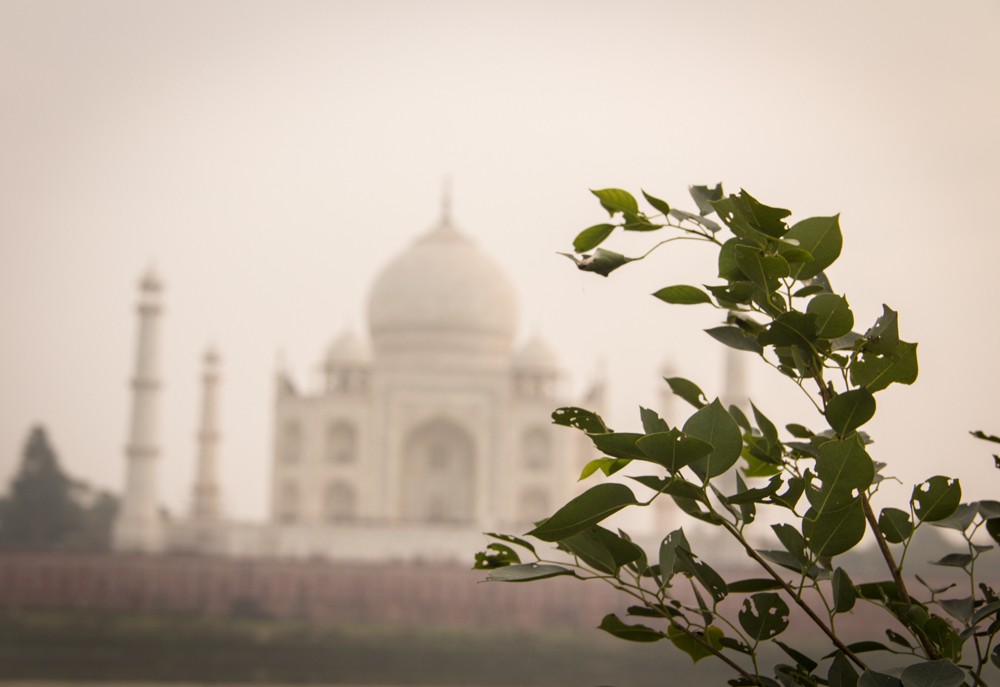 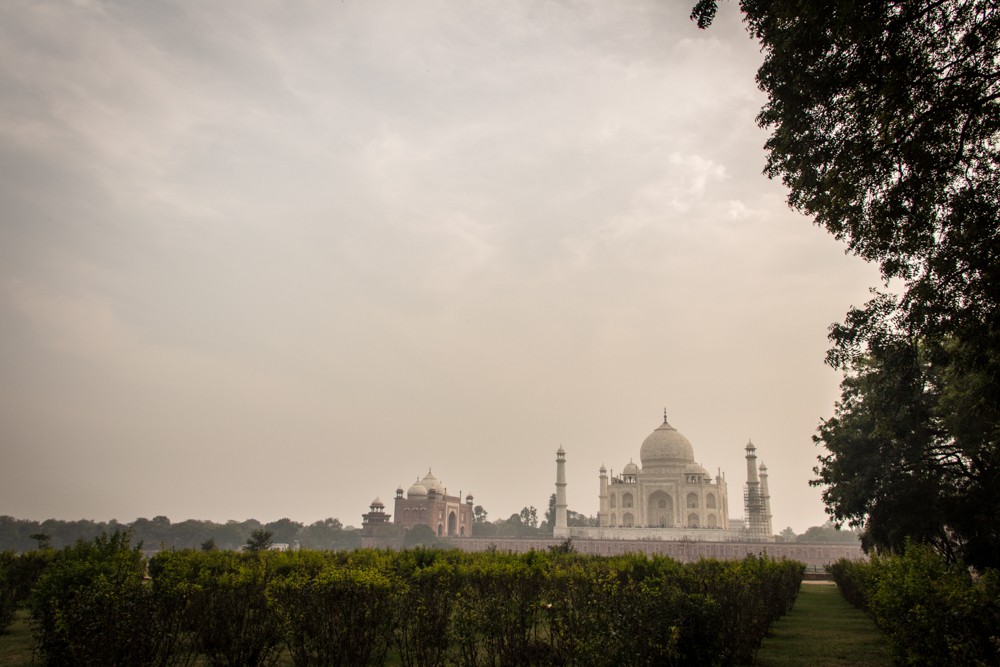 I was hoping to see locals washing their clothing in the river, but my guide informed me that this practice was halted decades ago because the local authorities felt it undermined the proud image of the Taj. 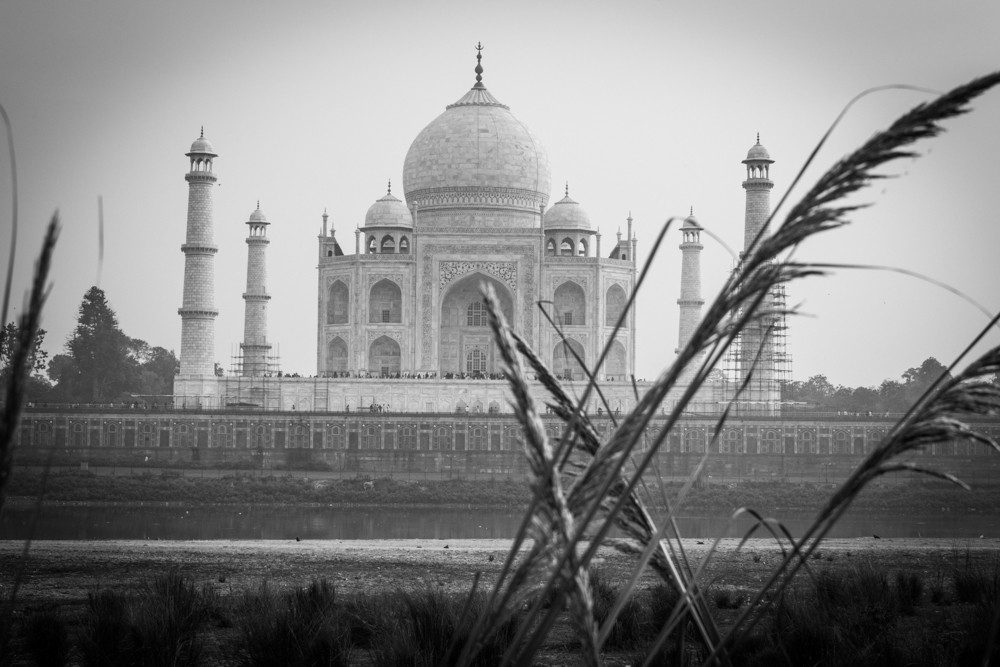 The last image I took in Agra is a haunting one. A reminder that the majesty of the marble Taj is a carefully curated part of India’s public image.

Indian citizens can see the Taj Mahal at a fraction of the tourist price, but few will have the means.

I thought of Laxmi, my guide the day before in the Delhi slums. After she enquired about the rest of my itinerary she exclaimed “I’d love to see the Taj one day!”

She lived two hours away. And she was wealthy compared to the others I met in that area.

Travel is a privilege and I hope never to forget that. 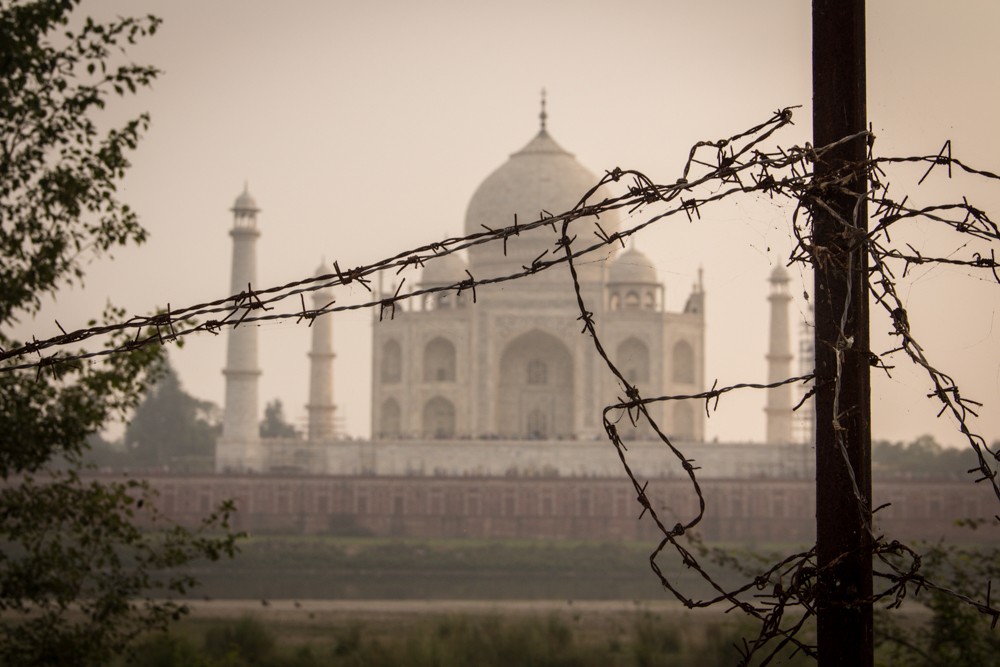 Within half an hour, the fog had returned, and this view would have vanished. By then, I was safely en route back to Delhi to begin my arduous return voyage home.

PS this isn’t the first time I’ve had disastrous white-out at a wonder of the world. Read my Grand Canyon debacle here. (Word of warning: it’s one of my earliest posts and “I’ve come a long way!” is the optimistic way to spin its mediocity).