This is the photo that tourists are supposed to take of four hundred year-old Jama Masjid mosque in Delhi. 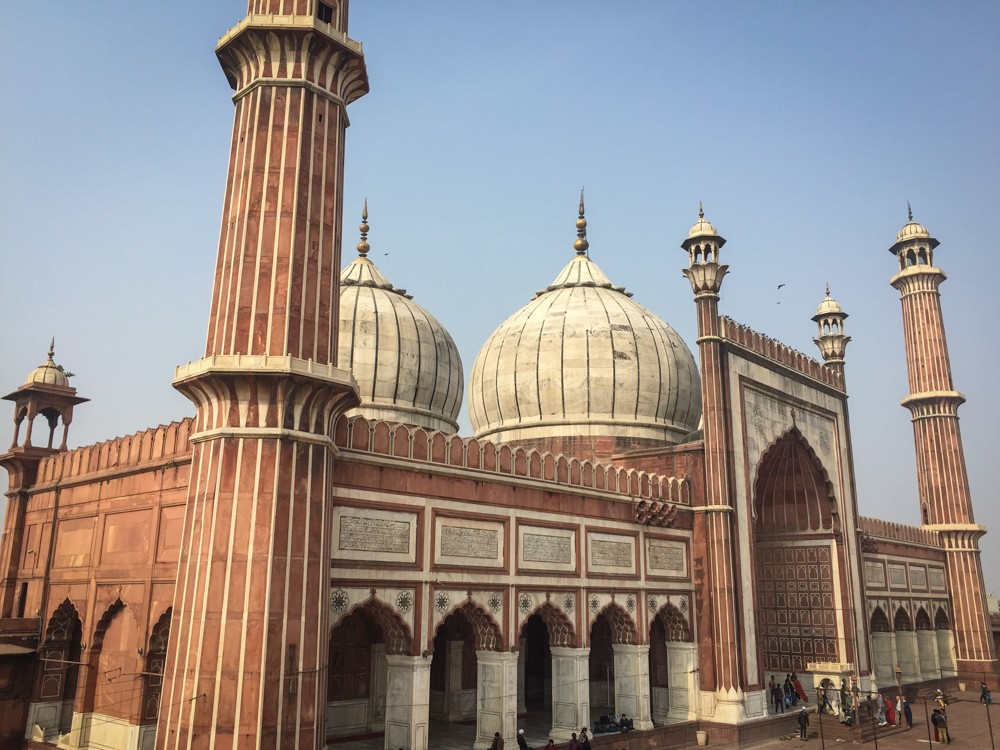 The more adventurous tourists will remove their shoes, rent a robe, and figure out how to climb one of the minarets.

They’ll be rewarded with this photo. 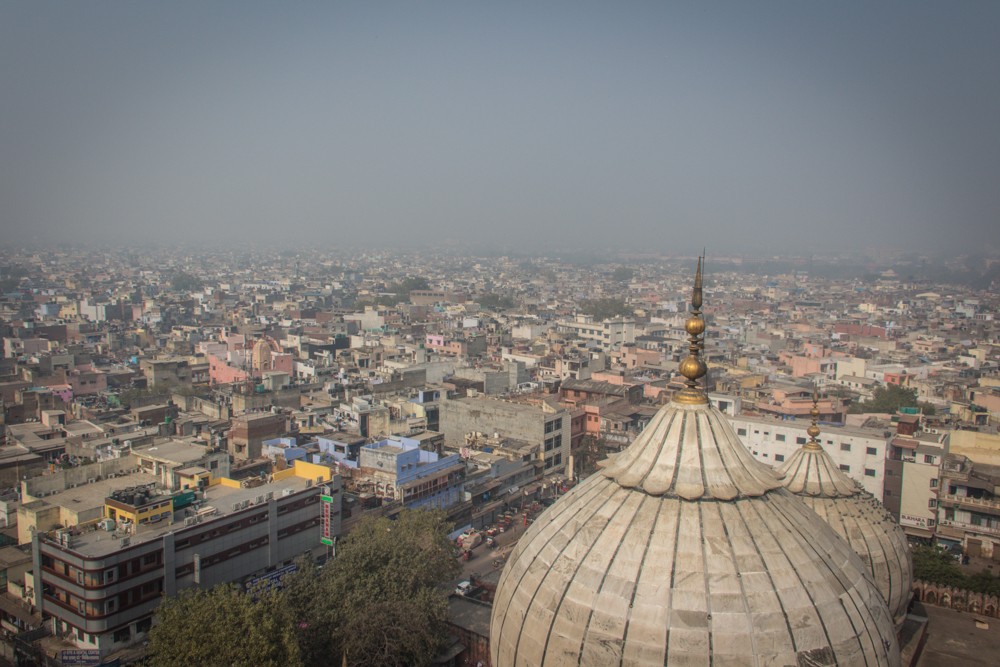 And they’ll see the city of Delhi billowing out in every direction, under a thick layer of smog that blurs the horizon.

But they won’t really see Delhi. The real Delhi is at street level.

When I decided to walk to the mosque from my accommodation, everyone told me to turn back.

“That’s straight through the slums”, the guy at my hotel reception warned. Rickshaw drivers heckled me, telling me that tourists don’t go through that area. That it’s not safe. That the mosque was closed and I should go shopping instead.

But if I’d been too fearful to walk through the streets, I’d never have seen a monkey steal a banana from a cart; just like in Aladdin. 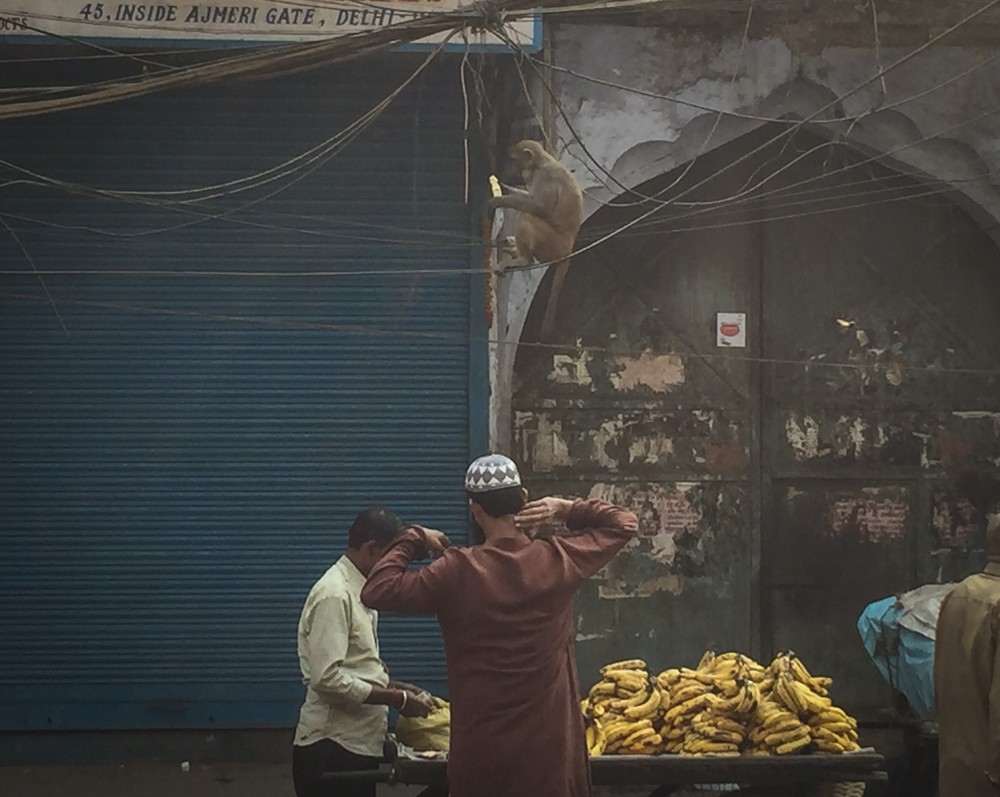 And the best photo I got of Jama Masjid mosque was after I’d left. It was the perspective from a random street on the fringe of the slums, that I’d have missed if I wasn’t walking. 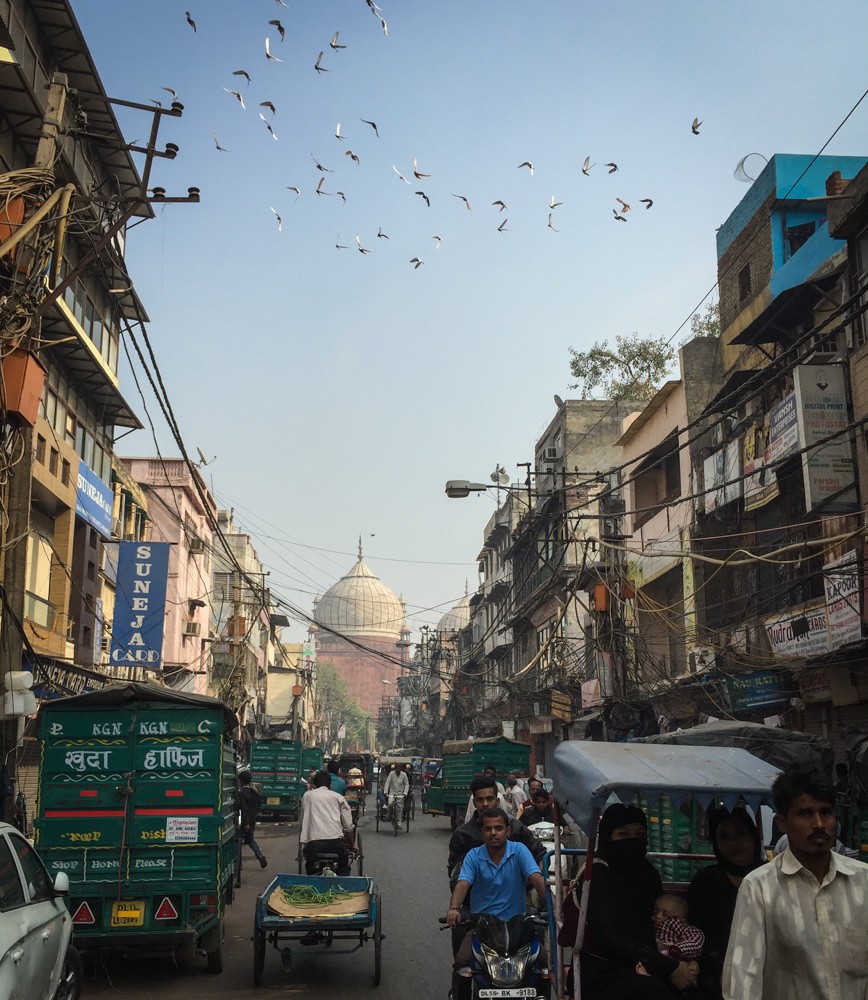 An hour later, I was being led deeper into one of Delhi’s largest slums. 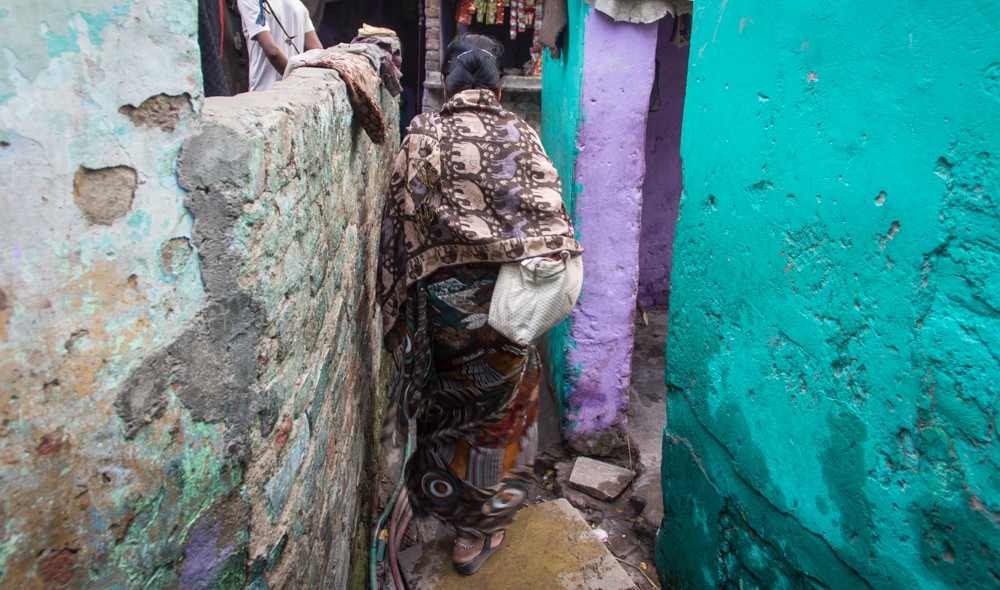 I’d met up with a guide, Laxmi, who works for PETE (Providing Education To Everyone), a Delhi charity that provides education to children living in the slums. One of the ways they raise money is by giving people like me a chance to experience what life is really like for people who live there, in exchange for a donation. 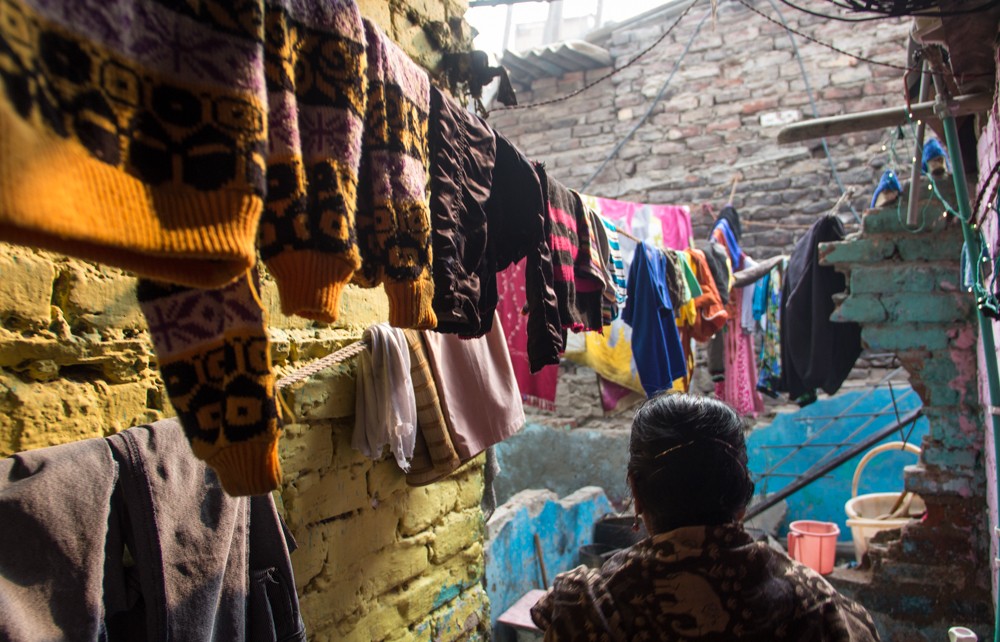 This kind of experience is controversial. Some dub it “poverty tourism” and consider it to be patronizing or even reckless.

I understood that perspective, but felt it was somehow worse to leave India without ever being prepared to meet real people and maybe get my hands dirty. I decided to see for myself. 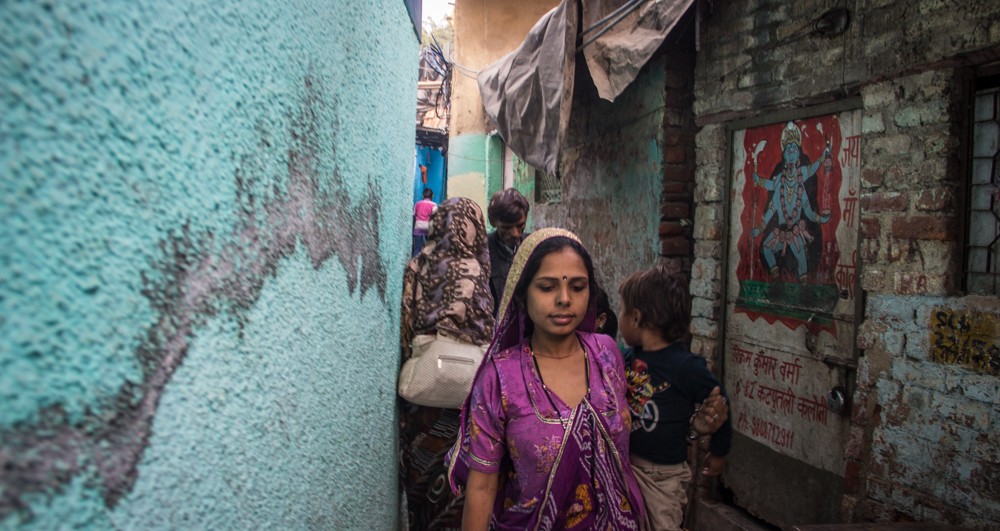 I chose not to take photos of rubbish or squalor. I focused on finding the joy and colour.

And that wasn’t difficult at all. 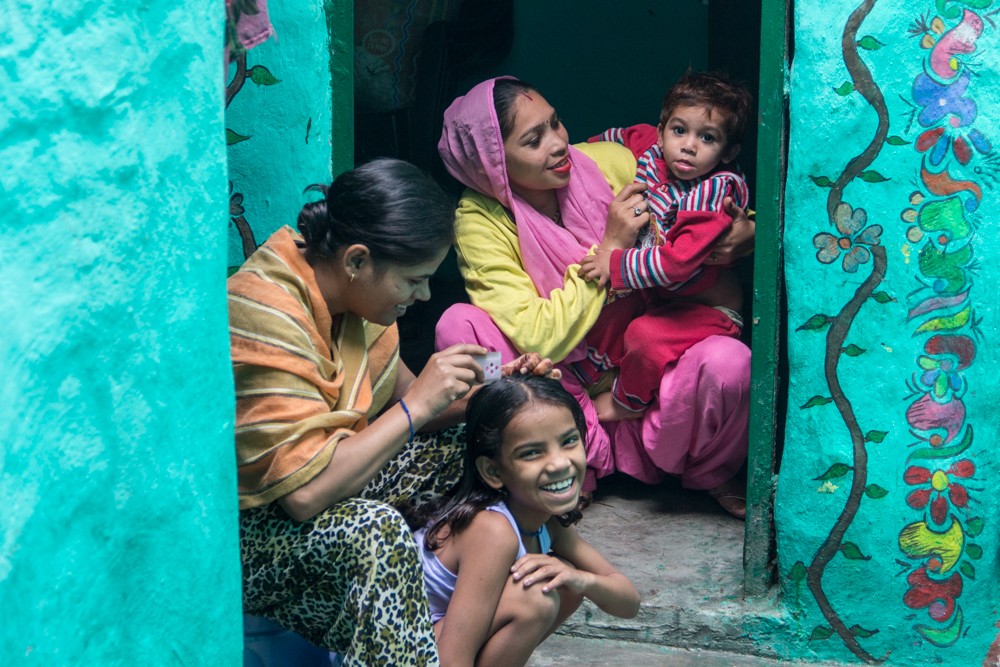 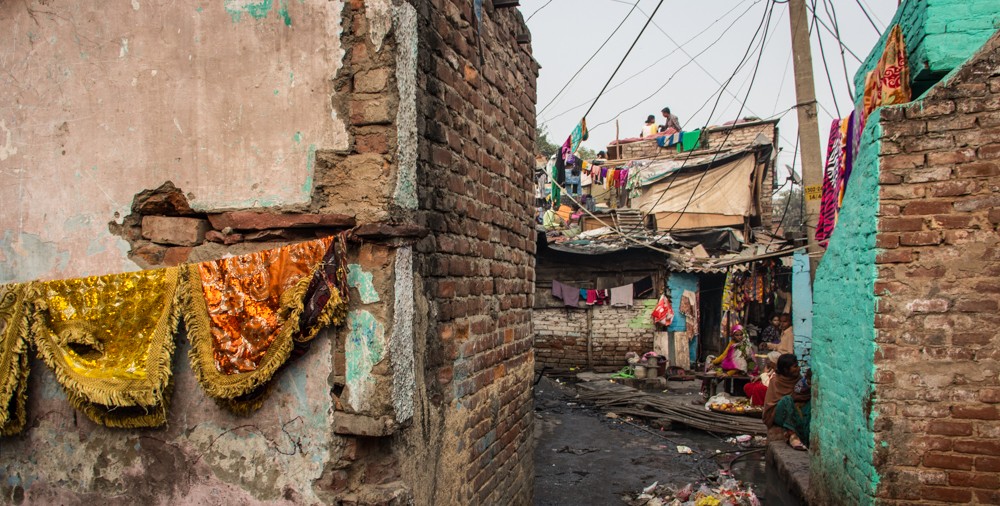 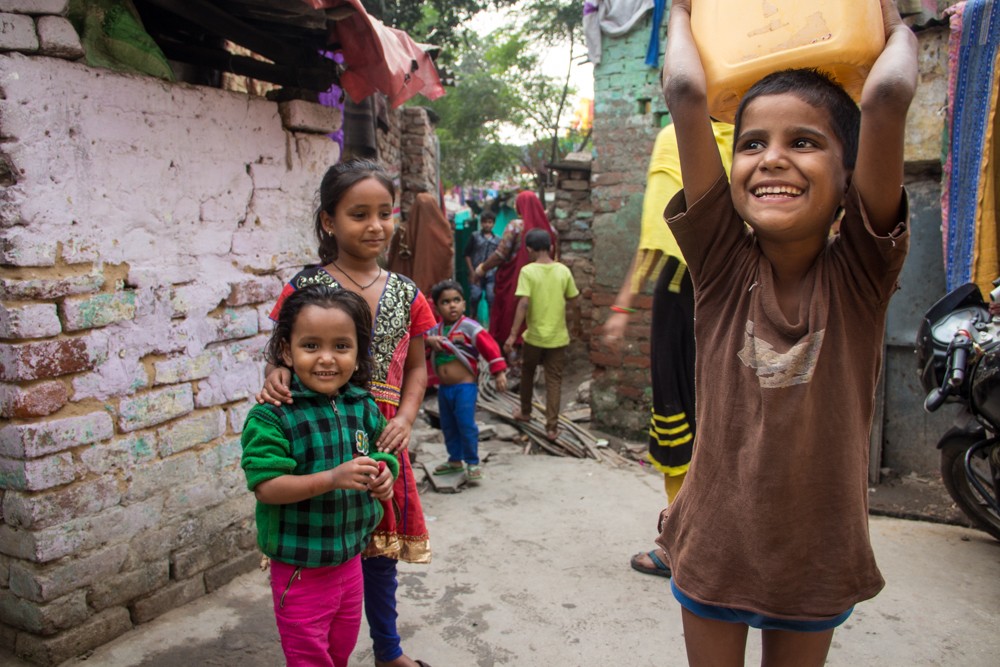 I was surrounded by the happiest kids I’d ever seen. And they adored posing for the camera.

They would bound up to me exclaiming “one photo? one photo?”

And then, they would beg me to show them what they look like, using a hindi phrase that Laxmi had to explain to me. 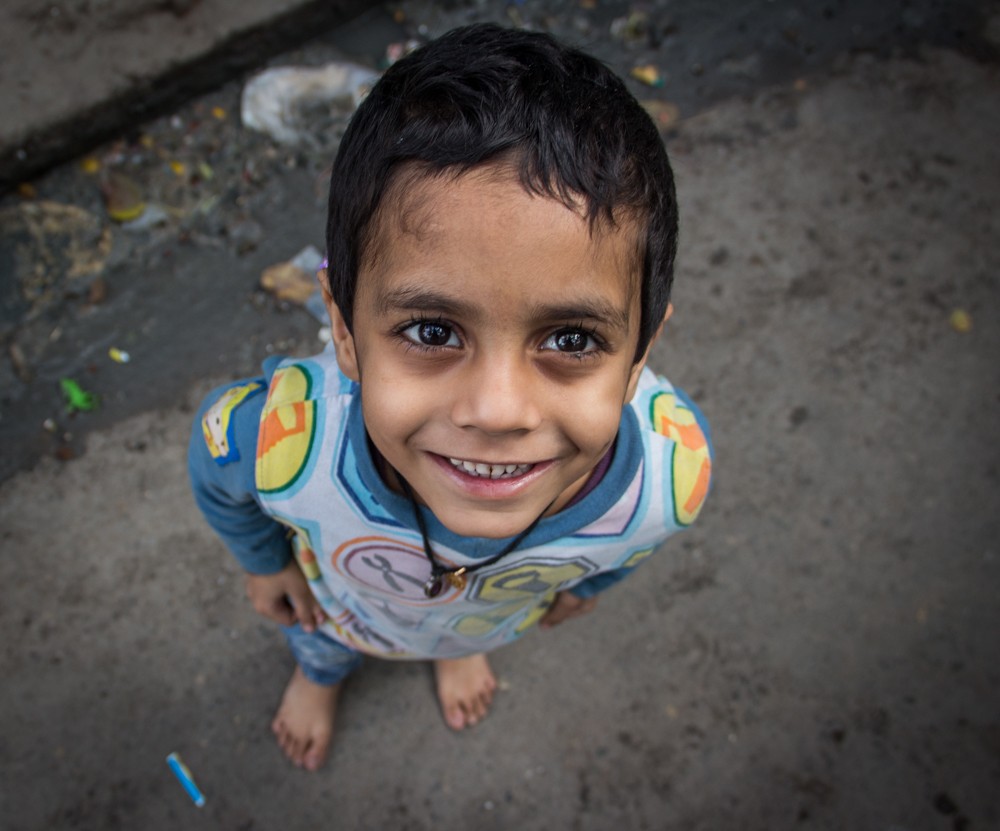 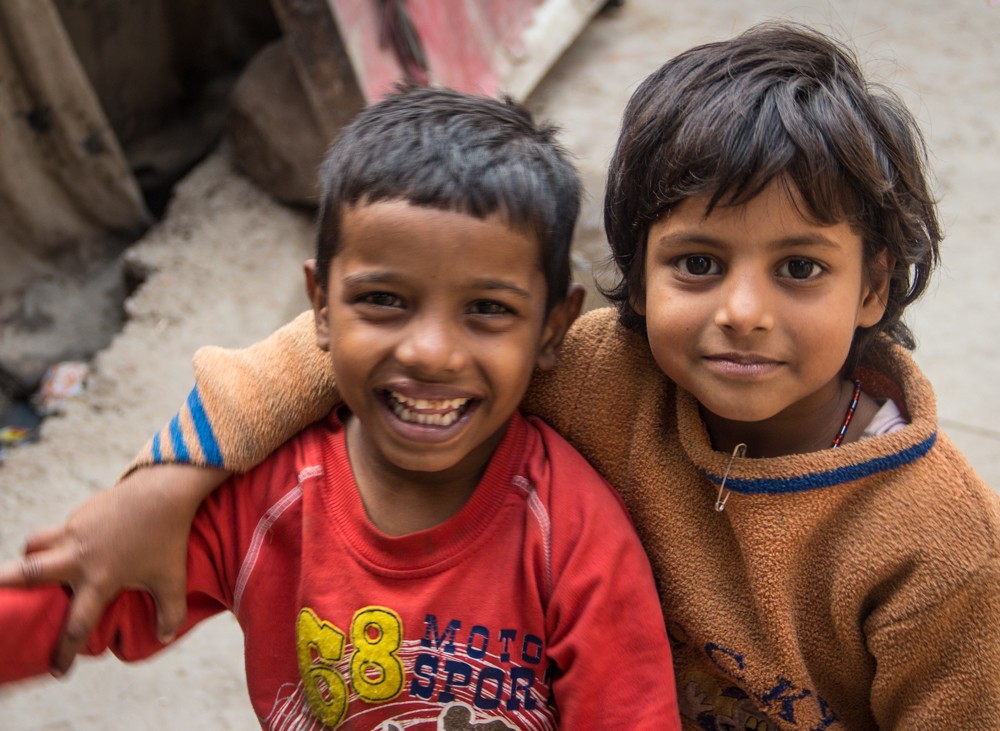 One adorable little shy kid was cooling off in a blue bucket and hid when he saw me. 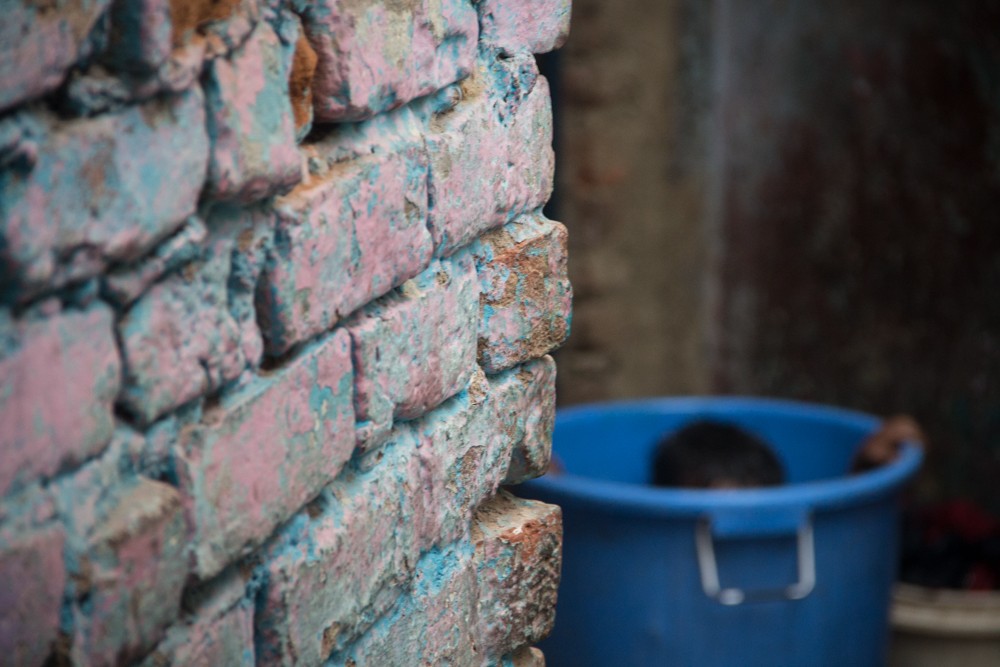 But eventually he worked up the courage to say hello again. 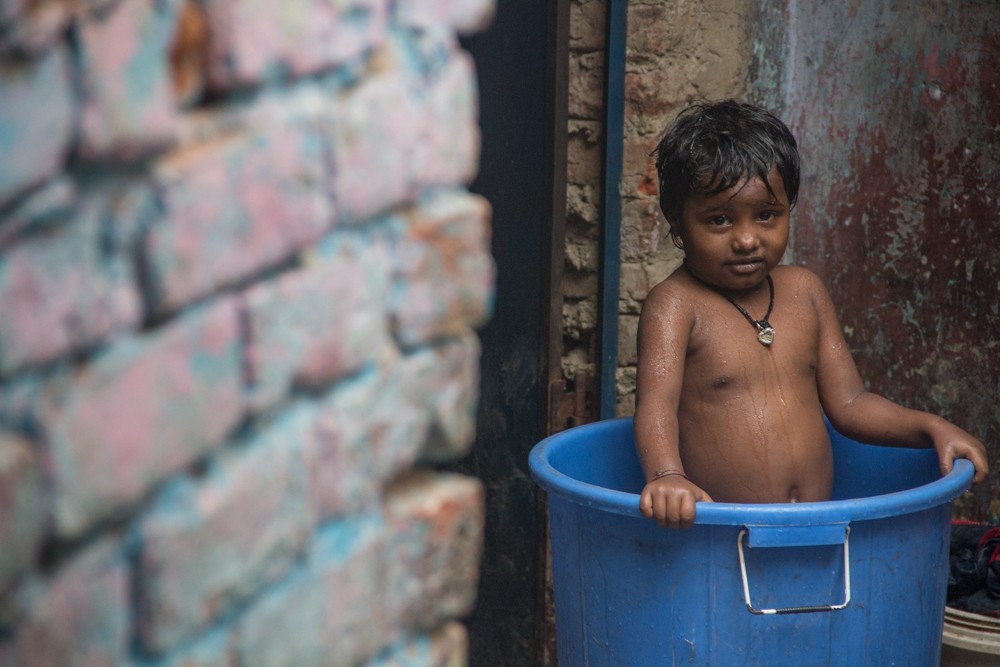 As we walked through each area of the slum, Laxmi would tell me about the families that lived there. Some were Rajasthani, some were Artists, some were Muslim, Street Cleaners, Gujarati, Christian, Magicians, Hindu, Seamstresses…

I was fascinated by the way that origin, occupation, class, and religion blurred at the edges, with all families in an area classifiable by one method or another. 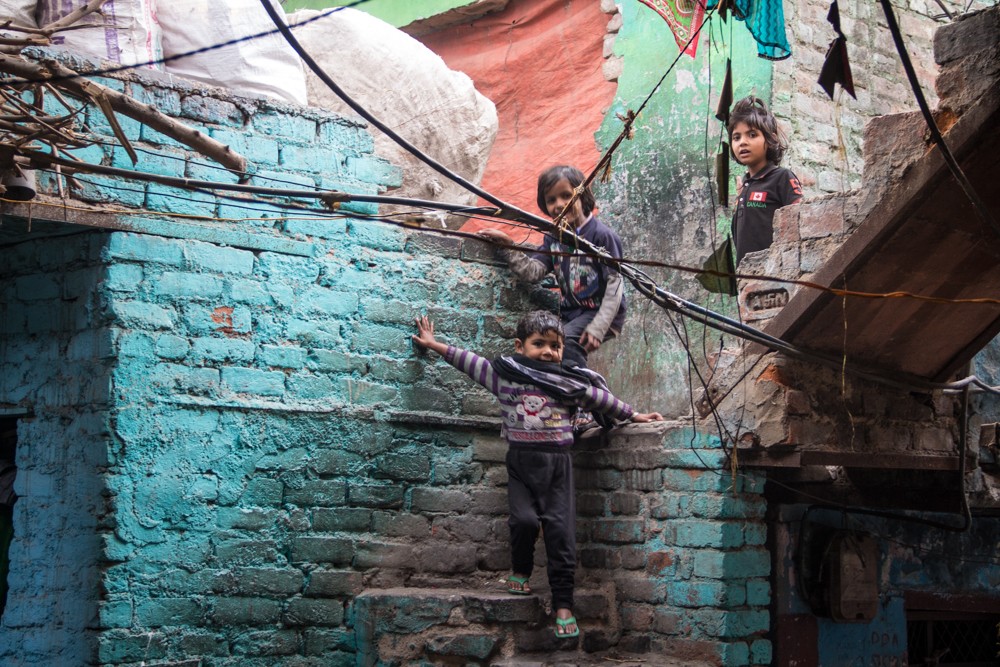 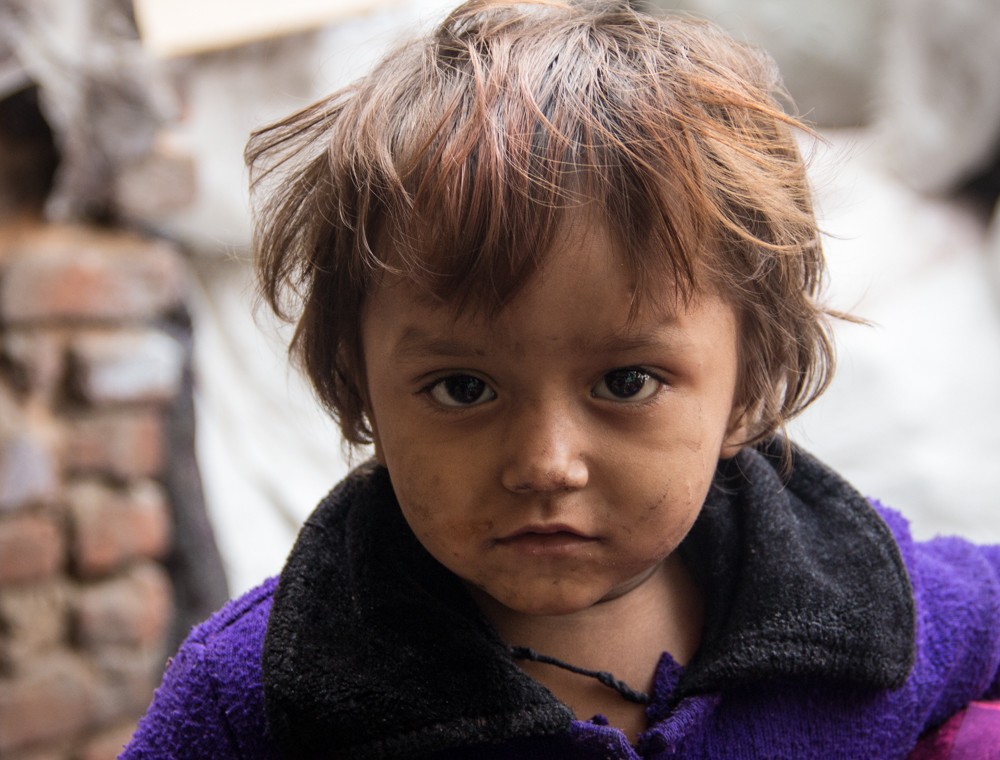 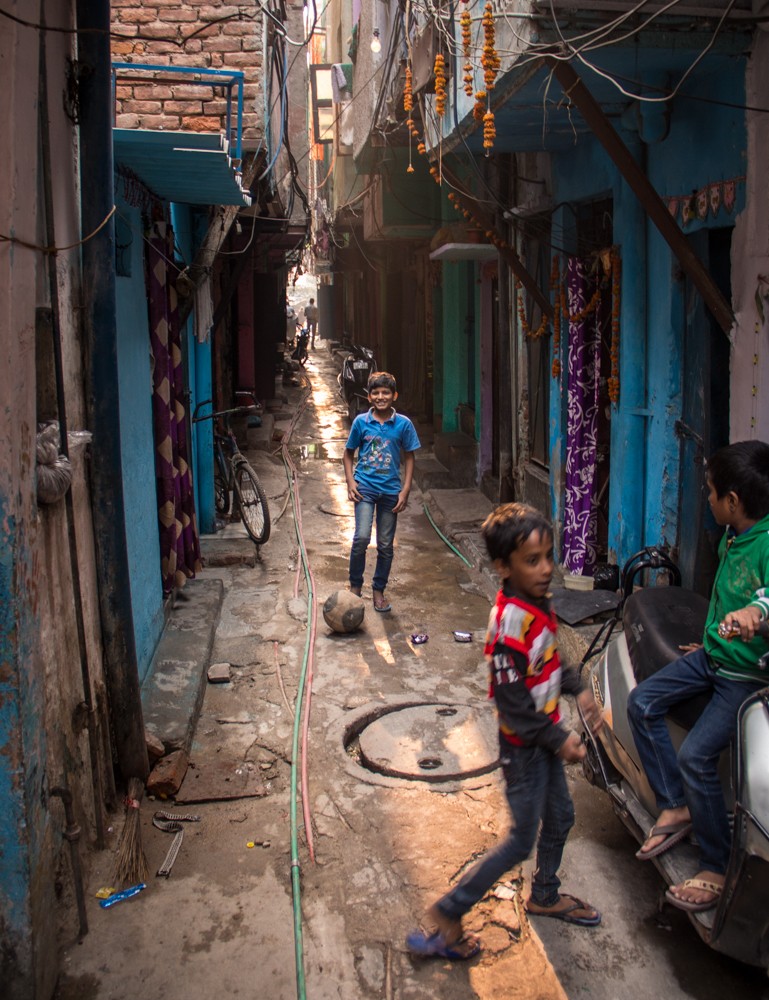 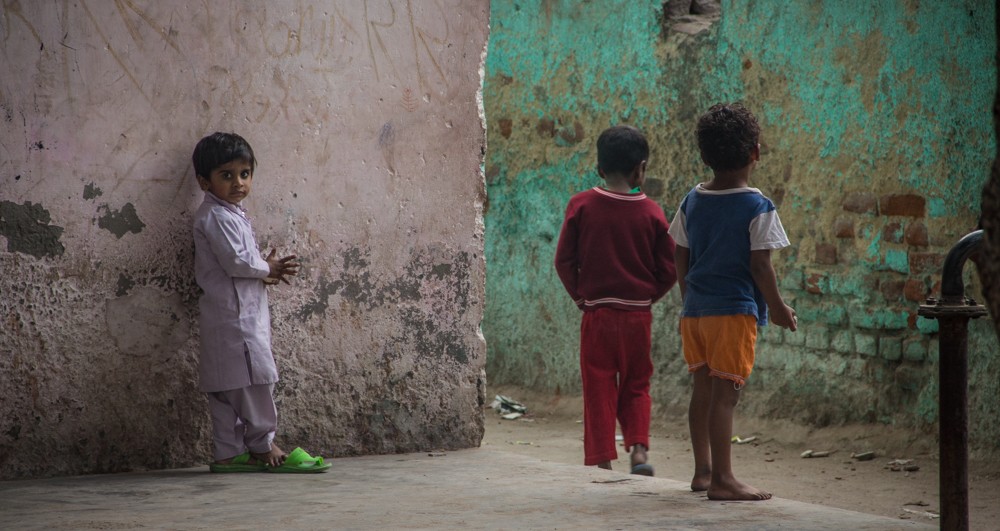 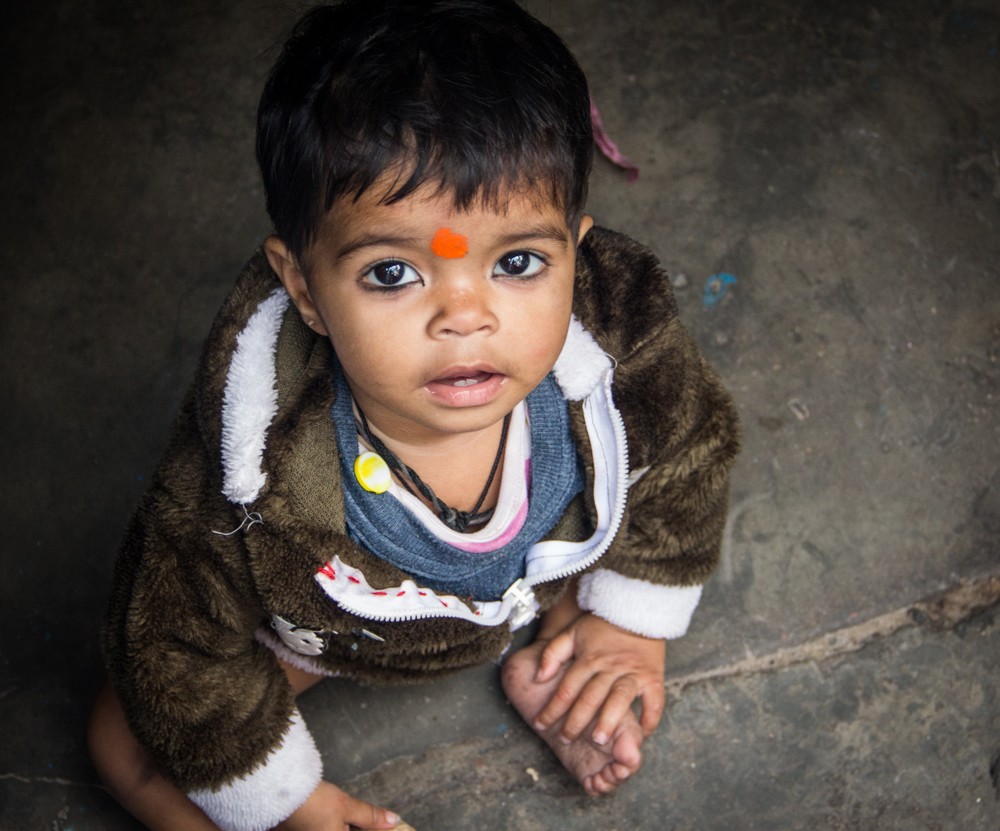 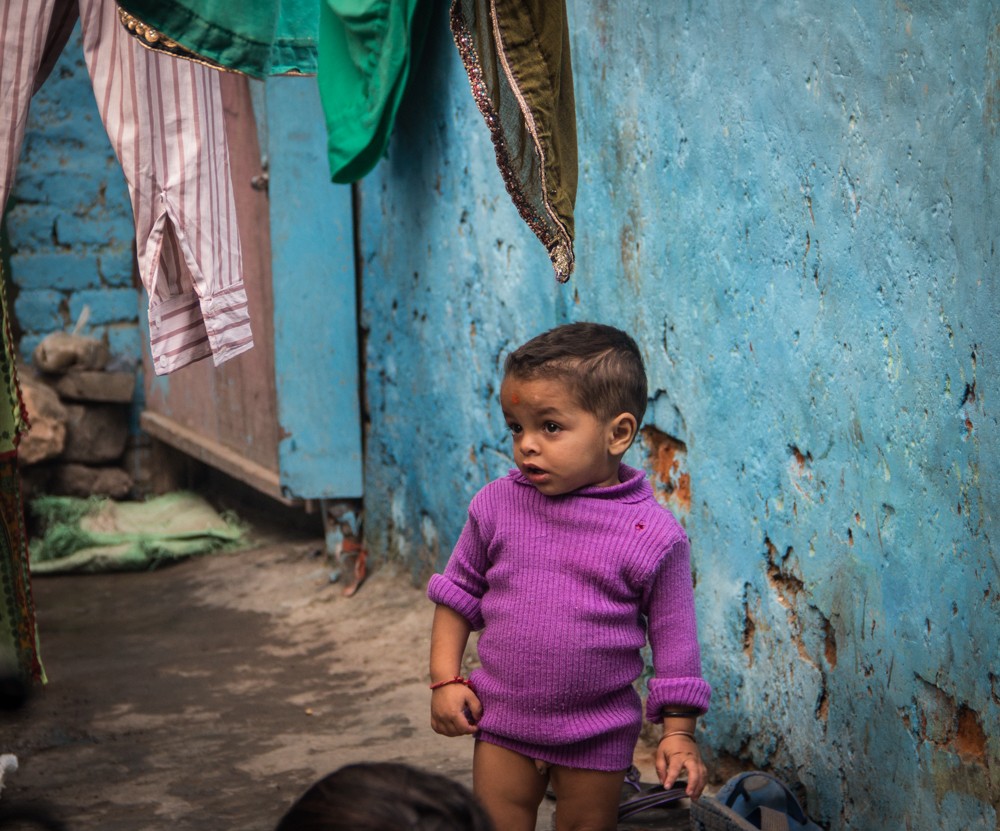 I was able to see two of the schools that PETE runs. One teaches young kids to read and write, the other teaches older kids a craft. 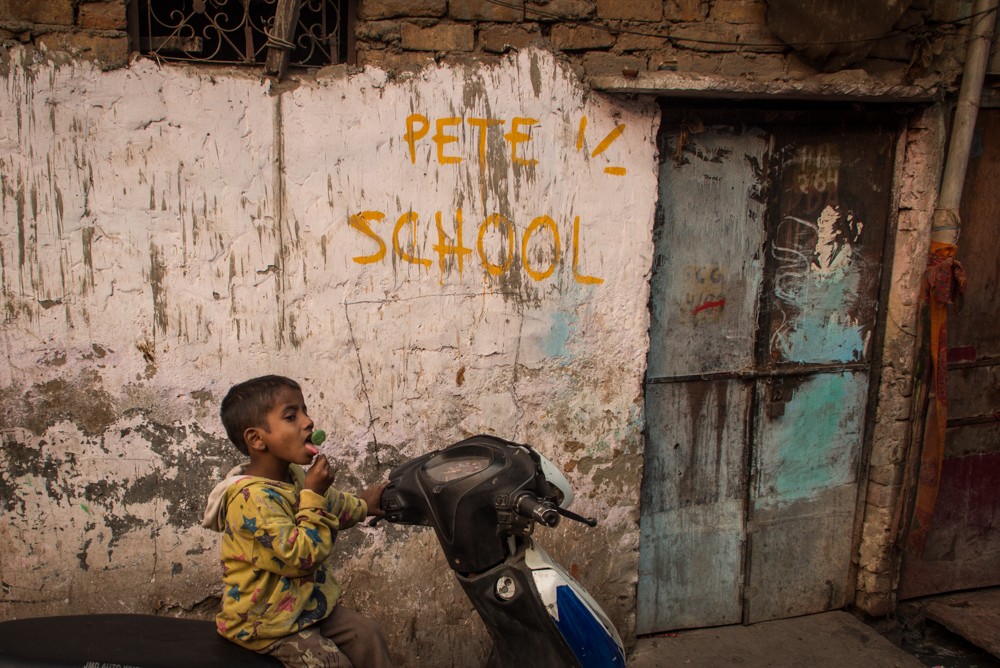 Because it was Sunday, kids weren’t in school. But I got to meet a family that runs one of the schools.

This kid is 16 years old and taught me how to play traditional Indian drums. He’s a wizard. I could barely mimic his easiest beat. 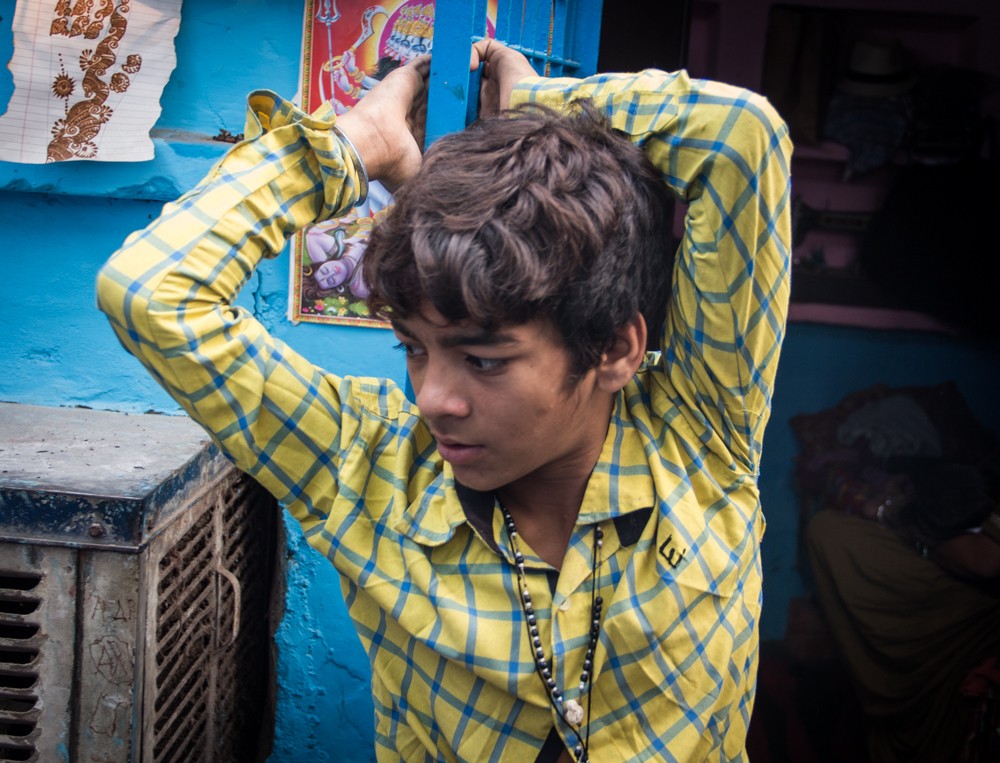 He asked me to sing a song from my country, so I sung a Maori folk song and he drummed to it while his mother made us chai tea. 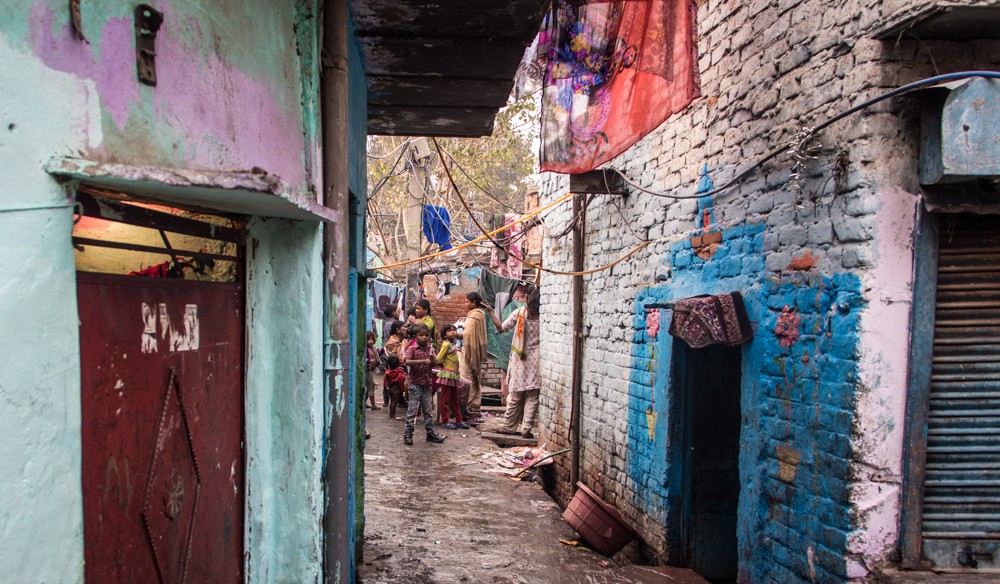 I’ve been blessed with some incredibly memorable afternoons in my life. In fact, the very next day, I saw a wonder of the world. But the two hours I spent as an observer of another world in the slums of Delhi were among the most life-changing (and life-affirming) I’ve ever experienced. 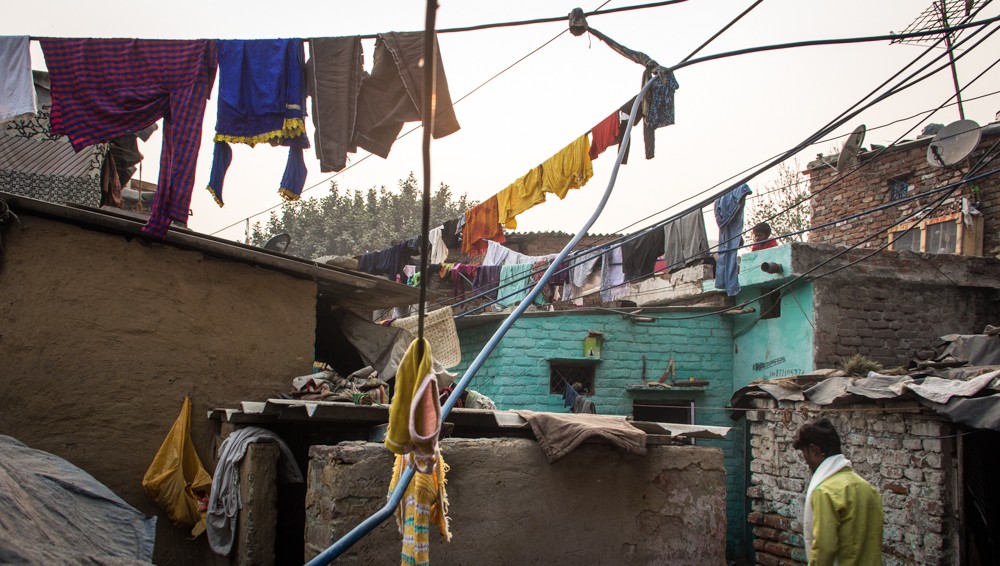 People living in poverty around the world are often marginalised as a problem to be dealt with. As illiterate, unsalvageable, or worse, dangerous.

Which just couldn’t be further from the truth. (Here, at least). 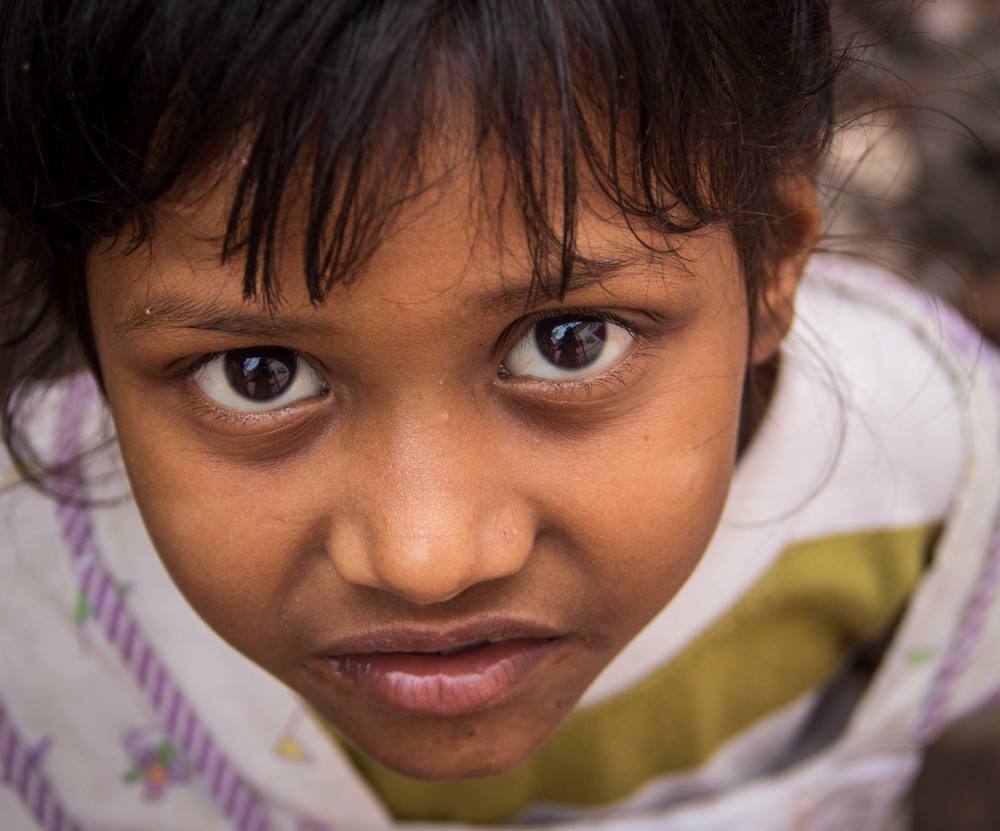 When we silence people, we fail to learn from them.

I know there are so many things I could learn.

I could learn a lot about budgeting from a parent who can only work for six months of the year.

I could learn a lot about privilege from a grandmother who has never left the area she was born in.

I could learn a lot about community from a group of families that operate an entire infrastructure with barely any state support.

I could learn a lot about gratefulness from a son who is required to take on the trade of his father, regardless of his aptitude or enjoyment.

I could learn a lot about resourcefulness from a mother who has to feed four children on less than what I spend on a single subway ride.

And I could definitely learn a lot about joy. 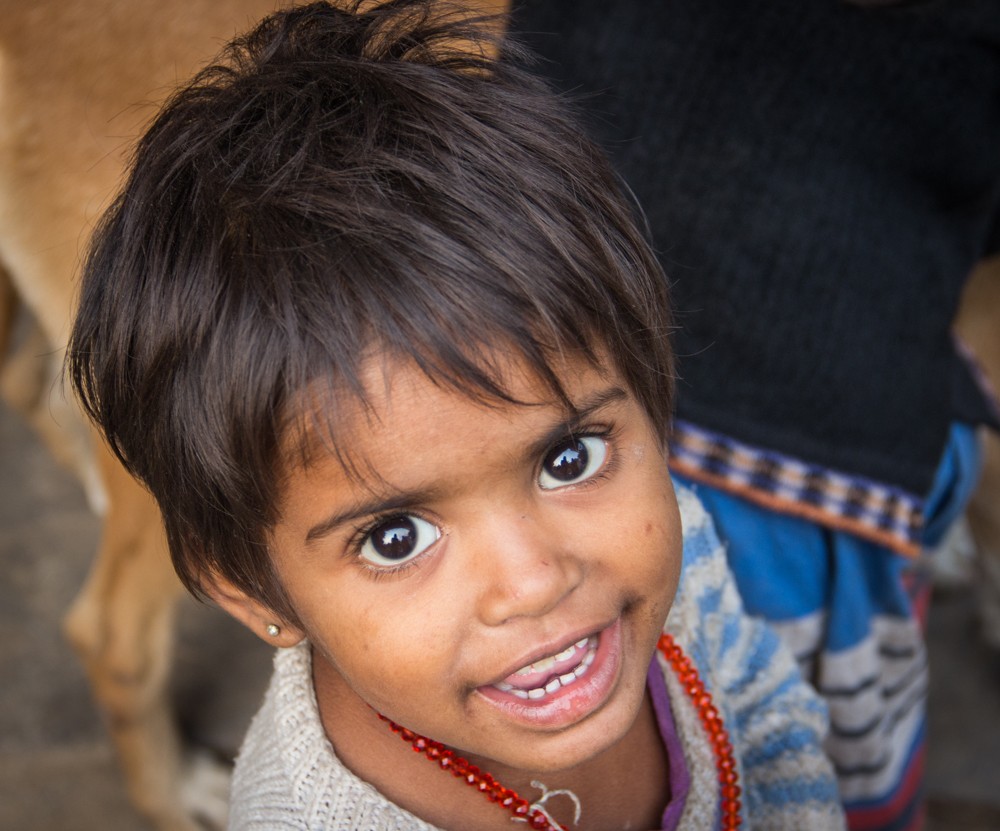 I got to leave the slums after just a few hours. The privilege of being an outsider.

I am glad that I didn’t leave India without looking beneath the surface. And I’m glad that 80% of what I paid PETE for my experience goes directly towards the education of the children that I met.

If only more people would do it. 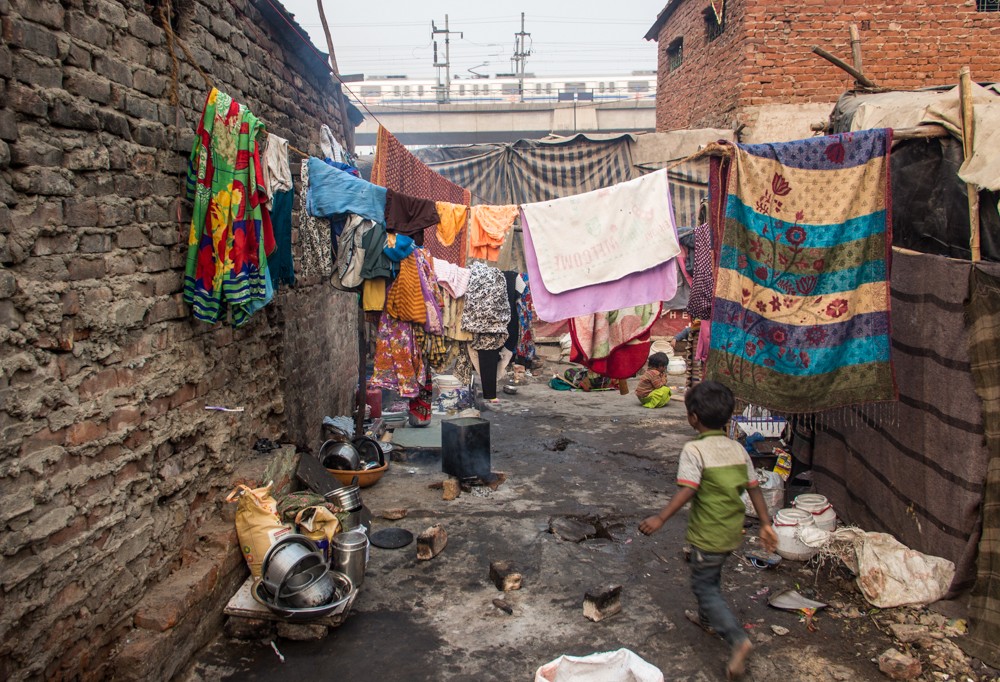 I wanted to round off my post with a call to donate to the work that PETE is doing in the Delhi slums. It’s particularly relevant right now, as I’m publishing this two days before Christmas. But they don’t have a facility to accept international donations online, so I will instead link to a very similar (and reputable) organisation called Salaam Baalak Trust. Donate here to make a difference for these kids.

And if you’re ever in Delhi, here’s the link to PETE’s website where you can book this walk.

2 thoughts on “The Real Delhi”