Skip to content
Posted on March 20, 2011February 5, 2015 by Andrew
To say we slept badly in our car parked outside the Wickenburg Inn would be an understatement. Apparently deserts get really cold at night, who knew? (ok, we may have had some idea). We slept in our leather jackets and were glad that we had nicked the Qantas pillows and blankets from our flight to LA.

When the sun came up we saw all the cacti and realised our parking spot was straight out of an old Western. —road trip pics after the jump—

We were inside the Horseshoe Cafe by 7:30am (a time I normally consider the middle of the night). Breakfast at the Horseshoe Cafe was a real experience. I had read about it online, on a site that said it was the best small-town diner experience in the West. They weren’t kidding. Our waitress looked like a smiling bull, and chirpily told us that “nobody leaves the Horseshoe Cafe hungry”. Paul ordered a two egg omelette, and I ordered a half serving of buttermilk pancakes. Neither of us could finish. I was full halfway through my first pancake! They were delicious though, I felt wasteful. First time I’ve ever failed to finish a meal that cost me less than $4.

I’m not sure whether my favourite thing about the place was the lasso in the men’s toilet, or the way the waitresses started beeping whenever they passed each other, after colliding three times in 10 minutes!

The drive north on the Black Canyon Highway was beautiful. It took us about 4 1/2 hours to get from Wickenburg to Tusayan (which is just 5 minutes before the Grand Canyon). There’s a faster route, but we were told this one was worth the extra miles, and it definitely was.

The roads we passed had wonderful Disney villian-esque names like “Bloody Basin” and “Coldwater”.

By Flagstaff, we were at 8000 feet and all our chip packets were on the verge of exploding! Flagstaff is quite an alpine town, and from there the view of snowy mountains is incredible. Yes, snow! In Arizona! We stopped and went for a short hike at one point. It was freezing! Paul couldn’t find his scarf and wore his Qantas blanket on his head like a Bedouin. 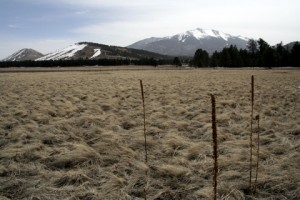 We’re now resting at our motel (the most expensive room on our trip because it’s so close to the canyon). We plan to watch sunset at the canyon and then make use of the spa pool later. I can’t help but feel like we deserve it!

3 thoughts on “The Black Canyon Highway”