Skip to content
Posted on March 18, 2011January 20, 2015 by Andrew
We went to Mexico today. It feels really weird to say that… even though Tijuana is hardly representative of real Mexico. I guess as a kiwi I find the whole concept of a border crossing on land somewhat foreign.Our hotel is so close to the border that we could probably walk. You can drive to Mexico in less than 10 minutes. We’re not insured if we take the car over, so we left it in the last parking lot on the Californian side and then headed over on foot. Despite being told how relaxed it would be, we were surprised that we didn’t have to talk to a single person to enter a new country. We just walked through some barred gates and we were there. 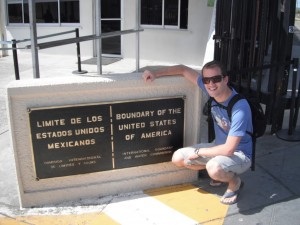 When originally planning this trip I’d tried really hard to get us into real Mexico – I had my heart set on Acapulco. When that prove impossible in our timeframe, we had to settle for something closer to the border. I’d been warned that Tijuana was a waste of time, so we headed 40 minutes further along the coast to Rosarito Beach. Not much better, but something.

It reminded me a lot of Bali, except I was surprised how many high rise buildings there were. All of them seemed to be either abandoned or still under construction. The most interesting thing I found out about Rosarito Beach is that it’s where most of the deep sea scenes in Titanic were filmed. I guess it was handy because it’s less than 3 hours drive from Hollywood. 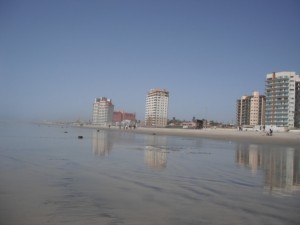 We soon found a place we could get chicken fajitas and pina coladas (in pineapples) on the beach. A lot of things about the place felt really American, not least the music, which was more Bon Jovi than Mariachi. 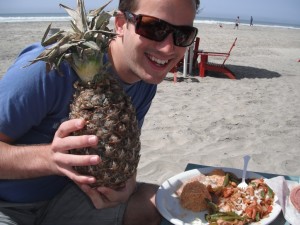 After a few hours, which included buying a little mascot for our car from the little markets, we headed back towards the border.

We were shocked by the queue when we got to the border. We had expected it would take half an hour or so, and weren’t prepared for the 3 hour long queue of people we saw in front of us. We ended up paying $5 to catch a shuttle over, just so we could go in the vehicular queue. It still took nearly two hours.

Highlight of the day: watching a mexican girl put a huge pinata shaped like a person through the security scanners.