Skip to content
Posted on June 24, 2012January 20, 2015 by Andrew
When I was ten years old, a new girl joined my class. Her name was Amra. I remember thinking that her big brown eyes were beautiful. She was Bosnian, and her family had fled the country.
I haven’t given Amra much thought over the years. But today I started to understand what this young girl was going through in her home country while I was climbing trees and complaining about having to eat tomato.

Our first stop in Bosnia is Mostar. The old town is stunning, though it’s hard not to notice the ruins left behind from the war for independence 20 years ago. 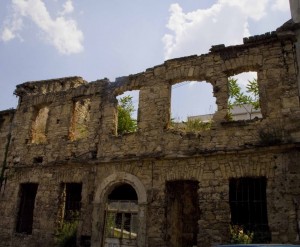 Busabout has arranged a local tour guide to show us around Mostar and explain some of its fascinating history. The highlight is at the end, when a local boy jumps off the famous Mostar bridge for us. 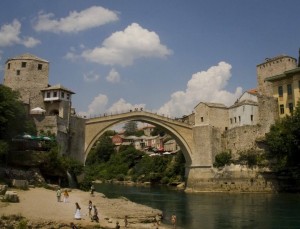 It’s 43° in Mostar today, and we’re roasting. I spend my free time buying many gelatos and cold drinks in quick succession. For lunch a small group of us find a small Bosnian restaurant in the old town that makes us delicious pastry tubes filled with meat, cheese or potato. Each one is roughly the size of a large pizza slice, and costs just €1. 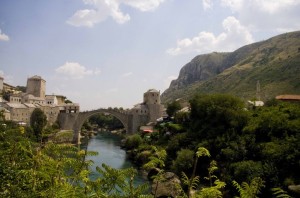 A few hours later, we arrive in Sarajevo. Our hostel is well located and a patio area on the roof offers a great view towards the houses on the surrounding hills. It’s easy to understand how the Serbs were able to bring Sarajevo to its knees for three years by controlling the hills. 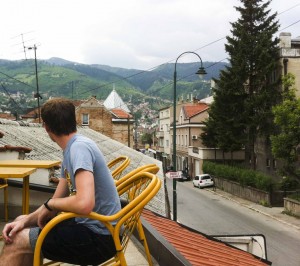 Dinner tonight is traditional Bosnian. It’s a delicious spread of meatballs, pork skewers, and stuffed onions which tastes as though it has been slow cooked in meat stock. I could easily have eaten another plateful, but am glad to still have space when I see the dessert plates! Everyone at my table of six has something different,  mainly apple-based. We pass them around and try a bit of everything. 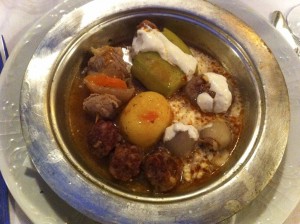 It rains overnight, so the next morning the hot sun is back out. 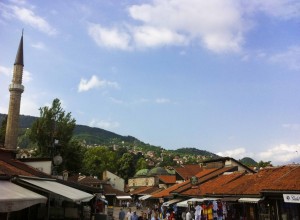 This morning starts with a walking tour of Sarajevo. Our guide is a girl about my age, who looks a little bit like Amra.

She shows us the spot where Archduke Franz Ferdinand was assassinated, sparking the first world war.

She takes us to see the main religious buildings of Sarajevo, pointing out how close they are. The Bosnian War is sometimes blamed on religion, but she rebukes this idea and tells us the story of the most valuable Jewish book in Sarajevo, an 800 year old sacred text which was in the Sarajevo Museum when the raids started. The Museum director was Catholic, but he cared enough to risk his life to get the book to safety. He knew where it would be safest; in the vaults beneath the mosque. So he gave the book to his best friend, a Muslim, who safely hid it. The book survived the war and can still be seen in the Museum today.

Then, we’re whisked half an hour away on the bus, to the site of the tiny tunnel that secretly shipped goods into Sarajevo during the siege. We watch a short video. I find it strange seeing war footage in colour.
Our guide tells us some of her own story, about developing osteoporosis from lack of sunlight because she wasn’t allowed to go outside and had to stay in the basement all the time.
When we leave the tunnel, we’re shown a plaque with the names of every person who died in Sarajevo during the war and siege. I find Amra’s surname and see it has the longest list of people who passed away. I have no idea whether her family were even based in this part of Bosnia, but it still sends shivers down my spine.
After the walking tour has ended, we relax with a traditional Bosnian coffee and lunch in a tree-covered courtyard where the city stables used to be. 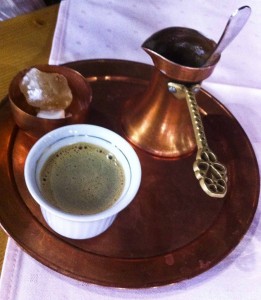 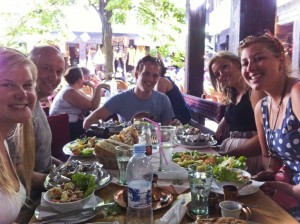 That night we’re delighted to discover Zlatna Ribica, a vintage steampunk bar with eclectic photoframes, books and furniture all over the walls. 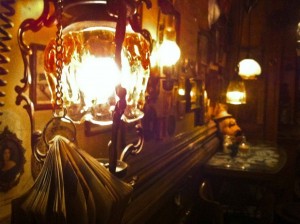 It’s one of the best bars I’ve ever been to, and I find myself wishing it was in London so I could be a regular. 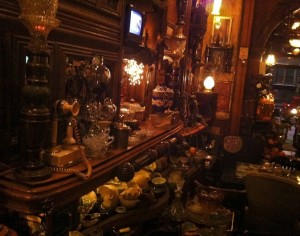 The people of Bosnia are firmly focused on moving forward now, and it’s comforting to see the little steps they’re taking to rebuild and recover.