Skip to content
Posted on October 24, 2012January 19, 2015 by Andrew
“The place on the planet with the most visible stars”. That’s what sold me on Wadi Rum, Jordan as the place to realise my goal of spending a night in the desert. And it turned out that the desert made famous by Lawrence of Arabia was special for a lot more than stars.

When we arrived, we were met by Atek, our pre-booked bedouin guide. It’s surprisingly easy to book a night in the desert online. 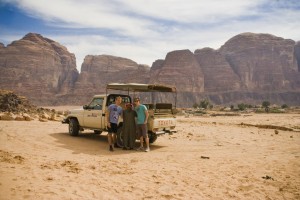 The first thing we noticed walking towards the 4×4 was that the windscreen had a huge webbed smash . But Atek didn’t seem to mind. We sat on fixed chairs on the tray in the back, and he would glance at us in the rear vision mirror with a huge grin, laughing as we became accustomed to the wild lurching motion of the vehicle moving. Every few minutes there’d be a loud grinding sound. Atek would turn around to face us and laugh “no clutch!”

The scenery was undeniably breathtaking. Possibly the best I’ve ever seen. Definitely the most unexpected and least repeatable. I always imagined all deserts to resemble the Sahara – rolling banks of infinite golden dunes. But in Wadi Rum the sand is every shade between bronze, rust and red, and the rolling dunes are punctuated by enormous canyon-like rock faces rising from the sand.

Standing in Wadi Rum and looking around, you could well be on Mars. And indeed it has substituted for the red planet in more than one movie. 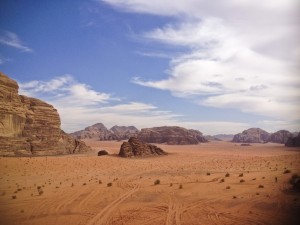 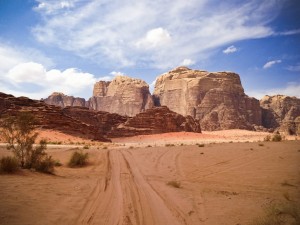 Conversely, the ‘attractions’ we’d actually heard of before coming, such as Lawrence’s [of Arabia’s] Springs turned out to be kind of anticlimactic. I’ve seen toddlers who can piddle faster than that spring. I guess being from New Zealand, I’m inclined to take water features for granted more than the average thirsty desert-dweller.

After a few hours of wide-eyed driving, including a few short climbs to panoramic vistas, Atek pulled over and climbed a few metres up the rock face to a small shelf. With a cheeky look in his eye he asked if we knew why he’d brought us there, then said this was his favourite part of the day.

“How you say hello in New Zealand?”

“KIAARAAAAA”, shrieked Atek, as if in response.

The sound of his cry reverberated around us in every direction, a supersized echo taking on its own shape and continuing for what felt like ages. I turned immediately to my brother Michael, who is profoundly deaf. He was astonished, having just heard his first echo. 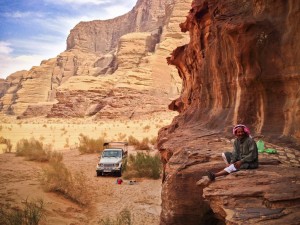 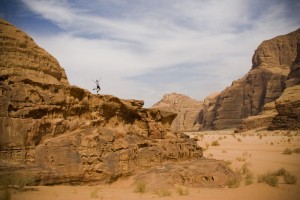 We stayed put for ages, enjoying creating every echo we could think of. While we sat there, Atek made a small fire and began cooking lunch for us. Pita the size of a table cloth, a whole tomato and cucumber each, laughing cow cheese, canned tuna, and more mint tea than we could drink. 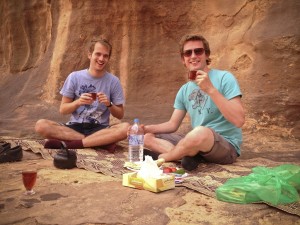 After lunch, we drove to the steepest dune I’ve ever seen. Atek took a snowboard out of the car. 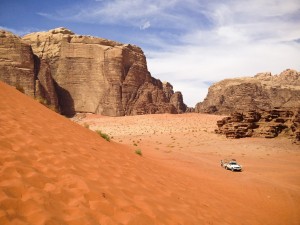 I’m sure the gears turning in my head were visible as I realised what was about to happen. SAND BOARDING! 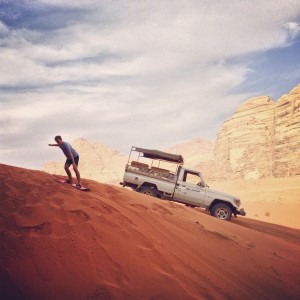 Having never been  snowboarding, I wasn’t sure how I’d fare. But I discovered that not only was it relatively straightforward to stay on the board, falling off didn’t hurt! After several goes, I had red sand in every bodily crevice. I was still washing it out of my hair, ears, and elsewhere days later in London.

When planning the trip, I had worried that a whole day in the desert would be too much. Wouldn’t sand, sand and more sand get boring? Nope. 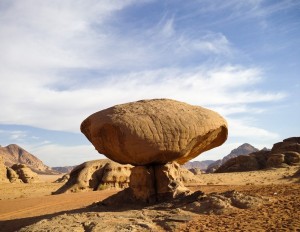 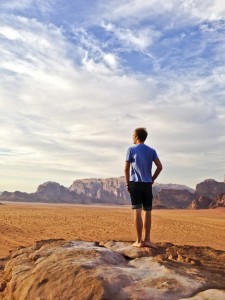 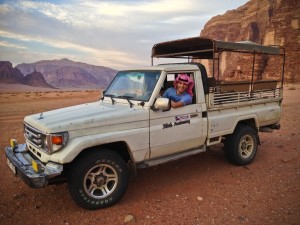 Before the sun went down, Atek drove us to the place he believes has the best sunsets in Wadi Rum. Understatement of the century: he was right! 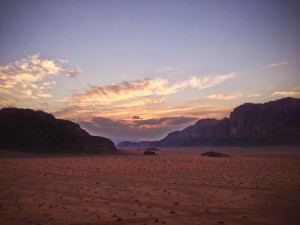 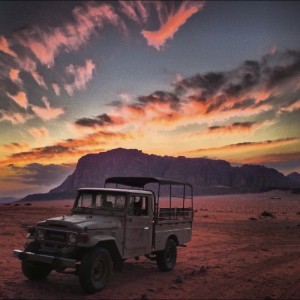 After sunset, Atek drove us to his desert camp, where his wife Alia had already prepared a feast of epic proportions. She’d barbecued the chicken to perfection on an open fire, and served it with several kinds of Jordanian salad and rice.

The open fire provided our light, and we sat on thin cushions facing each other. Alia taught us a few words of Arabic, then challenged us to get up and dance while she plucked a small instrument and Atek sang. We couldn’t quite shake the feeling of looking like a pair of headless chickens, but nonetheless obliged. 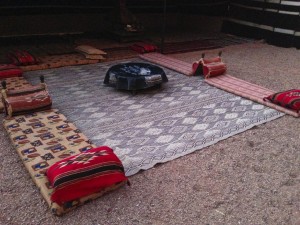 Afterwards, we walked out into the sand with bare feet, away from the light of the camp, and looked up to the stars. There weren’t as many visible as we’d been hoping – it was a cloudy night and the moon was bright.

But after about 20 minutes, we saw a brilliant green flash in the distance, and something resembling a comet darted across the sky with immense speed. Trying to remain sane, we surmised that it could have been a flare or something less exciting. But without any kind of smoke trail, were unable to think up any other plausible explanations for the celestial occurrence.

Our beds were inside a large bedouin tent. They were extremely comfortable, and we fell asleep immediately.

When we woke, we discovered that we were right next to an enormous rock face. I guess that’s the joy of Wadi Rum for you! 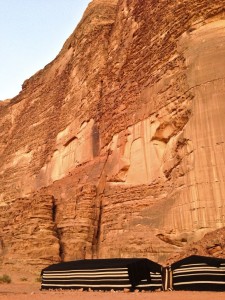 3 thoughts on “Adventures in the Jordanian Desert”