Skip to content
Posted on October 26, 2012January 20, 2015 by Andrew
The main thing that struck me about the Jewish state was that everything important or interesting had a church built right on top of it. The shepherd’s field? Church. The stable in Bethlehem? Church. The possible site of Jesus’ crucifixion? Church. The sites where water was turned to wine, loaves and fishes were multiplied, and Jesus was baptised? All churches. There’s even one where Mary supposedly breastfed her holy wee son.
The sheer number of churches was curious to me given Judaism’s position on Christ, and the relative invisibility of synagogues by comparison. The realisation that the historical places I’d hoped to see had been completely bowled over and replaced with a hundred fairly typical churches – like seeing your childhood home flattened to build a mall – came quickly.I guess with the amount of preconceptions I had about the holy land, I was bound to find 21st Century Jerusalem, Bethlehem, Nazareth and Galilee somewhat less than divine. Disappointing, even.

So, I felt like I had no choice but to ignore my preconceived hopes and focus instead on the genuine experiences that were still possible, regardless of their historical significance or lack of.

There are five that stand out. Perhaps unsurprisingly, none of them are churches.

I’ve wanted to take this photo on the Dead Sea ever since I was a kid. And somehow I’ve always thought I’d be the first person who couldn’t float in the Dead Sea. But, thankfully, I found the water so buoyant that it was difficult to sink – once the water passed chest height, I was unable to reach the bottom. The Dead Sea is the lowest point on earth, so it’s a bizarre feeling swimming there. And the water feels thicker – the extra salt and minerals are actually tangible. Just don’t put your  head underwater… it stings like getting chilli sauce in your eye! 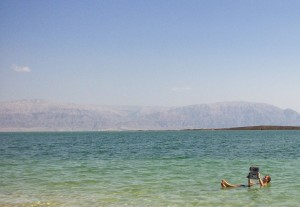 2.  The Via Dolorosa
The Via Dolorosa has been a bustling shopping street for millennia, and criminals being crucified had to carry their crosses up it. When we were there, it was a public holiday and most of the city was closed for business, including the Via Dolorosa. So what we were struck with was a kind of eerie calm – like an empty fairground. This was the only place in Jerusalem where it was really possible to comprehend what it would have been like 2,000 years ago. 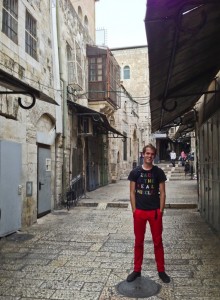 3.  The Wall
The wall that divides Israel from the Gaza Strip is 7 – 9 metres high. And standing next to it on the Palestinian side, it was very clear to me that it was designed to keep me out rather than the other way around. I found it fascinating reading the messages of hope that had been spray painted on, much like in Berlin; e.g. “the Palestianian spirit is stronger than any wall” and “Make hummus, not walls”. Visiting the Gaza Strip wasn’t anywhere near as difficult or as scary as I’d been led to believe. I never felt unsafe. But it’s a strange feeling writing this just two weeks later in light of the fresh conflict in the area.

4.  The Dome of the Rock
The mosque called the Dome of the Rock is undoubtedly the most beautiful building in Jerusalem. When the sun is out, the solid gold roof gleams like an expensive piece of jewellery. Because non-Muslims aren’t allowed to enter, the best place to observe it is from the Temple Mount, where the panoramic view of old Jerusalem is extremely impressive. 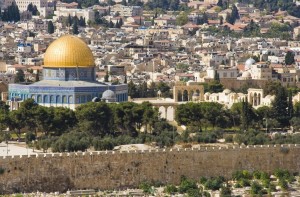 5.  The Sea of Galilee
In the north, the only site we visited that hadn’t been knocked over and turned into a church was the Sea of Galilee, which, for obvious reasons, is the one place to remain relatively unchanged for 2,000 years. Standing on the banks with my brother, we were finally able to get a spatial sense of where we were, relative to the stories that we were so familiar with. 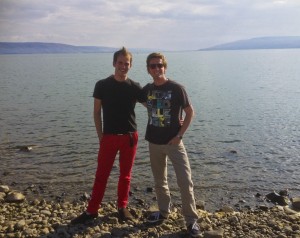 In hindsight, I think my expectations of Israel were a little naive and unfair. I’m glad that I was able to put them aside and enjoy what the country could still offer, rather than feeling too short-changed. I doubt I’ll ever return, because I found that Jordan and Egypt both had so much more to offer, but I have no regrets about going.