Skip to content
Posted on December 30, 2011January 19, 2015 by Andrew
Ice sculptures. That’s how I ended up in this park in the middle of nowhere in Moscow. Ice sculptures.
My best friend came here ten years ago and raved. There were photos. Good photos. I was jealous. Now I’m here to see them for myself, and there’s nothing.
Or at least, it doesn’t look like there’s anything.
We’ve been walking for an hour since we got off the metro, and finally reached Krasnaya Presnya Park, home of the Gallery of Russian Ice Sculpture, aka an ice amusement park! 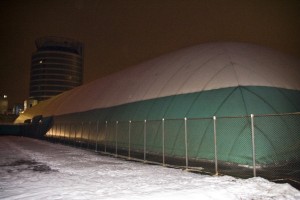 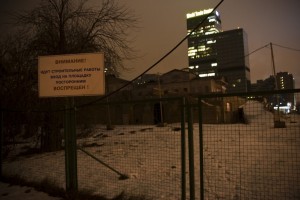 Except all we can see is two temporary looking buildings. One is a massive deserted building, fenced all round with an ominous looking warning sign. It looks like a great setting for a nuclear horror movie. The second building is on the other side of the park and looks like a bouncy castle dome. Neither of them looks much like a gallery of Russian Ice Sculpture.
So we walk into the park.
Whoever designed this park has sliced it into long strips by placing a hairpin shaped body of water running the entire length, with a tiny island at the other end from us.
We walk all the way along and get hopeful: there’s a truck unloading fridge-sized blocks of ice.
Then we spot this on the tiny island: 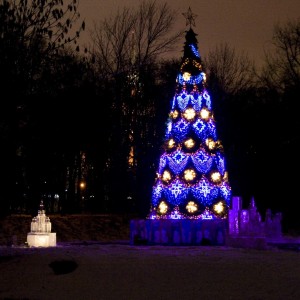 Success! Sort of. This photo was taken with a very zoomed in lens. We can’t actually tell what the tiny sculpture is. The ice block carrying truck men won’t let us on to the island.
So I become convinced that this isn’t actually the Gallery of Russian Ice Sculpture. “This is just the foyer of sorts”, I say. I’m convinced of this because the website says they’re open year round.
I decide we should walk right back along the other side, certain that we’ll locate the ice sculptures.
We walk all the way along the river’s edge and then discover that we’ve locked ourselves in. The only way to get to where we want to be is to either cross the river, or walk back.
The river looks sort of frozen. ish.
There’s a spot where we can cross without having to put our whole weight on the ice. Just one foot on the ice, the other on mud and rocks. There’s a hurricane fence to hold on to on the way down, and weedy looking roots as we cross the water.
About halfway across, I go through the ice. And shriek like Fay Wray.
Thankfully, the sludge beneath the ice is only ankle deep, so though my leather boot looks like it’s been up close and personal with elephant poo, I don’t tumble in completely.
But somehow my weedy looking root has snapped. Paul’s on the other side already and laughing at me.
I make it across.
That’s when we realise that we’ve miscalculated, and rather than being on the other side of the river, we’re just on another island-y bit in the middle. We have three choices: go all the way back; cross another, much deeper looking river; or scale a large hurricane fence with barbed wire at the top and walk around.
We scale the fence.
A moment later I see a familiar looking sign and realise where we are.

We’re inside the nuclear horror movie. Although on closer inspection, the red warning sign could also say something about live landmines.
Paul want to sneak in further and check out the abandoned building. I’m not sure what’ll happen if we do, but I know it will either involve death or the KGB, and probably both.
So I scale one more fence, this one at least 2.5m high, and get groundshock as my feet thud to the ground on the correct side.
We’re standing exactly where we were about an hour and a half earlier. We could have walked the long way back around the river and back about four times by now.
You live and you learn, eh?
Oh and we checked out the bouncy castle dome thing before we left, just in case.
It was an indoor tennis court.