Skip to content
Posted on October 4, 2012January 20, 2015 by Andrew
Flying over Iceland, you could be forgiven for thinking you were looking down on the moon. Vast stretches of the countryside are reclaimed land from some of the largest lava flows in history, and the resultant cratery desolation is as beautiful as it is bizarre.But any geologist will tell you there’s a lot more to a volcanic landscape than just the bleak lava flow area. And the best thing about these volcanic landscapes is the geothermal activity, something Iceland has a seemingly unlimited supply of. When you arrive at the airport, large signs promote the country’s green image, proudly informing you that Iceland has no need for ‘dirty’ power like coal – they get all the electricity (and most other energy) they need from renewable sources like hydropower and geothermal power.

However when I hear ‘geothermal’, I don’t think ‘renewable energy’. Nope, the child in me shrieks ‘hot pools’! And just 20 minutes after leaving Iceland’s Keflavik airport, we were pulling up at the Blue Lagoon: Iceland’s premiere tourist attraction. 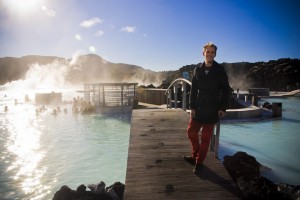 The pale milky blue colour of the water gives the lagoon an otherworldly glow. I felt like I’d inexplicably turned up on Avatar’s planet Pandora. Though, it smelled more like Rotorua. 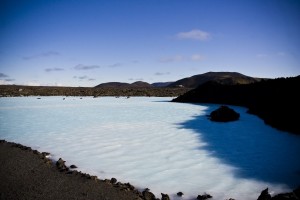 The milky appearance turns out to be from the silicon in the water, which congeals as a kind of mud around the edges of the pool. It’s meant to be great for your skin; you can buy little pots of it in the gift shop for a small fortune. But while you’re enjoying a quick dip in the 37° lagoon, you’re encouraged to scoop it up from large buckets placed helpfully around the edges of the pool and smother your face with it.

Upon leaving the lagoon, Reykjavik is an easy 40 minute drive away. It’s the northernmost capital in the world, and compared to other Northern capitals I’ve visited it’s a little… sleepy. There’s not a huge amount to see or do, but it’s a nice place to spend an afternoon. Here are some of the highlights:

After exploring Reykjavik, it’s time to embark on the traditional circuit around Iceland’s three most popular scenic attractions:

Þingvellir National Park
This is the site where the world’s first democratic parliament was established over a thousand years ago. It’s a great spot for it too – right by the Mid-Atlantic Ridge where the Eurasian and North American tectonic plates meet. And the Autumn colours in this area make the scenic drive through even more worthwhile. 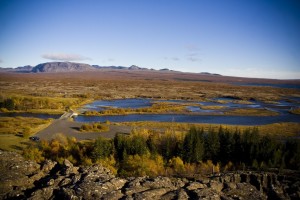 Geysir Geyser
This geyser gave its name to all the world’s geysers – the English word is adopted from Icelandic. Geysir itself only blows a few times a year, but nearby Strokkur was spectacular enough for me! It performs about once every five minutes – so we stood around to watch it three times! The water moves as though alive, slowly building up pressure and teasing tourists with cameras into snapping too soon. Eventually, it explodes about 20m into the air, and everyone looks on in awe. 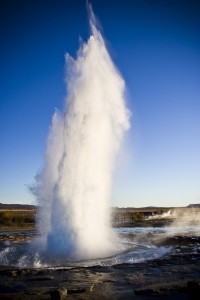 Gullfoss Waterfall
It’s difficult to capture with words the sight of hundreds of cubic metres of water per second vanishing into the earth. In fact, it’s [only] dropping 32m into a crevice, but the abrupt angle makes it impossible to see (or photograph) the bottom of the waterfall without the help of a helicopter. Though not the most captivating waterfall we encountered in Iceland, Gullfoss is pretty special and well worth a visit. 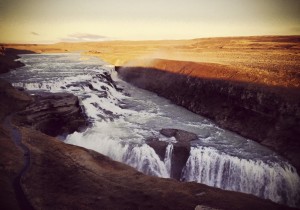 Our first day in Iceland was so epic that we barely even registered the fact that the Northern Lights didn’t make an appearance!