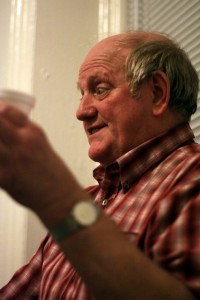 Snoring Lamp Man moved into our four bed dorm the same day we did. He’s from Birmingham. And he came here for a lamp. This lamp: 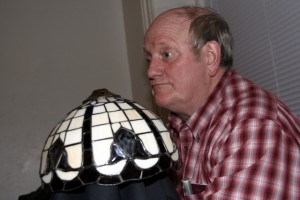 You see, it’s the original Tiffany & Co lamp, and it’s really worth £20,000,000 (Tiffany’s made stained glass windows and then lamps before getting into jewelry). Those art historians here are all rubbish because they think it’s a fake, but Snoring Lamp Man knows better! He paid £600 for the base, and another £400 for a Tiffany inkwell he thinks was made at a similar time. Just so he could destroy it and take out the glass for comparison.


And now he’s in New York, intent on proving it’s worth. Apparently he’s already been on Antiques Roadshow, but “they don’t know jack about American stuff”.


Today he went to meet a guy in Flushing who apparently has papers that might prove something, but someone tried to commit suicide on the #7 line, so they shut it down for the first time in 40 years at exactly the same time Snoring Lamp Man needed to use it. So he went to a lamp museum. It was boarded up. So he went to a church that Tiffany had done the windows for. It had been demolished. He calls it his “reverse miracle” and came home to his whisky from a polystyrene cup, like he’s done every night.


I secretly hope it does all pay off. I’m not sure if my life lesson is to steer clear of becoming Snoring Lamp Man or to do the opposite. But I’m sure I learned something.