Did you see me on the telly today? I’m sure you must have… I was standing right here: 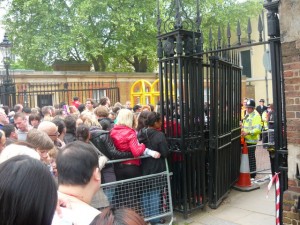 …in front of these people: 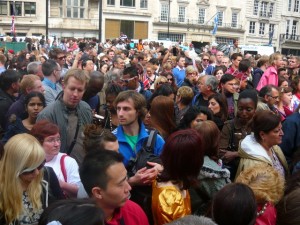 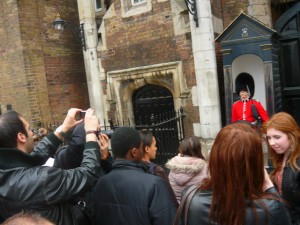 …just behind this big brick thing: 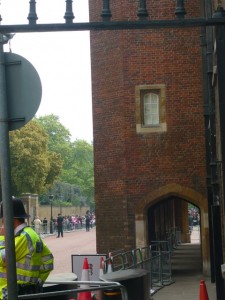 Didn’t see me? That’s a shame. We had an excellent view through that little gap in the archway you can see in the photo above? Twas enough to view the procession through. Well, to view people on horses anyway. Actually, the heads of people bobbing up and down in a way that suggests they must have been on horses. And there was a carriage at one point. But not the carriage – that was topless and therefore waaaay beyond possible-viewing-distance!

But, we had a great time anyway and don’t regret braving the crowds. My good friend Emily joined us last night, to spend the Day of the Royal Wedding together. 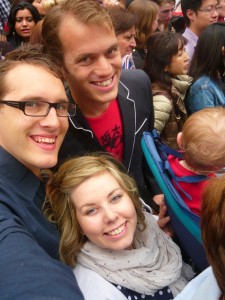 We tried to see the ceremony from the big public screens in Trafalgar Square, but it was so packed that they’d closed it off, so after catching Kate’s walk down the aisle with our peripheral vision from behind a tree, we headed up Pall Mall hoping to find a spot somewhere remotely near the processional route. Turns out it was quite busy. 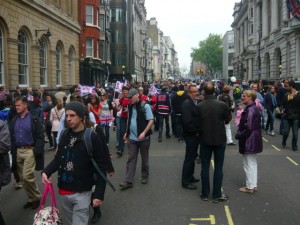 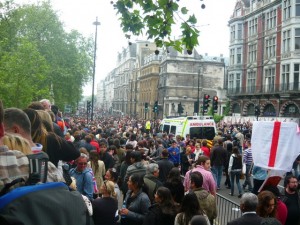 It was festive though, and despite hearing and seeing absolutely none of the rest of the ceremony, we still enjoyed the atmosphere. We finally ended up just by St James’s Palace, which is where the photos earlier were taken. It’s the closest we could possibly have got – we were very lucky to have seen as much as we did! Sometimes a glimpse is enough.

Once the white vans started coming along The Mall we knew it had to be over, so headed to Green Park (where it was just as crowded). That’s when we saw the fighter jets coming overhead, which is probably the only part of the day that’s better live than on TV!

Once the jets had passed (meaning the kiss was over), the people thinned a little, and we could stand on the edge of a barricade in order to glimpse the edge of a big screen that was obscured by trees anyway. 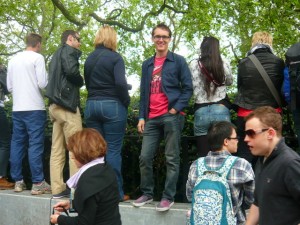 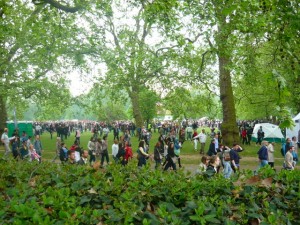 But it’s all part of the fun, right! Knowing we wouldn’t be able to see anything else, we took the tube back to our nearest, and much less crowded, park: Regent’s Park. No royals, but a nice afternoon anyway. 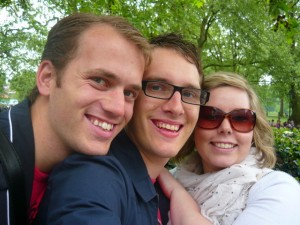 4 thoughts on “Life Lesson #22 – Sometimes a Glimpse is Enough”