Skip to content
Posted on August 2, 2012February 5, 2015 by Andrew
Like most Londoners, I missed out on tickets to the Olympics. I tried dozens of times and fell flat. But where there’s a will there’s a way, and there are still  loads of reasons it’s awesome to be in London during the Olympics – even if you can’t catch any of the events in person.

Reason #1: seeing the torch in your own neighbourhood
We got up early and met friends around the corner to see the torch pass down the end of our street. The whole area was buzzing and it was a joy to be part of. The next day, I was also fortunate enough to catch the torch near my work – by Vauxhall bridge on its way up the Thames to Olympic Park.

Reason #2: the Red Arrows
The pre-show for the opening ceremony kicked off at 20:12 with an aerobatic flypast from the nine Red Arrows. It looked great on the tele, but even better when the deafening boom started to reach my own ears moments later – I quickly threw my head out the window in time to see them fly overhead in person.
Reason #3: Olympic Fever
You can’t help but feel great in London at the moment. There are no roadworks, Leicester Square is open again, there’s public art everywhere, and everything has been tidied up like mum doing a quick spruce before the neighbours pop round. Regent Street has flags from every Olympic nation. You can’t cross the road without seeing an official vehicle or ten. And on the tube the other day I saw some Czech team members hugging in their official gumboots. It warmed my heart. 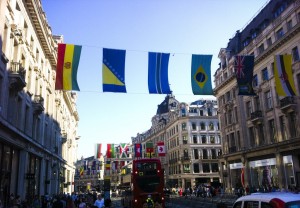 Reason #4: Hyde Park
Hyde Park has become a pumping village with huge screens showing every event. The best part of watching the road race on the first day of the competition was the roar of the helicopters drawing nearer as the cyclists approached the finish line at nearby Buckingham Palace. 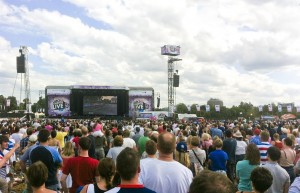 Reason #5: Timezone
As an antipodean, I’m accustomed to watching the ceremonies over breakfast. Catching a daily highlights broadcast. Waking up in the morning to find out how we did overnight. It’s amazing the difference that something as simple as being in the same timezone can makes. Case in point: the other kiwi in the office and I sat in reception to watch the BBC broadcast of the big rowing race today. When Team NZ won, we went racing around the office shrieking with delight!

Reason #6: Kiwi House
On Tuesday, for the first time in nearly eighteen months, a stranger greeted me with “kia ora”. It felt fantastic. Kiwi House is the home away from home for supporters of the New Zealand Olympic Team. My accent instantly thickened and it within minutes I’d ordered a kiwi sauv and made myself at home. (And yes, I ran into someone I knew!)

3 thoughts on “The Olympics Without a Ticket”