Skip to content
Posted on August 31, 2012January 18, 2015 by Andrew
Today, for the second time in a month, I ended up naked in front of my entire tour group and an ensemble of assorted strangers. Well, almost naked.

After being entertained by her display of belly flexibility, I think nothing of it when she starts pulling out random men from the audience. She gets to about five, then puts them all in a line.

I’m looking straight at her, when suddenly I realise she’s returning the gaze. Apparently five men isn’t enough. I do the obligatory “who, me?”-face-of-sweetness-and-innocence, but it’s too late. She already has an evil gleam in her eye.

Seconds later I’m onstage. And she’s tugging my shirt upwards. Awkward giggles are exchanged as the other men suffer the same indignity. 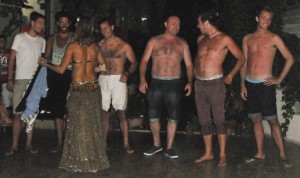 Then, she’s back for more. With her finger and her thumb, she expertly undoes my pants and whips them off. Good thing I didn’t go commando. 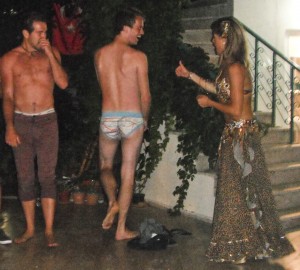 Next, she pulls out a hanky-sized strip of fabric and ties it around my waste. It’s pink. And covered in bells. Of course it is.

She doesn’t actually speak, but that’s what her eyes are saying.

If there’s one thing my time at High School taught me, it’s that there’s only one way to keep your pride during moments of humiliation. Go one up on them. Turn the other cheek, if you will. So, I stand there with a big grin and wiggle my hips like Beyoncé’s androgynous cousin. Then I try a shimmy for good measure. And a booty shake.

Once we’re all decked out like a hairy harem, she cranks the music up and starts teaching us moves. Shimmy around, roll your arms, stick out your bum, then belly roll. Now she makes us do it alone, one by one.Determined to beat the shame by over-delivering the ridiculous choreography, I tart the whole thing right up. I may feel like slitting my wrists on the inside, but outside I’m smiling! 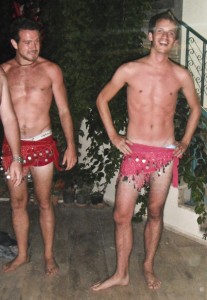 After a few more rounds of belly rolls, she starts eliminating men. And it’s down to two of us. I was never introduced to the other guy, but he looks to me like the sort of bloke who would be a plumber from Essex named Phil.But hang on, the eliminated guys get to put their clothes back on. No fair! And what’s she pulling out of her bag of tricks now? That would be the top half of the outfit. It’s purple. And also covered in bells.

She doesn’t actually speak, but that’s what her eyes are saying.

I feel excruciatingly ridiculous. I have no idea how to sexy dance, but I give it a shot. When I’m out of moves I progress to the chicken dance. The only think keeping me from jumping off a ledge is the realisation that Phil the plumber is far, far more uncomfortable, and far, far worse at this than I am. It’s a sick world where schadenfreude, rather than solidarity, brings comfort in the most mortifying moments, but there you have it. 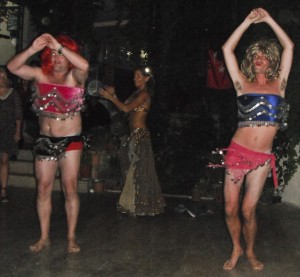 After what I could swear is 20 minutes dancing alone for jeering crowds (who can’t quite believe their eyes), suddenly Jezebel returns, grabs our hands, bows with us, then laughs at us and kicks us off stage.I put my clothes back on and return to my seat. Everyone’s laughing, saying I was hilarious. I’m a little confused… clearly they weren’t watching the humiliating series of events I just participated in.

Shortly afterwards, Jezebel leaves in plain-clothes. I start to feel self-righteous. Where is my prize? Surely if the evening’s entertainment is to laugh at me, I deserve some sort of remuneration?

With Jezebel out of the building, I have only one option, and make my way up to the bar. I deliberately pick the girl with a kiwi Mr Vintage tee, and explain the gross injustice of my plight.

She laughs and pours me a shot. It’s blue and smells like raspberries. My indignation evaporates.