Skip to content
Posted on September 1, 2012January 20, 2015 by Andrew
I had a dilemma back in June. How can you possibly explore a city as vast, as cosmopolitan and as interesting as Istanbul in just a day?I decided you couldn’t. So I didn’t try to. I was fortunate enough to know I was coming back for another day a few months later. So I ticked off half of my hit list in June (see the post here), and now I’m back for more!

7.  The Blue Mosque
The Blue Mosque feels relatively modern in a city with history as rich as Istanbul. After all, it’s only 500 years old – constructed more than 1,000 years after the Hagia Sophia. Unlike Hagia Sophia, this is still a functioning mosque. So you can only walk through outside the hours of prayer, and you have to take off your shoes. 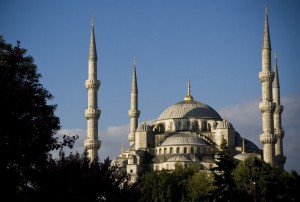 The gold and iridescent blue on the inside is stupefying. And because it’s still a functioning mosque, you can only walk around part of it – which strangely adds to the charm. 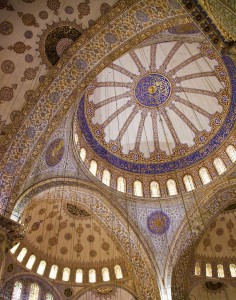 8.  Topkapı Palace
All you kids who have dreamed of seeing the prophet Abraham’s saucepan, look no further. It’s right here in Topkapı Palace, along with other relics like Moses’s staff, Joseph’s turban and Muhammed’s footprint. Though the relics are fascinating, one can’t help but consider them a little far-fetched, so the real highlight of a visit to Topkapı is undoubtedly the palace itself.

And specifically, the harem. Back in the day, being a wife or concubine of the sultan was a pretty desirable job. With intricate İznik designs covering every wall inside the harem – it’s an environment not unlike walking around inside a kaleidoscope. Compared to the world outside the palace, the women of the harem had a fairly good deal.

Make sure you set aside at least half a day for the palace. It’s enormous, and just about all of it is remarkable if you know what you’re looking at – which is a good reason to buy the guide at the gift shop before you go in.

9.  The Spice Bazaar
The second largest covered shopping complex in Istanbul (after the Grand Bazaar, naturally) has a smell that hits you the moment you walk in, but is impossible to describe accurately because of the way it evolves as you walk around. I found myself musing over whether blind people would be able to navigate the bazaar by smell alone. One step and your nostrils are overwhelmed by mint, and the next, some exotic blend of spices that the shopkeeper assures you is his grandmother’s secret recipe – certain to make every meal delicious.

And there’s Turkish delight everywhere. After far too long (two months, to be exact), I’m reacquainted with the most wonderful creation in the history of confectionary: pomegranate and pistachio Turkish delight. 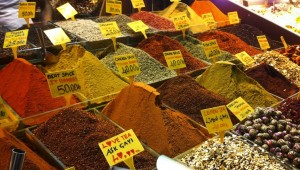 I’m sorry to leave Istanbul. If only because I failed to find any new restaurants worth recommending (despite choosing carefully based on independent reviews).

Oh well, I guess I’ll just have to come back.