Skip to content
Posted on May 6, 2012January 20, 2015 by Andrew
My phone chirps just after I cross the border. It’s O2. “Welcome to Turkey!” the txt proclaims.
Though the UN doesn’t recognise the Turkish Republic of Northern Cyprus as a separate country (the Turkish government is the only one that does), apparently the political quagmire of recognising divided Turkey’s occupation of Northern Cyprus is less of a concern for telecommunications companies.
I have to pay €20 at the border to extend my car insurance, because none of the Southern Cypriot rental companies will cover me in the North. Knowing that the political relationship is less tense these days (there were reunification talks as recently as 2004 when Cyprus entered the EU), I thought nothing of asking the guy from the car rental company for advice on how best to cross the border, and whether it was a good idea.
He looked away, paused and said “I don’t know.” A moment passed. “I’ve never been there.”
Indeed, though tourists can cross the border without much trouble, Cypriots themselves are rarely permitted to. I felt a strange sort of responsibility once I realised that I was capable of exploring more of this enchanting island in a long weekend than those who live here can in a lifetime.
Nicosia

Nicosia is the only divided capital in the world, and it’s quite difficult to find the crossing points by car. After a quick pork kebab for lunch and a wander of the streets (which were fairly touristy and mostly unremarkable), we endeavoured to visit the Museum of Cyprus – which was closed – and then headed to the border crossing, which took us a good hour to locate due to a dead GPS system and my generally poor sense of direction.

After we show our insurance paperwork, the agent stamps our passports (which is pretty much a souvenir given the rest of the world doesn’t define it as a real border crossing), and we’re on our way.
This side of Nicosia feels different. I could swear there’s a different light, different air. Clearly eager to make the Turkish mark, there are Northern Cyprus flags everywhere. I’m almost surprised that we aren’t forced to switch to the right hand side of the road.
The most colossal flag I’ve ever seen is painted directly onto the side of the large mountain in front of us. It’s unmissable. No doubt placed that way to taunt the people of the Greek south. 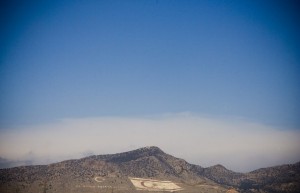 We keep driving for an hour or so until we reach the east coast, where an afternoon of archaeological discovery awaits us.
Salamis
The ancient ruins of Salamis have history stretching back as far as 1100 BC. Because of Cyprus’ prized spot on the fringe of three continents, this ancient capital was the site of centuries of fierce battles. Just about every major historical figure has a hand in the history of Cyprus – Alexander the Great, Cleopatra, Julius Caesar and Constantine, to name a few – as control of Cyprus was crucial to the success of every major empire for over 2000 years: Persian, Greek, Roman, Byzantine, Ottoman and even British.
And the vast majority of the action centred right here: Salamis. 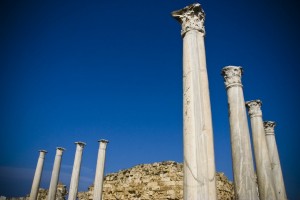 Archaeologically, Pompeii is more significant – because it captures an entire city frozen in time. This enables a thriving tourism industry at Pompeii, but the downside is the inevitable crowd control that results. Key artefacts are replaced with replicas. Anything noteworthy is inaccessible behind rails or glass. Pompeii is something you look at.
But historically, Salamis is considerably more significant than Pompeii. And somehow this hasn’t translated into any kind of tourism industry. Had you heard of it before? I sure hadn’t.
This means that entry is cheap, and we are permitted to park mere metres from the ruins. Though it’s a beautiful day on a long weekend at the start of the high season, our car is one of three in the car park.
But the best part is what we discover when we go in. This deserted treasure is ours to explore at leisure. Everything is open – there are no bars or railings. Salamis is something you can touch, climb, experience. 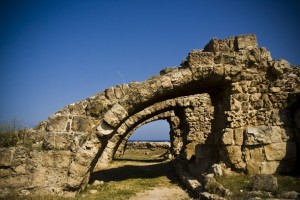 The kid in me is overexcited by the lizards scurrying around everywhere. 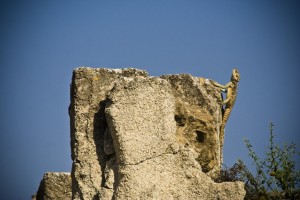 Standing on the top of the Roman amphitheatre leaves me breathless. 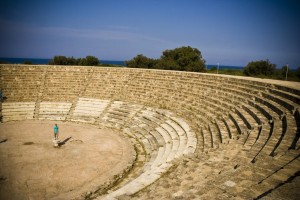 I can’t stop taking photos. There must have been hundreds. 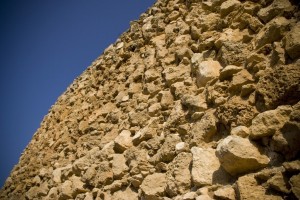 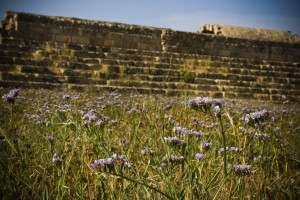 When we’re ready to pull ourselves away, we purchase two syrupy icecreams from a nearby icecream truck and keep driving.
Kyrenia

A few hours later, we reach the north coast, where we discover that a large event has kept us from being able to visit the beautiful misty Bellapais Monastery.

Not to worry, we’ll grab dinner in the small fishing town of Kyrenia.
Major mistake: Kyrenia turns out to be a large city rather than a small fishing town. In the gridlocked traffic and honking horns, we can’t figure out where on earth the lovely little cluster of restaurants in our guidebook could possibly be.
Neither can the military guard who we ask for help when we accidentally end up in a military base.
So we keep driving – though our little detour has taken over an hour due to the horrendous traffic. Fortunately at the top of a large hill just outside Kyrenia we stumble across a picture perfect fish restaurant with a great review in our guidebook and a delicious looking menu.
It’s dark by the time we continue home. The twisting mountain drive takes nearly three hours. We get lost twice, given we still don’t have a functional navigation system, and it’s a relief to cross the border again back to the Republic of Cyprus.
But we couldn’t be more glad that we made the epic effort to visit this oft-forgotten place. Northern Cyprus really is a wonder.