Skip to content
Posted on May 6, 2012February 5, 2015 by Andrew
This is the part where I should mention that I’m allergic to most ocean creatures. I’m good with fish, but shellfish, squid and most crustaceans make my throat constrict and my stomach bloat like I’m carrying triplets.
So, at a seafood restaurant, I’ll always order the fish. But a lifetime of avoiding all other seafood has developed in me an aversion to the idea of consuming any dish where the entire animal is served on my plate. To me this is grotesque and not terribly different from eating it alive. Allergies aside, I’d just as soon eat a grasshopper as a shrimp – no matter how delicious you may claim them to be!
Laughable as it may be, you can imagine my horror when this turned up on my plate at an expensive traditional Cypriot restaurant in Northern Cyprus: 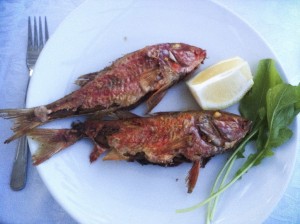 I’m always one for ordering the cultural specialty, but clearly I missed the memo about Cypriots preferring their fish whole, with shrivelled scales and milky eyes.
I could barely look it in the eye. Well, that was the problem. I could look it in the eye!
While it smelt delicious, the cooking process had peeled and coloured the skin somewhat, and my overactive imagination screamed that I had been served a rotting corpse. Sea roadkill. 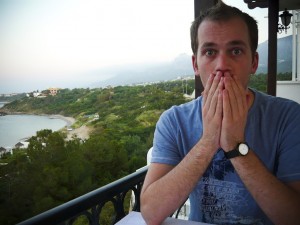 By the time I’ve finished my side-salad, Paul’s made it through almost his entire meal. That never happens. He’s having trouble staying composed as he witnesses my hilariously pathetic revulsion, and my determinedness not to let these two tiny foes defeat me.
Eventually he helps out by removing the heads and tails. This makes it worse. Now I have dismembered corpses scattered around my plate. So, while no-one is looking, he tosses the unwanted parts over the balcony as far as he can.
Though I still have bones, scales and flippers to contend with, at least the contents of my plate now more closely resemble a pair of fillets.
I carefully peel the carcasses, and try as hard as I can to enjoy my meal. The cooked flesh is delicious.
Part of me wanted to be a total convert, newly obsessed with the hunter-gatherer joys of eating creatures whole. Unfortunately, this wasn’t quite what happened and the only way I’ll repeat the experience is if it again happens by mistake. (which is not going to happen anytime soon!)
But I’m still glad that I bit the bullet and ate it, if only in the same way as I’ve been glad I tried other unpalatable ethnic delicacies in the past.
Have you ever been surprised by what turned up on your plate, or had to overcome revulsion to eat a meal? Tell me about it in the comments below.