Skip to content
Posted on October 15, 2011January 20, 2015 by Andrew
When I realised that Portugal was the largest country in Western Europe that hadn’t been ticked off the list, I made it a bit of a mission to book something. Daniel’s upcoming birthday made it the perfect opportunity to go on our first Flat Trip. Just a quick one, flying in to Faro for a relaxing weekend.
We stayed at Clube Praia da Oura in Albufeira, which was monolithic to say the least, and made me thankful we weren’t there at the height of summer along with the rest of England!
The morning was spent at some local markets where Daniel found proper cheese and Zoe bought so many veggies I was convinced her bags would be overweight.
Afterwards, the beach about 100m from our room beckoned. 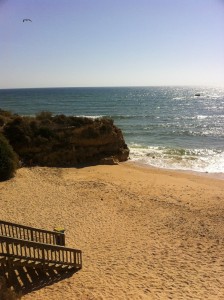 We spent the afternoon lazing between the beach and the spa pool.
Once the sun started to go down, we headed to nearby Praia da Gale where my friend Emily had recommended a restaurant by the water. Our meals were fresh and delicious.

I had my first late-night swim in many years after we left the restaurant, then sat sopping wet and shivering in the back of the car for the short trip home… but it was worth it.

On Sunday morning we woke up to watch the *wait for it* rugby. Watching the All Blacks wallop the Wallabies was an excellent start to the day.

Lunch was spicy Piri Piri Chicken in the town of Albufeira. In Portugal, all chicken tastes like Nando’s… I consider this a good thing!

After lunch, we drove inland to the town of Évora, where they have a Chapel made of bones, called Capela dos Ossos. They’re all hundreds of years old. Creepy, but interesting.

One thing I found really strange in Portugal was the birds’ nests. At first glance they looked like wasp hives, but closer inspection revealed them to be hummingbird-esque habitats. They lined the guttering of every old-fashioned building. 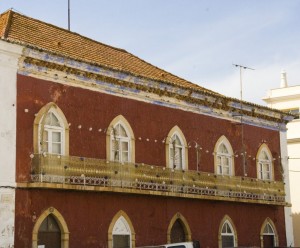 Realising we had half an hour to kill before we were due at the airport, I suggested we check out the local beach. I imagined that a beach just a kilometre from an airport terminal would be a pathetic algae infested estuary, but thought it would make do for killing time. How wrong I was!

In typical fashion, Ryanair made the trip home rubbish with rude staff and a 3 hour delay. But we got there in the end… and it was a pretty awesome trip considering it didn’t even require time off work!