Skip to content
Posted on October 23, 2011February 5, 2015 by Andrew
Wandering the streets of Clapham on a chilly Sunday morning, we couldn’t figure out why none of the bars were open. It’s the sporting event of the year – enough even to rouse me from slumber – and yet everything was closed.Eventually we found somewhere. Called ‘The Frog’. 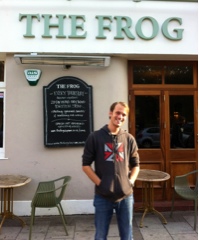 “Odd name”, thought I, “but at least it’s open”.
And open it certainly was, at least 150 people with pre-booked tables were bursting the seams of an otherwise nicer-than-most-bars establishments.
I must confess that I know nothing of rugby. My dad took me to a game when I was a kid and I fell asleep. So, I always take my cue from the people around me. It’s the next best thing to a guy with a sign that says “cheer”.
Except, eventually I realised that I, prompted by everyone around me, was cheering even when the guy running with the ball wasn’t wearing black.
Suddenly the penny dropped and I properly took in my surroundings. The nasal accents. The coiffed hairdos. The over-excited guy with cracking red white and blue face paint.
Unnerved by sensationalist media portrayals of sports fans in England, feared for my life. For a split second I even contemplated closeting my true affiliations.
But then I noticed that their faces were as pale, their teeth as nervously bitten, as mine.
It was a tense game for both sides, and from that came a strange respect and camaraderie
The frogs all left as soon as the game was over.
We stayed to watch the fireworks over home as the kiwis took the trophy.
Definitely the most* memorable sporting event of my life.