Skip to content
Posted on December 25, 2011January 20, 2015 by Andrew
Snowflakes that stay on my nose and eyelashes. That’s what I wanted for my first winter Christmas. The London weather reports indicated a mild winter with no snow until the new year. Determined to see snow on Christmas day, we booked a Christmas trip to Salzburg, followed by a few days in Venice.
After a very early rise, we arrive in Salzburg at about 9am on Christmas Eve and head straight to Mirabell Gardens for our first Sound of Music moment.

The old town of Salzburg is mainly made up of quaint six storey pastel coloured buildings, some of them burrowing into the hard rock. Our first stop, the Museum of Modern Art, had its entrance at ground level and then elevators that shoot you up the inside of the mountain to the gallery on the top.

The gallery was one of my favourites all year. The exhibition that really fascinated me was an artist named Evan Penny, who sculpts realistic humans and then distorts them. Some of them look perfect when you find the right spot to look from. Others you can only see with the help of a computer afterwards. (photography wasn’t allowed… but I really wanted to see how this face looked when it wasn’t stretched to the height of a doorway! 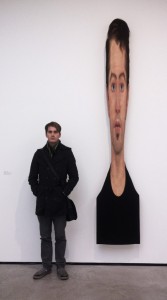 Walking from the gallery through the old town, we passed Mozart’s birthplace entirely by accident. Salzburg is the kind of city where that’s very easy to do.

The Christmas markets were still open for most of the day, and the famous Salzburg egg shop was too. I was very tempted to get some… but have terrible memories of the demise of my brother’s precious one several years after he got it all the way back from Salzburg to Auckland in one piece. When you’re born clumsy, like I was, you have to know your limitations! 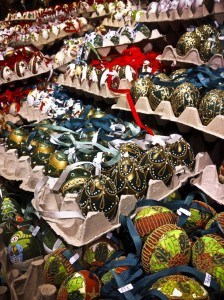 We took a bus half an hour out of Salzburg for Christmas Eve dinner, after reading rave reviews of a cute little restaurant attached to Hotel Friesacher in Anif.
We had five hours to kill before heading back into the city for midnight mass, so decided to take our meal slow. Good plan. The food was incredible, the staff were friendly, and we were able to soak in the atmosphere with an orangenpunsch drink by the open fire before and after our meal.
At Midnight, we stepped into an enormous cathedral packed to the point of overflowing with thousands of good Austrian Catholics. Though we were nearly 20 minutes early, there was no chance of a seat. The feeling inside was electric because it was so late at night, and the choir were already singing. I felt like we were all in on a secret.
The service was entirely in German (except for the bits in Latin). Oh, and it was two hours long. Did I mention this was at midnight?
Relatively unfamiliar with Catholicism, my main motivation for sitting through it was because Salzburg is where Silent Night was written. Thankfully, it was sung at the close of the service so I got my wish. (meanwhile, who knew there were so many more verses in the original German version?!) 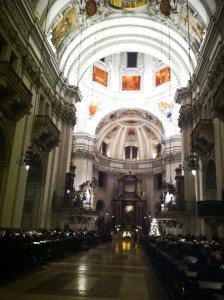 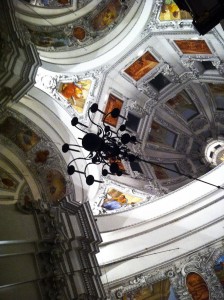 Knowing that Salzburg would be mainly closed down on Christmas day, we pre-planned our day full of trips and tours. And I was still determined to find snowflakes to stay on my nose and eyelashes.

First stop: the salt mines. Because it’s Christmas, we had the whole place to ourselves – an unintentional private tour! Our driver had the thickest Boston accent I’ve ever heard, but was confused when I asked how long he’d lived in Salzburg. Turns out he’s a native, but his relatives escaped to Boston after the war and he learned English from them. Very bizarre when someone with a perfect American accent suddenly pauses and says “I don’t know the english word for that”.

He spent over half an hour explaining how Hitler actually saved the rest of the world from the Russians, how the Third Reich was misunderstood, and how there were many fewer Jews murdered than commonly believed… we were relieved when we were alone again!

We dressed up like miners and spend about 90 minutes in the mines. The best part by far is the slides that they used to use to reach the lower mines. Strangely, most of the tour takes place in Germany, as you cross the border underground near the beginning of the trip. 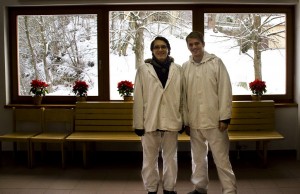 One reason to be grateful for our holocaust denying driver was that he was willing to switch things around in order to let us go up Mt Untersberg. It hadn’t been possible the day before because of the fog, and I’d been really disappointed. 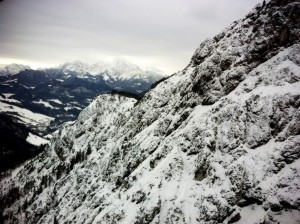 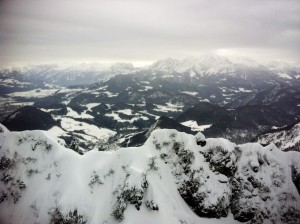 We weren’t quite prepared for what confronted us… it was way below zero and the wind chill was unreal! Snow was falling, but it was less “snowflakes that stay on my nose and eyelashes” and more like getting pelted with frozen peas. Still… I can hardly complain after getting my Christmas wish! 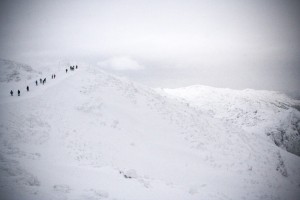 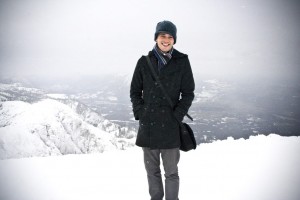 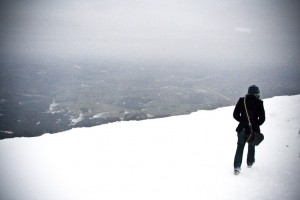 We warmed up with a hot chocolate at the top before heading back down. 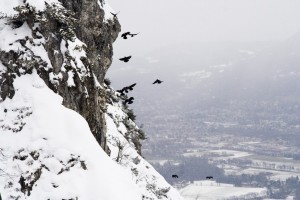 We caught the bus back to the centre of town for our next trip… the Sound of Music tour. The company billed it as the ‘most unique’ Sound of Music tour. I realised how much I’m turning into my father when this impossible phrase made me cringe.
The guy next to us was very quiet except to tell his wife that she owed him four hours. He was dumbfounded that we would choose to torture ourselves with an afternoon of the Sound of Music!
We topped off our Christmas with a meal and a Mozart concert at the Salzburg Fortress.

Back at our hotel to pick up our bags for the overnight train to Venice, we had an hour to kill. Paul’s ears pricked up, and we realised that not only were they watching the Sound of Music, but they were up to the exact point that we’d gotten to the night before!
We sat down for as long as we could, watching it and feeling a little homesick, while still buzzing about how lucky we were to spend Christmas in Salzburg.