After the drama with the car keys, it was 4:30 when we finally got on the road to Vegas. Paul read Walt Whitman aloud to pass the time.

It was still snowing like crazy, which made driving scary but photos awesome. We passed an accident that had just happened, when a woman spun out of control into a tree.

—the story gets even more interesting after the jump—

As we drove south towards Williams, the snow gave way to torrential rain. Between Williams and the drive west to Kingman the snow and rain traded places every 10 minutes or so. The wind was pushing the car around. It was a horrible drive.

As we entered Kingman, the car we had been following for an hour suddenly spun out of control into the side barrier, then did a 360 spin into the other lane. It was totalled – there were car parts littering the freeway. I had to swerve violently to avoid hitting them. Our tyres crunched as we drove over shrapnel from the accident. We had no way of knowing whether the people in the car were ok, and could see other cars stopping to help, so we had no choice but to keep driving. We were both really shaken. I felt light headed and pulled over for a few deep breaths.

The next hour or so was pretty sombre. But eventually, our silence was broken when we rounded a corner to an amazing sunset which made the rugged desert look amazing. 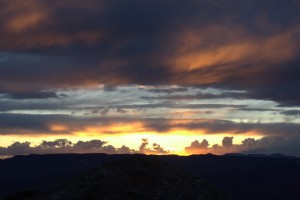 We stopped at the Hoover Dam briefly before finishing the 5 1/2 hour drive to Las Vegas.

One thought on “The dramatic road to Vegas”