Skip to content
Posted on April 15, 2012February 5, 2015 by Andrew
When we booked a trip to Belfast for the weekend of the 100th Anniversary of the Titanic disaster, we had no idea just how much the city that birthed the ship of dreams would do to commemorate it.
The Grand Old Opera House had a performance of Titanic: The Musical that began at exactly 11:40pm – the time the ship struck the iceberg. We decided this was just a little too excessive and opted instead to watch the new 3D version of James Cameron’s movie. Though on reflection it’s hardly less excessive!
There was even a commemorative voyage that retraced the route – sans sinking.
The most publicised memorial is the new museum located on the dock where Titanic was built. The modern design based on the bow of Titanic echoes the Sydney Harbour House, while the texture resembles the high seas. 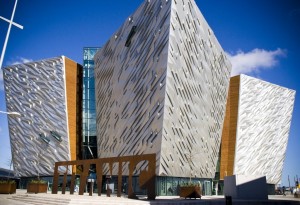 The experience is like the museum of the future – you can touch just about everything. The enormous space is separated into zone, and visitors can navigate through them freely. The first zone recreated Belfast as it was when Titanic was built, and the zones afterwards progress chronologically through the story of the fateful voyage. The sinking itself is treated tastefully – there are no tilting floors.
The most interactive section sees you carried in lowering gondola cars through the shipyard learning about the techniques that were used to create the largest ship ever built – at the time. This includes the gondola actually passing through a replica of the piece that held the propellor; to illustrate the mammoth size. 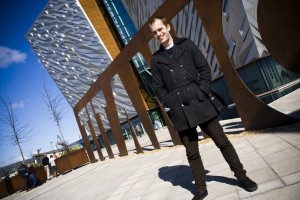 The experience makes for a fantastic few hours, and it’s not morbid at all. Belfast appears to have staked its hopes for regenerating the tourism industry on it, and though it was bound to be packed on the 100th anniversary, the reception I saw would indicate that it’s going to be a roaring success.
Elsewhere in Belfast, you can’t escape the Titanic:
But among the interesting tributes, the award for tackiest piece of self promotion easily goes to Thompson’s Family Teas for this enormous billboard. If I was the copywriter who came up with that awful, confusing, insensitive pun, I think I’d sack myself!