On our last day in Hollywood we finished off the last few things on our LA bucket list.

We tried to book rush tickets to see The Ellen Show tape live, but there was no chance. It’s a bummer, as we registered months in advance but they don’t accept anyone from outside the US unless they’re already in the country, so we had no choice but to wait for day-of tickets.

After checking out, we visited a special someone on the Hollywood Walk of Fame

Then we went all over Paramount Studios on a golf cart. The tour was great – nine people to a group maximum.

My favourite part was seeing Glee’s rehearsal space, the outside of their studio, and a few of their trailers. Yes, I am officially a sad excuse for a person.

Other highlights:
– Standing on Dr Phil’s stage, and then seeing him in person when we left

– Seeing parts of the sets for movies like The Godfather, Citizen Kane, Ghost, How to Lose a Guy in 10 Days and Spiderman
– The garden workaholic Lucille Ball had modeled to look just like her own, so she could have photo shoots with her kids and then keep working.

– Tom and Nicole’s identical front doors from eyes wide shut. He walked through the left one, she through the right. The lengths some people will go to to look taller! 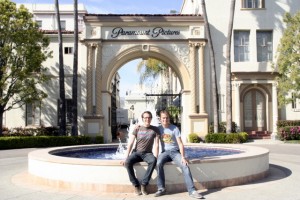 With just a few hours left until we had to head to the airport, we took the car for one last spin to The Grove, where we shared a delicious chicken pasta and red velvet cheesecake at The Cheesecake Factory to round off our time in Los Angeles.