We landed in LA just after six this morning, following a 12 hour flight. Took off to this song (one of my faves). Felt it was kinda appropriate.

Our hotel is pretty crappy… but we have an awesome location on Sunset Boulevard, so we don’t regret choosing it. Thanks to the GPS system we hired with our beaten up old Toyota Corolla, we arrived promptly at 7:30am… ready to go to bed. Which is when we remembered that check-in doesn’t open until 3pm. Aaahh! Though we were struggling to stay awake, we decided to make the most of it and do some of the necessary touristy things. So we went to the most important American icon first: Taco Bell! Then, had a quick at less important attractions like the Kodak Theatre, the Walk of Fame, and this thing: 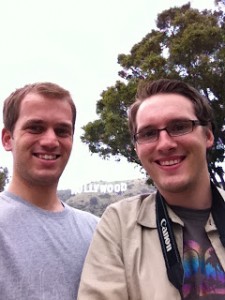 Afterwards, we headed to West Hollywood to go to Target and stock up on essentials like Sour Jolly Rancher Jelly Beans, and Coconut M&Ms. I also made the mistake of letting Paul go into a place called Book Soup, which turned out to be (and I quote) “the most amazing bookshop I’ve ever been to in my LIFE!” Luckily, he restrained himself to just two books and a magazine… which, believe it or not, was quite held back!

Settling in at the hotel now, then off to catch up with Paul’s sister Esther at her fancy hotel (on Rodeo Drive, no less!) at 9:00. It’s been a long 45 hour Saturday, but a pretty awesome start to our trip.
AA

4 thoughts on “City of Angels”