Skip to content
Posted on January 22, 2012January 20, 2015 by Andrew
Copenhagen’s central station feels like a doll’s house. The large beams are painted dark brown, so they resemble wood. The Vikings would approve, comments Kat.
This is our first trip abroad with Kat and Mikey – two of our best London friends. They hail from Adelaide. We got to know them when Kat was in Paul’s Flight Centre training group, and have caught up with them (and a few others from the group) regularly ever since.

But we’re happy to put up with whatever Mother Nature has in store for us, because we’re stoked to be here. And because it might snow.

We walk around for ages attempting to find traditional Danish food. We see Thai, Australian, Indian, McDonald’s, KFC… but no Danish. Then, the motherlode!

Right next to Tivoli Gardens; Tivoli Hallen is a family-run, traditional Danish restaurant. It’s so full of Danes that we’re worried we won’t get a seat. 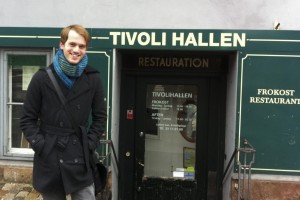 After nibbling on the dark bread, most of us order traditional Danish open sandwiches. Except Mikey, who has a thing for ordering the most traditional, weirdest thing on the menu. He goes for herring: 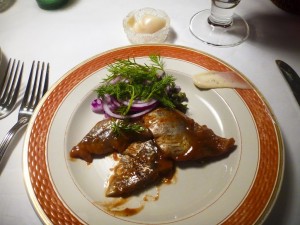 It’s basically three pieces of raw fish… not entirely my cup of tea… but I wanted to sample a bite and was surprised to find it was quite delicious!

When we stepped outside, we found ourselves in the thick of a snowstorm. The camera lens really can’t capture the thousands of thick, crushed ice blobs hurtling towards the street. 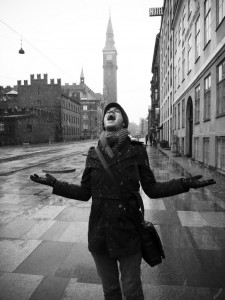 Ny Carlsberg Gyptotek proved a welcome respite from the cold. After bundling our wet coats into lockers, we spent nearly two hours exploring the sculpture gallery. A particular highlight was the small room with a domed roof that amplified the tiniest sound if you stood in the right spot. Mikey and I were occupied for ages.
Tired from our early start, we spent an hour unwinding at the hotel before heading out for dinner.
I was disappointed when we walked past the lights of Tivoli – the world’s second oldest amusement park closes over the coldest months. As does the world’s oldest amusement park, Bakken, just down the road, which opened in 1583. I guess we’ll just have to come back! 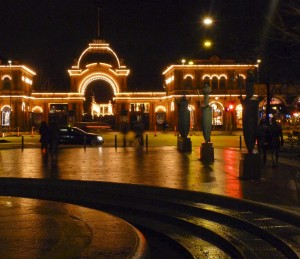 Unable to find any traditional Danish food (our lunch place had closed for the day), we tried to find a non-traditional option that still had a story worth telling. Eventually, we ended up in the first Indian restaurant in Scandinavia. That’s a win, in my book.
The next morning the weather was a little more permitting, and we explored some of the sights of Copenhagen – starting with the canals.

By the gardens, we were suddenly interrupted  by a large band of marching soldiers. The changing of the guard here is quite a spectacle. 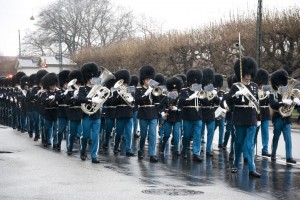 While Paul got a head start at the art gallery, Kat, Mikey and I headed to the distinctive spire of Our Saviour’s Church. Spying it earlier in the day, I’d imagined it was a fairground slide. The reality is nearly as cool – it’s an external spiral staircase offering 360° views of the city. 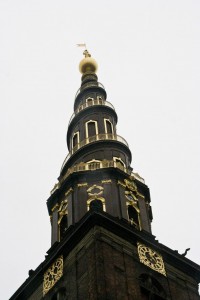 Unfortunately, the spire was closed for winter… but we were still glad we came because the inside of the church was fascinatingly Lutheran.

Waiting for the bus, we realised we were standing next to the most delicious looking Danish bakery in the world.

Where to get lunch was the easiest decision of the day.

Walking through the park towards the art gallery, we got caught in another snowstorm. Mikey and I challenged each other to catch as many snowflakes on our tongues as we could.

As soon as we left the gallery, Mikey grabbed Paul and they ran off skidding in the snow. 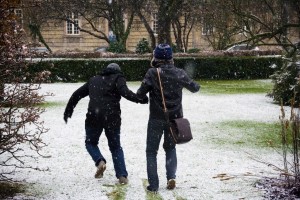 Within minutes, Paul was fulfilling a childhood dream…

Fulfilling one of my childhood dreams, we then hopped on the train to North Zealand.
It’s not Abel Tasman’s original name-giving hometown (that’s in Holland), but it’s pretty cool.

In North Zealand, we visited our third gallery of the weekend: the Louisiana Museum of Modern Art.

The view across the water to Sweden alone was worth the entry price. 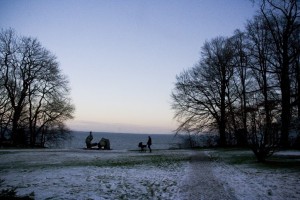 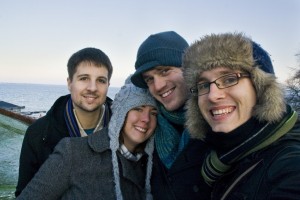 It was dark when we left. 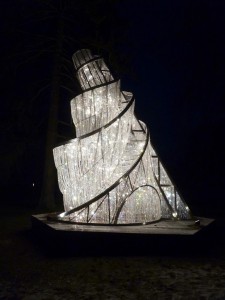 Again unable to find Danish, we enjoyed delicious Thai before leaving for the airport.

This was comfortably one of our best weekenders ever. The city, or the people? I think both.