When I made a list of all the shows I wanted to see in New York, there were 26. And I already felt like I’d squeezed out some goodies! The first big cut I made was to remove anything we could see in London, so unfortunately Wicked fell by the wayside. That killed me inside a little, because I adore Wicked and was sorry to miss it last time I was here. Luckily, there was a happy compromise in the form of Behind the Emerald Curtain.

We arrived a few minutes late, having ran from Dennis’ apartment. It felt really cool to be leaving a New York brick apartment in the morning sunshine. I would love to have that life! Even if we were feeling a little worse for wear after too little sleep, and wearing the clothes from the night before.

But the Emerald Curtain was still cool. Basically, for Wicked geeks like me, they created a tour of the Gershwin Theater that gives you a behind the scenes look at how Wicked (or really any broadway show) is brought to life. It was full of interesting information like the most expensive costume being US$35,000, and the story of the chorus girl who popped her arm out of its socket onstage. 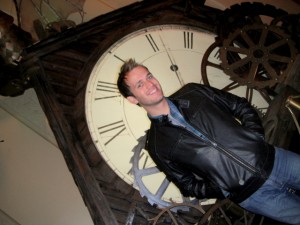 It was a full on broadway day really, because after the tour we bought tickets to American Idiot, and saw it, then had a brief rest before Catch Me if You Can. Another great, exhausting day in Manhattan.