My first impression of Madrid by daylight wasn´t great. We headed straight to the Prado  (Spain´s major art gallery which includes Las Meninas, a work often called the greatest painting ever). Unfortunately, it was raining and we didn´t have an umbrella. We also weren´t expecting queues that snaked around the building (damn you Lonely Planet for saying it would be empty!) 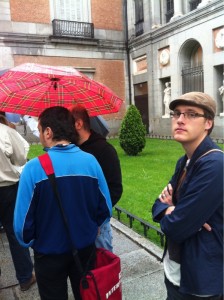 The museum itself was great (and enormous). Once we left, naturally we headed straight to the next gallery! Caixa Forum is a lesser known gallery but I would totally recommend it. It features a wall garden (pic below), and mainly newer works including (at the moment) a really cool photography exhibition covering the life of a prodigy photographer who started at the age of 8, in 1905.

The sun had decided to come out to play by the time we left Caixa Forum, so we headed into Parque del Retiro, the Madrid equivalent of Central Park, and wandered around for an hour. The highlight was the Crystal Palace, in the middle of the park. Being inside it feels like standing in the centre of a palatial greenhouse! 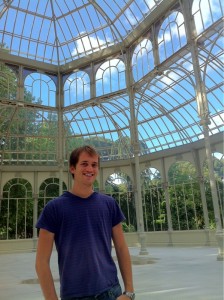 We were hoping to find a nice tapas bar for dinner, but there were no decent ones near our place, so we had a really nice kebab instead, and promised ourselves we’d do tapas tomorrow.

One thought on “Day One in Madrid: The Rain in Spain”