Skip to content
Posted on January 1, 2012January 20, 2015 by Andrew
There was a point when I was genuinely concerned that we wouldn’t make it in.
The crowd was thick and pushy. There were more Russian military than I ever thought I’d see. They were standing with linked arms blocking every entrance to Red Square. Three rows of them, and a dozen metal detectors stood between me and the whole reason I came here.
At about 11:56pm, the guards finally parted. I felt like I was leading a revolution as we surged into the already overflowing square. We became caught in the human equivalent of a rip, and it pulled us right into the centre of Red Square. I found myself wondering if anyone had been trampled. It didn’t stop pushing us forward until we were packed in so tightly that, after I picked up the camera, I couldn’t return my arms to my side until after the display had finished. 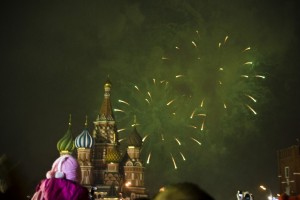 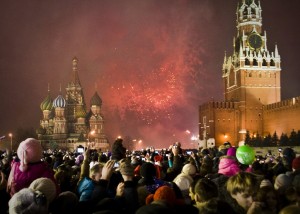 The fireworks were magnificent. The mist in the sky built up a haze behind that reflected every exploding colour.

The moment they were over, the crowd surged in the other direction.

Those of us in the middle were cordoned off by another row of army men with linked arms, and their grim supervisors behind them glaring at us. After several minutes the people all around us starting pushing into the arms of the men in uniform, surging until they lost their grip and we broke through, escaping into the crowd. I didn’t look behind me. Someone told me you shouldn’t make eye contact. 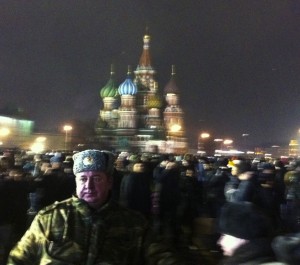 The nearest metro station was, predictably, closed due to overcrowding. We found ourselves wandering in any direction, hoping we’d stumble across another. We were just excited to have the luxury of wandering around Moscow just after midnight on New Year’s Day!
There were crowds everywhere, light displays, live music. And then snow.
It started to fall heavily less than ten minutes after midnight. If we’d made it on to the metro right away we’d have missed it! 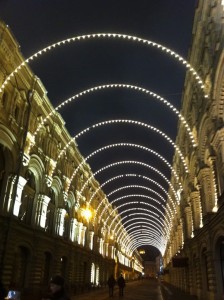 A lot hasn’t gone to plan on this trip to Russia. But, as I open my mouth and allow snow crystals to melt on my tongue, I know that this night made it all worthwhile.