Skip to content
Posted on December 31, 2011January 20, 2015 by Andrew
Our second day in Russia was all about serendipity. After dismally failing to see ice sculptures the night before, I had googled my little heart out and learned about the annual Vyugovey Ice Sculpture Festival, which had apparently opened only two days earlier.Again, we didn’t get ice sculptures. It turns out that not only is the All-Russian Exhibition Center absolutely enormous (not so much an exhibition center as a suburb), but it is most definitely not hosting a Vyugovey ice sculpture festival (thanks to this website for putting me wrong!) So, instead of just getting a long walk and some muddy boots to show for it, I got a long walk through a bizarre communist version of a business park! Which was actually pretty cool.

The first thing we discovered was the Monument to the Conquerors of Space, which is was made out of titanium in 1964 to celebrate Soviet achievements in space exploration. 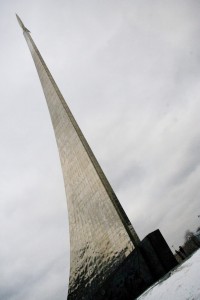 As we walk into the park we’re surrounded by buildings like this one. It’s creatively named “central pavillion”. Inside are some tacky market stalls and an aquarium with sharks. I kid you not. Stalin would turn in his grave!

Though bummed we’d missed ice sculptures for a second time, we felt lucky that we’d had the chance to explore such an unusual, empty, space that could only exist in a Soviet country.

One thing that takes a bit of getting used to in Moscow is the metro system. 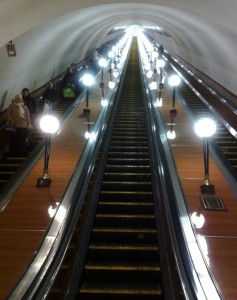 …and bronze statues and chandeliers everywhere… 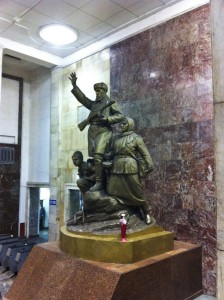 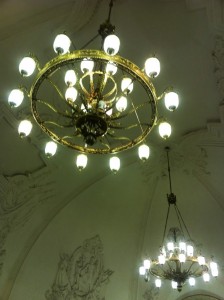 …but the metro map is in Russian. Now this is logical of course, except there’s nowhere to pick up a copy except the hotel. And the hotel gives you a copy in English.

So, on our map, our stop is called Izmailovsky Park.

Every other station’s name is similarly warped between our map and the actual system.
Again, this would be doable, except there’s nowhere down inside the metro with a complete map, just a list of stations.
We ended up getting on in the wrong direction, walking in massive loops, or standing in confusion while trains whizzed past just about every time we disappeared down there!
Our last stop of the day was the Tretyakov State Gallery.
It was closed.
I’m getting used to that!