Skip to content
Posted on January 1, 2012January 20, 2015 by Andrew
We opened our windows this morning to a glorious sight: 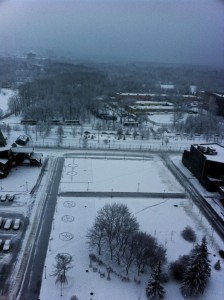 We packed up and checked out quickly, eager to see how the night of snowfall had altered the landscape.

We headed back into the centre of town to see Lenin’s memorial (which has his frozen body), as it had been closed on the other days of our visit.

But it was worth coming in to see the white blanket over now familiar landmarks.

After saying goodbye to Red Square, we trekked to the train station to pick up our overnight train tickets and drop off our luggage. We got lost, of course, but I won’t bore you with the details!
By the time we finally made it to the Pushkin Museum it was early afternoon. For once, we managed to visit something that was actually open! Although they had a strange entrance system that involved only letting in about 10 people every 15 minutes… so the queue was over two hours long. And it wasn’t half cold outside! It was deserted inside. I felt sorry for those still waiting.
Thankfully after the long wait, the museum was impressive. They had a breathtaking Caravaggio exhibition on.

It had been dark for a long time by the time we left the gallery. We headed straight to Gorky Park; the Muscovite equivalent of a Winter Wonderland.

An enormous field of rather sad looking snowmen greeted us. 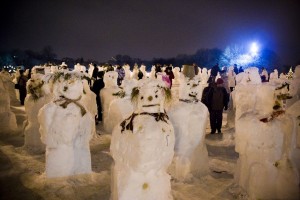 Unfortunately, the incredible looking ice skating arena was closed for the day. We were disappointed, but not as much as the hordes of Russian families with ice skates. I can’t figure out why so many attractions in Moscow publicise old opening hours, or don’t put holiday season closures on their website. It does get a little frustrating!

Ah well. Nothing like a mulled wine in a cute little pop-up café to make up for it. 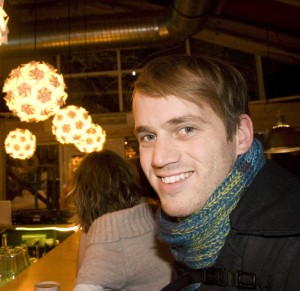 Our train left Moscow just before midnight, bound for St Petersburg. I love sleeping on trains, knowing I’ll be hurtling across the countryside while I sleep.