Day One in New York. March 30th, 6am Eastern Standard Time. From here on in we shoot without a script. See if anything comes of it (sorry, couldn’t resist the Rent reference).

Our flight to New York was one of the worst ever. It was only five hours long, but because of the time zone change, that was all the night that we got! Talk about red eye. We were sitting in the back row, right next to the loos which also meant we had the flight attendants chattering behind us. and our seats didn’t recline. But we had little blue pills to help us sleep.

We arrived at 6am having dozed a tiny bit. Sunrise from the airtrain was stunning. Our hostel is in the most amazing location ever. 30 second walk from Times Square. Awesome!

It’s freezing here. SO glad that we brought gloves. After ogling Times Square and buying tickets to the matinee of Memphis, we headed to Top of the Rock – the viewing platform at the Rockefeller Centre. 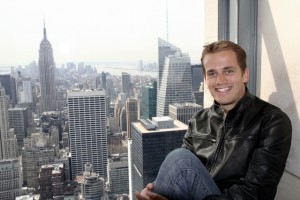 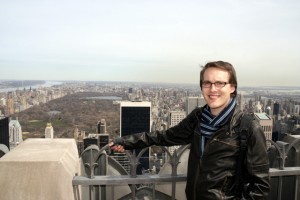 After Memphis, we took the subway to the east village and ate dinner at Veselka, a Ukranian place that Lonely Planet ranks as the best restaurant in North America!

Then, exhausted, we headed off-broadway to a preview of Tony Kushner’s new play, which we had pre-booked. It was four hours long. We both fell asleep about 20 times. In the first intermission (did I mention it was four hours long?) we went out and bought Red Bull and sour lollies. Every time my head started nodding, I popped a Lemonhead. Saved my life. Shame the play was av.