Skip to content
Posted on June 29, 2012January 20, 2015 by Andrew
Where East meets West. That’s what I’d heard about Istanbul. Knowing it was a heavily Muslim city, I pictured it exactly like Marrakesh, with snake charmers in the public square, Eastern architecture, and calls to prayer over loudspeaker a few times a day.

When we first arrived, part of me was a little disappointed: what I saw was more West than East. Most of the architecture was clearly European, and there were no snake charmers – not where I was, anyway! But I soon discovered that Istanbul has a fascinating layer under the surface, and if you are prepared to look a little deeper, it does live up to its reputation.

To state the obvious: you need more than a day in Istanbul. I was lucky enough, arriving here as the last stop of Busabout’s incredible Ottoman Trek, to already know that I’ll be back for another single day in September. So I made a slightly unusual choice, and decided to divide the city into two manageable chunks – seeking only to complete one of them this time around.

This is The Antipodean’s guide for half of Istanbul in a day; I’ll publish a follow-up post in September offering the other half in a second day.
1.  The Grand Bazaar
Renowned the world over as a visual feast of colour, the Grand Bazaar does not disappoint. It feels more ordered than the markets in Morocco, and it’s easier to stay oriented. Gift idea: the metal-shops all sell little spice grinders. They’re beautiful, inexpensive, very Turkish, and will even fit in your already overstuffed suitcase. Take your time finding the best one – there are subtle variations – then pretend not to like it and test your talent for haggling! 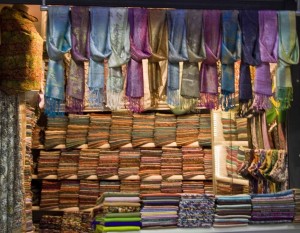 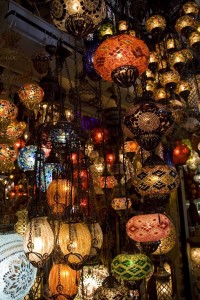 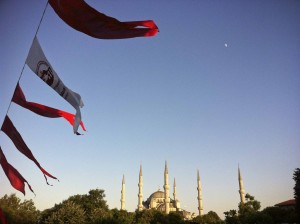 3.  Hagia Sophia Mosque
This mosque is 1,000 years older than the Vatican. Let me say that again. This mosque is a thousand years older than the Vatican! And it actually spent its first thousand years as a church, before being converted into a mosque in 1453 (when it was still the largest cathedral in the world). The €12 entry fee seems steep after a week of Eastern-European prices, but don’t let it scare you off. This is considered the pinnacle of Byzantine architecture for a reason! 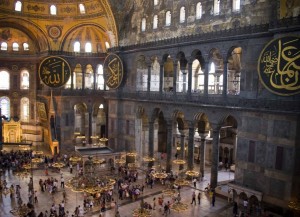 4.  Turkish tea and snacks
I won’t go as far as recommending a place, because finding your own is half the fun! But find out whether they use fresh or powdered apple in their apple tea – and keep looking if it’s not fresh. Save room for at least two types of baklava and turkish delight – and may I suggest that one of those is pomegranate turkish delight wrapped in pistachios. (I finally understood why Edmund is so won over by the stuff in The Lion, The Witch, and The Wardrobe!) 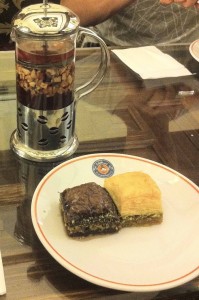 Defying the usual tourist-trap laws, the main Turkish baths by the Grand Bazaar are meant to be wonderful. However, in line with expectations, they’re also very expensive! So we chose Gedikpaşa Hamamı, built in 1475. I entered the baths with an acute sense of culture shock, and left feeling fantastic. Keep an eye out on Flight Centre UK’s blog for the full hilarious account of my Turkish Bath experience (I’ll link to it here once it’s been published). 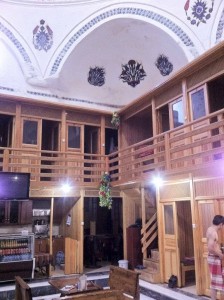 6.  Dinner at Palatium
“Do you serve falafel kebabs?” Ally has a craving. “Yes”, replies the restaurateur. “Also, we have an underground Roman palace” he adds nonchalantly. Sold! And thus began my love affair with Palatium (just one street over from Busabout’s base at the Sultan Hostel). Arriving early, we quickly nabbed the beanbags on the outdoor balcony area, because they’re on glass and you can glance down at the palace while nibbling your mains! This is not the cheapest restaurant in Istanbul, but it’s still very reasonable by Western standards, and they served the best food I’ve tasted in months. I really can’t rave enough: Palatium was my unexpectedly wonderful discovery in Istanbul. 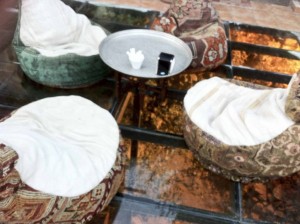 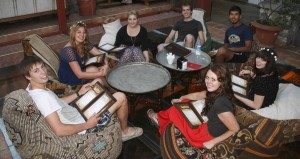 After our meal at Palatium, we ventured down to see the palace. It was far bigger than anticipated, and really something! We decided, for some unknown reason, to practice the Bulgarian dancing we’d learned a few days earlier at the gypsy dinner in Sofia.

The security guard who snapped us mid-dance thought we were deranged.

Getting caught Bulgarian dancing at midnight in an underground Roman palace beneath a wonderful restaurant in Turkey… I can’t think of a better ending for the Ottoman Trek! 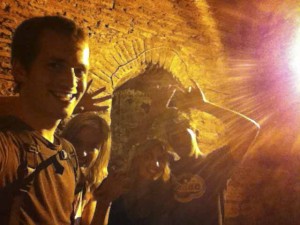