We got up early this morning and left the Cinque Terre by train. We almost missed it because we stopped to get one last slice of potato and rosemary focaccia bread for the trip, but thankfully we managed to run on in time.


In Pisa we had to walk with our luggage for about half an hour to reach the leaning tower. We didn’t want to do the silly tourist photos, but then decided that we had to. We retained our dignity by doing every single tourist pose we could think of, so anyone watching would know that we were commenting on the silliness of it all rather than actually being sucked in too. Which of course we weren’t… 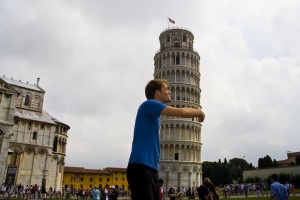 We then had a stinking hot walk/bus/walk to pick up our rental car in the middle of nowhere. Found it eventually, then sought brief solace in an air-conditioned supermarket before continuing on our trip.
The weather packed in almost as soon as we started driving. So as if driving on the wrong side of the road in a manual with crazy Italian drivers wasn’t enough, now I had thunderstorms to deal with! The overhead motorway announcements quickly lit up with orange warnings featuring exclamation marks.
The thunderstorm was almost a flash flood, and the motorway started filling with water. When a truck passed on the other side of the centre barrier, it sent a torrent of water on to my windscreen with a huge whack, and I couldn’t see a thing for about five seconds, which any driver will know feels terrifying!
But we made it to Florence, eventually.