When we first got stuck in Naples I could feel today would teach me a Life Lesson.

Though I’d already been driving for five hours since leaving Rome, there was a grit to Naples that I appreciated having the chance to see. I planned to call the Life Lesson “Always Set Your GPS to Avoid Tolls”.

How wrong I was! Avoiding tolls meant we had to drive from one end of Naples to the other (and it’s huge!) in standstill traffic. On the motorway we would have paid maybe €3 in tolls and it would have taken half an hour. Instead, it took two and a half hours, and cost untold in petrol!

Though it was nice to see Mt Vesuvius up close, this is the main thing I will remember about Naples:

As some redemption, the last half hour of our drive to Positano took us further around the coast to Sorrento right on sunset: 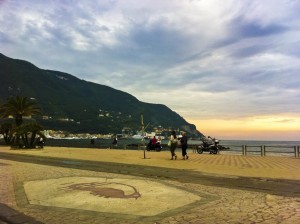 Then, after winding our way around hairpin bends on impossibly thin roads next to sheer cliffs dropping straight down to the rocks, we were greeted with this view as the last of the sunset streaked across the horizon: 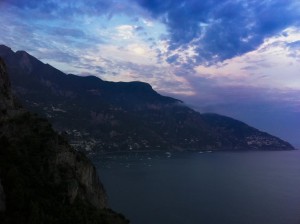 A great end to a hopelessly over-complicated drive!