Skip to content
Posted on April 4, 2011February 5, 2015 by Andrew
Ground Zero affected me more than I thought it would. I came here five years ago, but things have changed a lot, mainly after a little museum opened late last year. We were both quite surprised at how it got under our skin. There was a school choir going through too, and when they finished they sang a beautiful song which was quite moving to be there for. We were also able to see some of the construction work on the memorial park (opening in September on the 10 year anniversary) and the new towers that are going up in the space.
We needed a breather after leaving, so opted to walk to the Brooklyn Bridge rather than take a subway. Despite the overcast sky, we still found the view from the bridge breathtaking.

After walking over the bridge and back, we hopped on the subway north to the Guggenheim Museum.

From there, we headed to Columbus Circle to catch up with Matthew Windsor, an old friend I hadn’t seen for years who (I was excited to learn) is working for the ACLU in the UN building! (jealous much?)

A few hours later, after seeing a crap show, we met up with Roxie (the kiwi we met at our hostel a few days ago) and went to the Empire State Building together. We’d heard the only way to beat the queues was to go late at night (it closes at 2am), which fitted nicely with our schedule. It was eerily quiet, which we found really cool. I definitely recommend going after midnight.

We decided to walk back – it’s only about a dozen blocks, and we got to pass through Times Square. 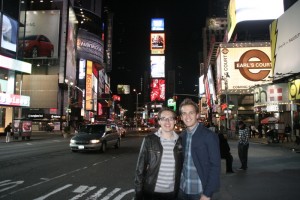 By the time we got home it was about 2am. I didn’t get to sleep for at least another hour, which was partly from nerves (London is starting to loom) and partly because Snoring Lamp Man was in particularly good form.
AA