Skip to content
Posted on February 11, 2012January 20, 2015 by Andrew
I just bought a new life on eBay.
When we found out our bid for the new flat we wanted in King’s Cross was successful, I went OCD fast. There were lists. Within hours, I had saved hundreds of bargain priced fridges, rugs, vacuum cleaners, microwaves and couches to my watchlist. Each time I won an auction for something big, I added it to my map for moving day. Before long, there was seven hours worth of driving to do, picking up everything we needed.
The highlight was a £5 couch.When moving day came, I got up at 7:30 and caught the train to King’s Cross to pick up the van. It was just casually -6° at the time. Then I got lost for 20 minutes in East London while the GPS figured out I wasn’t still in Italy, crossed just about every bridge straddling the Thames, was briefly caught up in a film shoot on Vauxhall Bridge, and eventually picked up a fridge in Chelsea.

By 11:00, Paul and I had loaded all our possessions in the back of the van, in a three dimensional puzzle around the fridge. We did a final idiot check, bade farewell to our home of five months, and continued on our way.

Drove back across town. Picked up keys in Islington. Got call from Virgin when we were 5-10 minutes away; “we’re on our way to connect your broadband, we’ll be there in 5-10 minutes”. Drove faster. Beat Virgin. Couldn’t unlock door. Rang landlord. Used correct key. Let ourselves in less than 20 seconds before Virgin arrived.

Our broadband was up and running before we had a single box inside. Beats the five week wait we had last time!

We got a workout getting all Paul’s books and the fridge up the stairs. No prizes for guessing which weighed more. Before we had the chance to sit down, we had to keep moving because we were already running late for all the eBay pickups I’d scheduled.

At 6:00 we picked up the microwave, just over halfway to Brighton.

At 7:00 we drove past Costco and decided to go in on a random masochistic impulse. At 7:10 we left Costco, too overwhelmed to try.

At 7:30 we arrived at IKEA. At 10:00 IKEA closed. At 11:00 we finally left IKEA. At 11:45 we arrived home, feeling like we’d sold our souls to Swedish elves wearing perfectly starched blue and yellow aprons.

Try as we might, our comfy £5 couch was too wide to squeeze up the stairs.

So we did what any tired antipodeans would do under the anonymity of darkness. We gifted our £5 couch to the city. 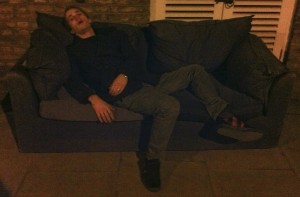 Unfortunately, our night wasn’t over yet. We still had to fill up the van and return it. Not too difficult, considering the car hire place was less than a kilometre away. Except London is very busy at 1am on a Saturday night. And the first petrol station the GPS sent us to was closed. The second was cash only. The third looked abandoned. On our way to the fourth, somewhere in St John’s Wood , we finally drove past one. I broke multiple road rules swerving in, determined not to let this one get away too. We bought a ribena sipper bottle to celebrate.

By the time we got home to our new flat, it was well after 2am. Exhausted doesn’t scratch the surface. Surrounded by boxes, we unwrapped the new mattress we’d picked up from IKEA for our landlord, and slept on the floor.